Birth of an Encyclical: Priest Documents Preparation of ‘Humanae Vitae’ 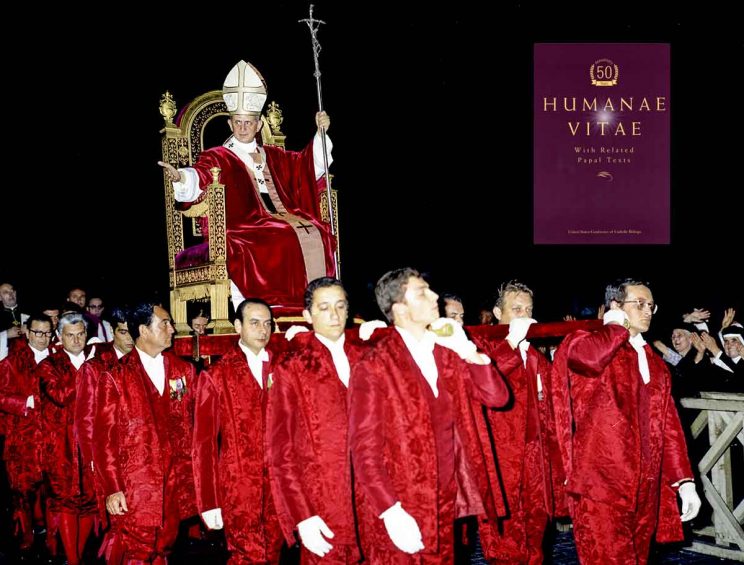 Pope Paul VI is carried in procession on the “sedia gestatoria,” a ceremonial throne, in this undated photo. Pope Paul, who served as pope from 1963-1978, was declared blessed by Pope Francis Oct. 19. He is most remembered for his 1968 encyclical, “Humanae Vitae,” which affirmed the church’s teaching against artificial contraception. (CNS photo/Giancarlo Giuliani, Catholic Press Photo)

Documents in the Vatican Secret Archives and the archives of the Congregation for the Doctrine of the Faith prove it was a “myth” that Blessed Paul VI largely set out on his own in writing “Humanae Vitae,” the 1968 encyclical on married love and the regulation of births.

The results of his research were published in Italian in early July in the book, “The Birth of an Encyclical: ‘Humanae Vitae’ in the Light of the Vatican Archives.”

In a note to reporters, Msgr. Marengo said his research revealed four little-known facts: Pope Paul approved an encyclical, “De Nascendae Prolis” (“On a Child’s Birth”), in early May 1968, but was convinced by translators in the Vatican Secretariat of State that it still needed work; a new draft was corrected by hand by Pope Paul; on several occasions the future St. John Paul II sent suggestions, including an extensive treatment of the theme, but there is no evidence that they were used heavily in the final document; and Pope Paul asked the 199 bishops at the 1967 world Synod of Bishops to send him reflections on the theme of the regulation of births.

Msgr. Marengo said the request to the synod members was a surprise. It is not included in any report about the synod itself.

“The news about the desire of the pope to consult all the members of the synodal assembly is very important,” he said, “because one of the accusations repeated most often after the publication of ‘Humanae Vitae’ was that the pope decided to act alone, in a manner that was not collegial.”

The pope received only 25 responses in the period between Oct. 9, 1967, and May 31, 1968, Msgr. Marengo said. And, perhaps more surprising, of those, only seven bishops asked Pope Paul to repeat the Catholic Church’s teaching against the use of contraceptives.

The other responses — including a joint U.S. response from Cardinal Lawrence Shehan of Baltimore, Cardinal John Krol of Philadelphia, Archbishop John Dearden of Detroit and Bishop John Wright of Pittsburgh – exhibited an openness to the use of artificial birth control in some circumstances, however “none of them would say that using the pill is a good thing,” Msgr. Marengo told Catholic News Service.

“The pope never thought of proceeding alone, putting the collegial profile of the Petrine ministry in parentheses,” Msgr. Marengo wrote.

But consultation is not the same thing as taking a vote. And bishops were not the only ones asked for their input. Long before the synod, and before Pope Paul was elected to lead the church, St. John XXIII had appointed a small committee to study the issue of the regulation of birth.

Pope Paul expanded the commission, which included several married couples. The commission’s work ended in 1966 with the leaking of a report by the majority of members asserting artificial contraception was not intrinsically evil; minority reports, insisting contraception was morally wrong, were leaked in response.

After reading the commission reports and the bishops’ input, Msgr. Marengo wrote, Pope Paul “found himself in a situation that was not easy. His judgment had matured, and he felt obliged in conscience to express it in virtue of his apostolic ministry, knowing well that going in that direction would place him at a predictable and painful distance from sectors of the church community that were not marginal.”

In fact, less than a week after the encyclical was published, Pope Paul held a general audience and spoke about just how weighty the decision was. “Never before have we felt so heavily, as in this situation, the burden of our office,” he said July 31, 1968. “We studied, read and discussed as much as we could; and we also prayed very much about it.”

For Msgr. Marengo, the process of drafting “Humanae Vitae” cannot be understood without recognising the changes in the church unleased by the Second Vatican Council, including on the theme of marriage and parenthood.

“Since the council in ‘Gaudium et Spes’ recognised ‘responsible parenthood’ as a value – changing in a fundamental way the vision of marriage – the idea of many was that it required a change in the church’s sexual morality as well,” he told CNS.

“The difficulty for Pope Paul VI was in how to explain that the use of contraceptives was not licit, but to do so in the light of an affirmation of responsible parenthood,” he said.

The encyclical’s emphasis on the “inseparable connection” between the “unitive and the procreative” qualities of married love, he said, marked a significant change in church teaching from before Vatican II; previously, the church taught that the primary purpose of marriage was for procreation.

Blessed Paul’s personal work in rewriting the encyclical’s “pastoral directives” also reflects the teaching of Vatican II, he said. Previously, “the magisterial task was to explain, and the pastoral task was to tell people to accept.”

“‘You must obey’ was the classic pastoral approach,” Msgr. Marengo said.

But, he said, “Pope Paul broke this schema, saying, ‘I will explain the teaching and if you try to understand it, you will see that it is true and is what is best for you.'” By Cindy Wooden Catholic News Service