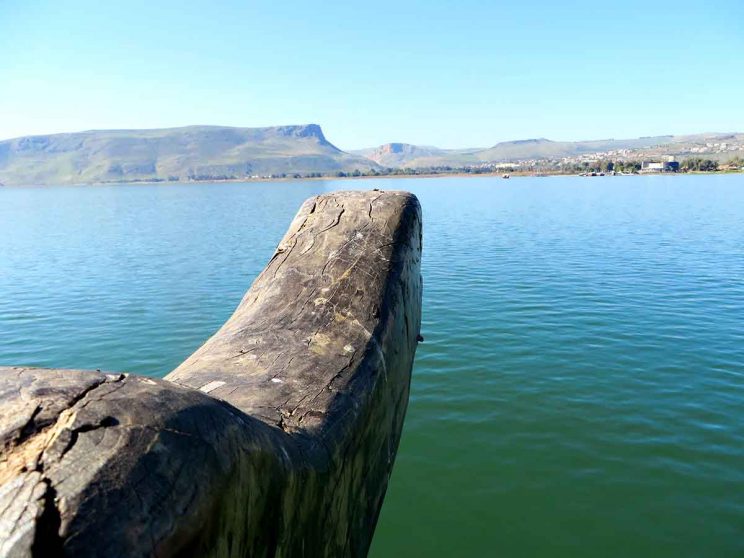 The Sea of Galilee is usually placid, but in storms its waves can reach heights of four metres. It was during one such storm that Jesus controlled nature. (All photos: Günther Simmermacher)

Water features prominently in the Bible. Following on from Fr Ralph de Hahn’s article last week, Günther Simmermacher picks five important events in the gospels which took place at, in or on the water.

In biblical times, as today, water was vital: to be hydrated, to stay clean, to produce crops, to raise livestock. Water was life. So it is no accident that so many crucial events in the Gospel take place around water: the Sea of Galilee, the River  Jordan, and the various wells and healing pools.

Moreover, Jesus used the imagery of water to communicate the promise of eternal life.

Here are five Gospel moments taking place at, in or on water.

Pilgrims renew their baptismal vows at the River Jordan. • The authentic spot of Jacob’s Well, where Jesus met the Samarian woman, is now in the crypt of a Greek Orthodox church in Nablus, West Bank

It’s the event that serves as the inauguration of Jesus’ public ministry. At this point, John the Baptiser is the more famous man, but in proclaiming himself as only the one who prepares the way for the Lord, he officially declares Jesus in charge.

The Church accepts as the authentic site of the baptism Bethany Beyond the Jordan, a place in Jordan where early Christians built monasteries and pilgrim facilities.

With the Muslim conquest in the 7th century all that fell into disuse. But note the Arabic name of the site: al-Maghtas, which means baptism or immersion.

Holy Land pilgrims can renew  their baptismal vows there: on the eastern bank in Jordan, or on the other side in the occupied West Bank which bears the name Qasr el-Yahud, or Gate of the Jews.

This is the spot where ancient tradition holds the Jews entered the Promised Land at the end of their exodus from Egypt. So if this is indeed the site of the baptism of Jesus, it is symbolic that the public ministry of the Messiah who speaks of a different Promised Land launched his public ministry at this place.

One can’t really speak of one moment on the Sea of Galilee. Much of Jesus’ public ministry took place on and around the Sea of Galilee: Jesus calling the fishermen to follow him, the feedings of the multitudes, the walking on water, the expulsion of the demons into the herd of swine, the preaching of many parables and so on.

In the gospel narratives, the Sea of Galilee is not just a location; it’s a leading character in its own right.

This is especially so when Jesus commands the lake to stop misbehaving.

Jesus is with his disciples in a fishing boat when a violent storm erupts. This usually placid lake can become wild in storms, caused by winds from the Golan Heights. When that happens, typically at night, waves can go as high as four metres.

So the disciples have good reason to fear for their lives — while Jesus keeps on sleeping soundly. Eventually roused from his sleep, and taken to account by the disciples for his apparent indifference to their safety, Jesus tersely commands the wind: “Quiet! Be still!” And, like a rebuked child, the wind obeys and the waters calm.

The disciples are awed by this man’s ability to control nature (which they have seen before and still they marvel at, as would we today). And while they are still going, “Who is this guy?”, Jesus berates them for their lack of faith.

The lesson is that when we have faith, there is no need be afraid.

Of course, it’s not a lesson that sticks — not with us, and not with the disciples. Soon after the calming of the storm, Simon Peter attempts to walk on the water—and sinks.

Jesus’ noon encounter with the Samarian woman is a scandal. For one thing, she’s not like us — she’s a hated Other, a Samaritan. Jews did not consort with Samaritans and vice versa, even if they were in Samaria, as we find Jesus here.

So that’s pretty bad. But the real scandal is the woman herself, with her many ex-husbands and now a live-in boyfriend.

And Jesus knows about it, yet he does not shun her! More than that: he treats her with humour and respect. And then he has her become the first non-Jewish missionary.

It is an extraordinary story in many ways. The most important lesson, of course, is that Jesus announces the distinction between the water we need for life and the Living Water which we are invited to drink for eternal life.

The location is also of symbolic importance: near Sychar (or  Shechem), the modern Nablus in the West Bank, at a well which was founded by Jacob, the progenitor of the Twelve Tribes of Israel.

Jacob’s Well still exists, in the crypt of an attractive Greek Orthodox church which was built over predecessor churches going back to the earliest time when Christians could build churches.

And like Jesus’ new friend, the woman of many divorces, we can still draw water there today.

A model of the Pools of Bethesda as it was in the 1st century AD. To the surprise of the experts, it was exactly as St John had described it in his gospel when it was excavated in the 19th century. • The reputed rock on which the Risen Christ cooked the fish breakfast in the church of Peter’s Primacy at Tabgha at the Sea of Galilee.

If Jesus was causing scandal in Samaria, he topped that in Jerusalem. There was the overturning of the tables in the Temple which exercised the religious and political establishment, and the talk about being the King of Jews would get him killed. For that, we can give the Sadducees and the hand-wringing brutalist Pontius Pilate a disapproving sideward glance.

But the Pharisees — mostly good people of faith, but rigoristic about the law and thus very judgmental — were none too pleased with Jesus either. For one thing, they didn’t appreciate Jesus’ theological claims. For another thing — and here’s where the scandal kicks in—Jesus was rather loose with the law.

Jesus overstepped the law twice in one go when on a Saturday he healed the man who had been paralysed for 38 years, at the Pool of Bethesda. Firstly, he had no business healing people on the Sabbath, neither at healing pools nor elsewhere. That was quite bad.

But it’s what he did next that was even worse: He told the man to pick up his mat and walk away with it. He incited another Jew to violate the Sabbath. John mentions that this was why “the Jews persecuted Jesus, and sought to kill him”. Certainly the Pharisees, who had tried to outsmart Jesus before on points of the law, now had their smoking gun.

Strangely, for a very long time, Scripture scholars believed the story to be apocryphal, perhaps added later by an overzealous editor with a knack for a good metaphor: the word “Bethesda” means “House of Mercy” or “House of Grace”. But it also could mean “disgrace”, giving it a double meaning: disgraceful for the presence of society’s rejects, and a place of grace or mercy for the water’s healing properties.

Since there was no evidence of such a pool, the scholars believed it was intended as a metaphorical story, written by somebody who had never seen the Pool of Bethesda or even knew Jerusalem.

Then, in the mid-19th century, the Turks handed the Crusader church of St Anne’s to the French, who restored it. Excavations nearby revealed the ruins of an old basilica — and the remains of a pool, with the five porticos John had described. John had indeed been there.

The ruins of the basilica and pool still exist today.

Even in the post-Resurrection narrative, the Sea of Galilee plays a starring role.

Having appeared to the Apostles in Jerusalem, Christ sent them back to Galilee, to wait there for further instruction. So they immediately set to returning to their jobs, possibly still rubbing their eyes at the strange experiences of the previous weeks, and unsure about what would happen next.

They’d soon find out. But presently we encounter some of them just before dawn in their boat, after a night of fruitless fishing. As they are ready to call it a night, a stranger on the shore tells them to cast the net to the other side. It would not spoil the suspense to reveal the outcome of that.

Having recognised the stranger, Peter swims ashore, while the others battle with the rich catch.

After the fish breakfast which Christ had cooked them, we get to the nub of things: the Apostles are to set out into the world to spread the Good News of salvation. That thing about being fishers of men is only just beginning.

And Peter, who had to make a triple oath of love for the Lord, is appointed head of the new Jesus Movement.

Ancient tradition places all that at a place called Tabgha, on the north-western shore of the Sea of Galilee, the place of seven springs, near where Jesus fed the multitudes.

Three storage towers stood there in Jesus’ time, to hold water for irrigation. The fresh water from the springs would have made the tiny bay there ideal for washing and fixing fishing nets.

Perhaps it was here where Jesus first met these fishermen, at the beginning of his public ministry.

A small stone church marks the spot of that post-Resurrection appearance. It is called St Peter’s Primacy, though for those Christians who don’t believe in papal primacy, the alternate name is Mensa Christi, the Lord’s Table, after the rock in the church on which, by tradition going back to at least the 4th century, Christ cooked that fish breakfast.

Next to the church is a boulder on which, tradition suggests, Christ stood as he gave fishing tips to the Apostles.

In short order, the Apostles returned to Jerusalem and eventually spread out all around the world they knew.