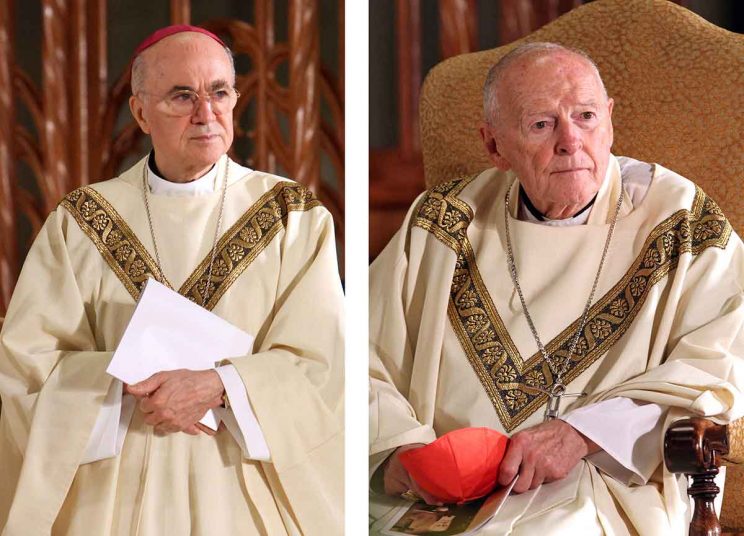 Archbishop Carlo Maria Vigano, then nuncio to the United States, and then-Cardinal Theodore E. McCarrick of Washington, are seen in a combination photo during the beatification Mass of Blessed Miriam Teresa Demjanovich at the Cathedral Basilica of the Sacred Heart in Newark, N.J., Oct. 4, 2014. (CNS photo/Gregory A. Shemitz)

Archbishop Carlo Maria Vigano, the former nuncio to the United States who accused Pope Francis and church officials of failing to act on accusations of sexual abuse, urged a top Vatican official to release documents that would prove his allegations.

“Your Eminence, before I left for Washington, you were the one who told me of Pope Benedict’s sanctions on McCarrick. You have at your complete disposal key documents incriminating McCarrick and many in the curia for their cover-ups. Your Eminence, I urge you to bear witness to the truth,” the former nuncio wrote.

He also called on leaders of the U.S. bishops’ conference, who had a private meeting with Pope Francis Sept. 13, to say if the pope refused “to carry out a Vatican investigation into McCarrick’s crimes and those responsible for covering them up.”

Archbishop Vigano, who has been in hiding after publishing Aug. 25 his “testimony” against Pope Francis, also defended his decision to write the document and to reveal in it alleged facts that were “covered by the pontifical secret that I had promised to observe.”

Pontifical secrets, he said, are meant “to protect the church from her enemies, not to cover up and become complicit in crimes committed by some of her members.”

“I was a witness, not by my choice, of shocking facts and, as the Catechism of the Catholic Church states, the seal of secrecy is not binding when very grave harm can be avoided only by divulging the truth,” Archbishop Vigano wrote. “Only the seal of confession could have justified my silence.”

In the new letter, Archbishop Vigano continued his accusations about homosexual clergy having great influence in the Vatican and with Pope Francis. And he expressed disappointment at how, in his view, Cardinal Ouellet had given up his defense of Catholic orthodoxy.

“At the beginning of Pope Francis’ pontificate, he had maintained his dignity, as he had shown with courage when he was Archbishop of Quebec,” Archbishop Vigano wrote. “Later, however, when his work as prefect of the Congregation for Bishops was being undermined because recommendations for episcopal appointments were being passed directly to Pope Francis by two homosexual ‘friends’ of his dicastery, bypassing the cardinal, he gave up.”

As of early Sept. 28, neither Pope Francis nor current Vatican officials had commented on the accusations in Archbishop Vigano’s original document; instead, Pope Francis told journalists Aug. 26 to “read it yourselves carefully and make your own judgment.”

“I will not say a single word on this. I believe the memo speaks for itself and you are capable enough as journalists to draw your own conclusions,” the pope had told reporters traveling back to Rome with him from Dublin.

In the weeks that followed, preaching on the day’s Mass readings, the pope delivered several homilies in which he noted Jesus’ humility and silence when unjustly insulted and accused.
“In difficult moments, the moments in which the devil is unleashed – where the shepherd is accused especially by the Great Accuser through many powerful people – the shepherd suffers, offers his life and prays,” the pope said in his homily Sept. 18 during morning Mass in the Domus Sanctae Marthae.

Archbishop Vigano said the homilies contradicted Pope Francis’ initial response to remain silent, and he accused the pope of putting “in place a subtle slander against me” during the celebration of the Eucharist “where he runs no risk of being challenged by journalists.”

“When he did speak to journalists, he asked them to exercise their professional maturity and draw their own conclusions. But how can journalists discover and know the truth if those directly involved with a matter refuse to answer any questions or to release any documents?” Archbishop Vigano asked.

Members of Pope Francis’ international Council of Cardinals had confirmed in a Sept. 10 statement that “the Holy See is formulating possible and necessary clarifications” in response to the former nuncio’s allegations against the pope. By Junno Arocho Esteves Catholic News Service

Steve Lincoln, Auckland, New Zealand - The letter by Pope Francis to the People of God on the question of...