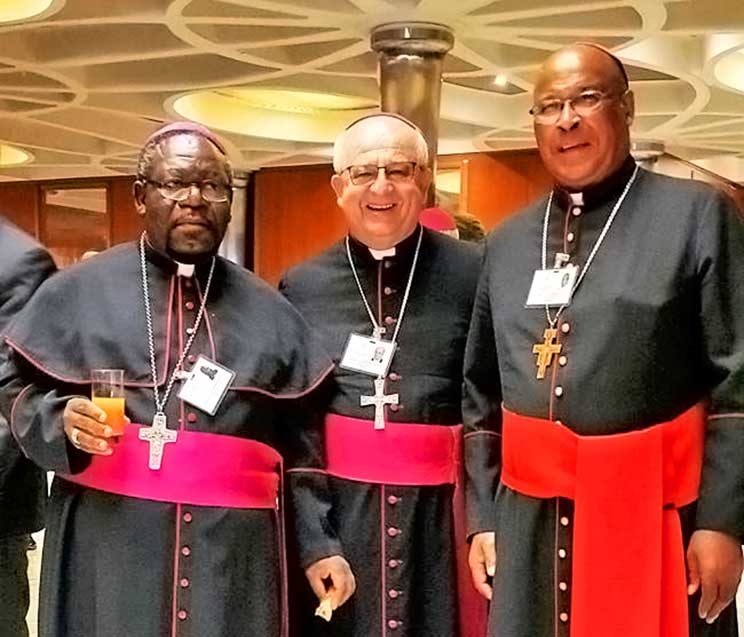 Bishops Siegfried Jwara and Stanislaw Dziuba with Cardinal Wilfrid Napier at the Synod of Bishops in Rome.

Staff Reporter & Cindy Wooden – Cardinal Wilfrid Napier has hailed Pope Francis’ genius in following the two synods of bishops on the family with the current one on youth.

The cardinal-archbishop of Durban said that in the process of reforming and renewing the Church, Pope Francis and his advisers had been wise to focus first on the family and then the youth, because “youth are the next ones forming the family, so let’s get them on board in this new way of more positive thinking about the Church”.

Cardinal Napier is one of three South African bishops to represent the local Church at the Synod for Youth which will run until October 28. The others are Bishops Stanislaw Dziuba of Umzimkulu and Siegfried Mandla Jwara of Ingwavuma.

The cardinal identified as one of the main challenges in the ministry to young people that the youth need the “feeling that they belong to the Church, that the Church is welcoming them. We must bring them in to know Jesus Christ, and learn to do it by seeing their elders” having a relationship with Christ, he told Vatican Radio.

Another challenge, he said, is the secular influence on young Catholics.

“There is this drive by the world media, and world ideology, to take over the minds of young people and pull them in a certain direction,” Cardinal Napier said.

A religious Sister called on the synod to trust young people “to design what a welcoming and open Church is and looks like today”.

Young Catholics can “challenge all the people of God in living our common purpose of revealing God’s love”, said US Sister Sally Hodgdon. “Can we let go and walk the path with them?”

In addition to the horror of the sexual abuse scandal, she said, Church members betrayed young people “through non-acceptance, a lack of integrity and transparency and a lack of authentic Gospel living”.

Reversing that, Sr Hodgson said, could be done by expanding parish and diocesan leadership to include young people and giving them “the freedom to lead in a different way”.

A French bishop told the synod members they must “speak freely about sexuality” and find ways to provide sexual education to young people, including seminarians.

“Too often, young people discover sexuality through the prism of pornography or the embarrassed silence of older generations,” said Bishop Emmanuel Gobillard, auxiliary of Lyon.

Young people have also had their say at the synod, telling the pope and bishops that they no longer want to remain on the sidelines but want to take an active role in the Church.

“Young people don’t just want to be treated as such,” said Silvia Retamales of the Chilean bishops’ youth office. “We need a different and open Church that doesn’t close the doors on social, sexual and ethnic minorities.”

The role of women in the Church, she added, must also be strengthened in areas “of real decision-making and participation in our communities”.

Cardinal Dieudonné Nzapalainga of Bangui, Central African Republic, said the key question before the synod is: “What is God trying to tell us through young people?”

Finding better ways to pass the faith on to younger generations is one part of the task. The other part is to encourage them and support them in sharing the faith with others.

Prominent evangeliser Bishop Robert Barron, auxiliary of Los Angeles, proposed a “renewed apologetics and catechesis” to help young people who are tempted to leave the Church due to convictions “that religion is opposed to science or that it cannot stand up to rational scrutiny, that its beliefs are outmoded, a holdover from a primitive time, that the Bible is unreliable, that religious belief gives rise to violence, and that God is a threat to human freedom”.