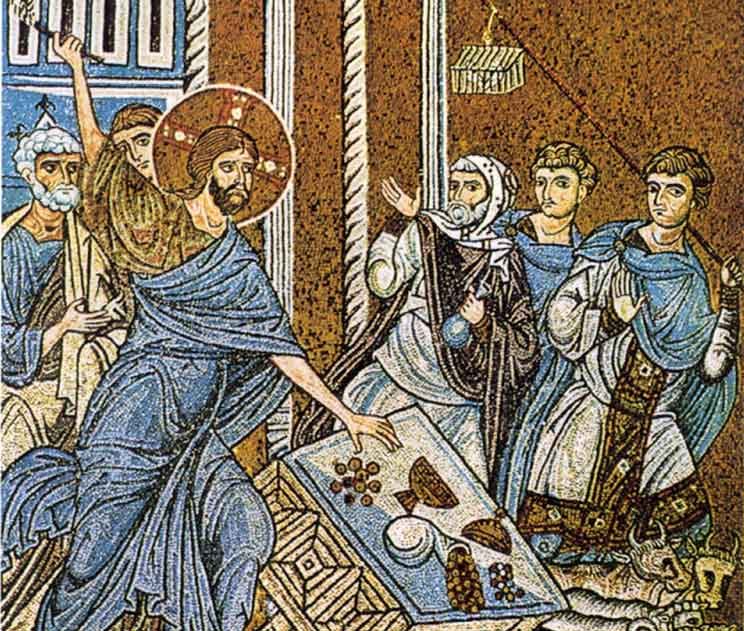 In the Cleansing of the Temple, Jesus quoted a passage from Isaiah 56:7, namely: “My house shall be called a house of prayer for all peoples” (Mk 11:17). The American theologian Brant Pitre reflected on Mark 11 and offers the following understanding of the scripture text.

By Fr John Atkinson – A little background on the cleansing of the Temple by Jesus can be useful to understand the context of Jesus’ quoted words from Isaiah 56.

In 19 BC, King Herod built on some extra space to the Temple for the sacred use of Gentiles. In this added space, the Gentiles — the non-Jews — who were seeking to honour and worship the God of Israel would be welcomed.

What happened in the meantime was that trade started to take place in the Court of the Gentiles. During the time of the Passover, Jews and non-Jews came from all over the world to pay their respects and offer their sacrifices in the Jerusalem Temple. They needed sacrificial offerings like doves and sheep and were prepared to pay for it by different world currencies. And therefore, the money changers would assist them by providing the means whereby the different world currencies were exchanged for the used currency in Jerusalem.

Jesus’ anger was addressed to these traders who took up the sacred space of the non-Jewish people who came to worship and pray to the God of all nations. These traders occupied the meeting place of the Gentiles and the true God.

By quoting Isaiah 56:7, Jesus’ mind was on the prophecy of Isaiah. Starting with the 4th verse of Isaiah 56, the prophet speaks about eunuchs.

There were three types of eunuchs, namely those born as such, secondly those made eunuchs by men, and thirdly those freely giving themselves to be eunuchs (Matthew 19:12).

The prophet says that eunuchs should not see themselves as non-producing individuals — they should not say to themselves, “I am naught but a barren tree” (Isaiah 56:3) — but know that they will be richly blessed.

For thus saith the Lord unto the eunuchs that keep my sabbaths, and choose the things that please me, and take hold of my covenant;  Even unto them will I give in mine house and within my walls a place and a name better than of sons and of daughters: I will give them an everlasting name, that shall not be cut off

And therefore, the Lord makes a promise in saying: “I will give, in my house and within my walls, a monument and a name better than sons and daughters; an eternal, imperishable name will I give them” (Is 56:5).

This prophecy continues to tell about foreigners who will come to love and worship the one true God, those who will respect the Sabbath and will rejoice in the presence of God in the house of prayer.

We should also recall that the ministry of the priesthood exclusively belonged to the Jewish priests, yet the prophet Isaiah further says that God will welcome foreign priests whose “holocausts and sacrifices will be acceptable on my altar” as part of his divine intention (Is 56:7].

Recalling the prophecy of Isaiah 56, Jesus’ cleansing of the Jerusalem Temple from traders who misused the Court of Gentiles points to the greater salvation plan of God for  “all races and tribes, nations and languages” (Revelation 7:9].

This biblical insight tells us that Jesus wanted his hearers to remember this prophecy and the importance of the eunuchs and their pertinent role at the altar for the spiritual good of all peoples of the whole world.

Therefore, the celibate priesthood should be cherished and respected as coming from God. God gave the Hebrew people, through the voice of Moses, instructions how he wished to be worshipped. Jesus came to fulfil this old covenant and established a new covenant in which he divinely instructs “all nations” of the envisioned celibate priesthood.

This feeds our ability to answer with confidence the questions: “Who am I? What is my destiny?”

Fr John Atkinson is the administrator of the diocese of Oudtshoorn.

We Can Find God in Addiction – Thomas Weston SJ