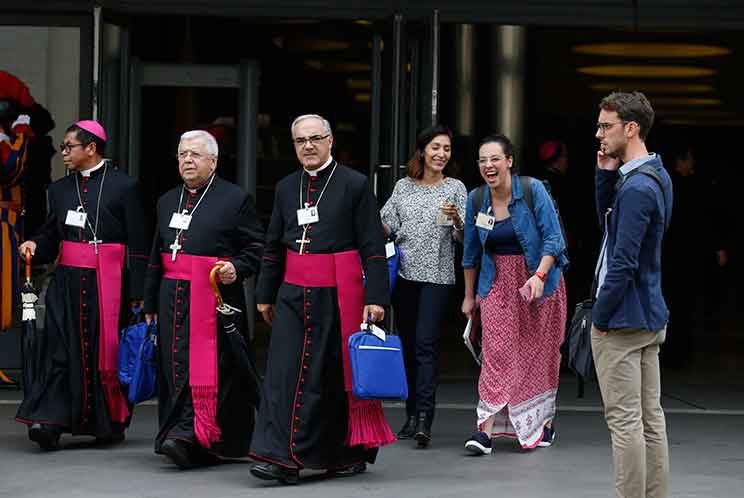 Bishops and youth delegates leave a session of the Synod of Bishops on young people, the faith and vocational discernment at the Vatican. (CNS photo/Paul Haring)

Young people from around the world told Pope Francis and members of the Synod of Bishops that they no longer want to remain on the sidelines but want to take an active role in the church.

Young men and women from Chile, Argentina, Australia and Panama were among the delegates who addressed the synod in its opening days and spoke candidly about their hopes for the Catholic Church to address the challenges they face in the modern world.

“Young people don’t just want to be treated as such,” said Silvia Retamales, a member of the Chilean bishops’ youth office. “We need a different and open church that doesn’t close the doors on social, sexual and ethnic minorities.”

As the church in Chile continues to face a growing crisis regarding sexual abuse and cover-up by members of the clergy, Retamales told the synod members that young Catholics in the country are “crying out for a structure that totally avoids any disposition that encourages, allows or covers up any form of abuse.”

The role of women in the church, she added, must also be strengthened in areas “of real decision-making and participation in our communities.”

“I would like to be part of a church in which everyone has a place and in which the voice of each member is considered without ‘demanding’ a certain prototype of faithful, in a profound encounter with the diversity in which Christ manifests himself,” Retamales said.

Many young men and women, he said, “live under the scourge of poverty – young people with their social, economic and cultural rights violated, wounded by the exclusive systems we are immersed in and that do not favour equality, equity and justice for true human development.”

The Youth as Part of the Solution

For Yithzak Gonzalez, a youth minister and executive secretary of the youth office of the Panamanian bishops’ conference, the church should reconsider “the methods that are used to achieve a coherent and responsible discernment that doesn’t turn us into a statistic: unemployed youths, delinquent youths, youths who neither study or work, youths with alcohol and drug problems, etc.”

“We want to be part of the solution to conflicts. We believe that young people must be the first authors and promoters of their personal fulfillment,” Gonzalez said.

Sebastian Duhao, a member of the youth council in the Diocese of Paramatta, Australia, recalled his experience playing saxophone in a youth choir, where he quickly learned that if he “wanted to be able to play alongside the youth choir, I would have to learn to play by listening.”

“The church needs to create similar spaces, where young people can voice their opinions, their hopes, their needs and their struggles, without being judged,” Duhao said. “The church, like I had to, must learn to use its ears, to listen to the world around it, to listen to what is required of it and, most importantly, to listen to the voices of young people because we have something to offer. By Junno Arocho Esteves Catholic News Service