The Graces of an Ireland Pilgrimage 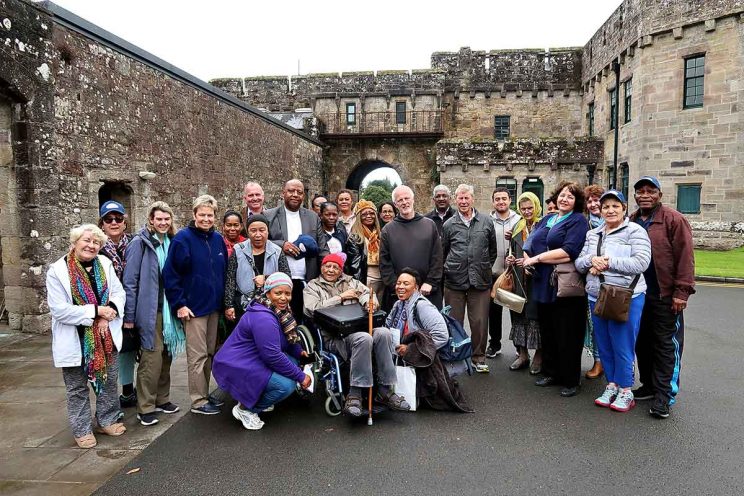 The Southern Cross pilgrimage to Ireland in August was a journey of faith with moments of tourism —  and sometimes the two happily coincided, as Günther Simmermacher found.

The Southern Cross pilgrimage to Ireland was bookended by a visit to the Marian shrine of Knock on its anniversary and the papal Mass at Dublin’s Phoenix Park, on the second and penultimate day respectively.

These events provided the focus for the previous two articles. Of course, the group, led by Bishop Victor Phalana of Klerksdorp, had many more great spiritual and secular experiences — and in Ireland these often intersect.

One such place is St Patrick’s Rock, or the Rock of Cashel, in County Tipperary, a short way from Limerick, where we had stayed overnight in the posh Savoy Hotel.

The Rock of Cashel is the ruin of a magnificent 13th-century cathedral. There is always something romantic about ruins. One can put the human power of imagination to work, forming a picture of how things might have been when the structure was in its full glory.

Although the cathedral was the site of battle — in 1647 Oliver Cromwell’s English army massacred Irish troops, civilians and Catholic clergy who took refuge there — it was ruined not by warfare but by an Anglican archbishop of avaricious or mad disposition.

In 1749 that archbishop, Arthur Price, decided to remove the roof of what was regarded as the jewel of Ireland’s cathedrals. The lead content of the roof was valuable for the production of ammunition. He never replaced the roof. So Cashel lost a great cathedral but gained what would become a hugely popular tourist attraction.

For Christian pilgrims, the site has religious significance. It was here that St Patrick converted the king of Munster, opening the way for the evangelisation of Ireland. This means that St Patrick’s famous explanation of the holy trinity through the medium of a three-leafed clover, the shamrock, happened at this place.

The traces of English colonialism of Ireland are everywhere. Earlier that day, we had visited Glenstal Abbey, a Benedictine monastery and boarding school located in an old private mansion near Limerick.

Glenstal Castle was built by the English Barrington family which did not let the Irish forget that their country’s 12th-century invasion was authorised by Pope Adrian IV, the only English pontiff. A relief in stone of King Henry II on the entrance portal to the castle indicates as much.

On the other side is Henry’s wife, Eleanor of Aquitaine (like Henry, now without a nose). She is holding a scroll which is supposed to issue the Gaelic greeting, “Céad Míle Fáilte” (A hundred thousand welcomes”). But the local stonemason who did the carving surreptitiously changed the spelling from “fáilte” to “fealtn” to mean “A hundred thousand upsets” (or betrayals). The Barringtons evidently didn’t notice. 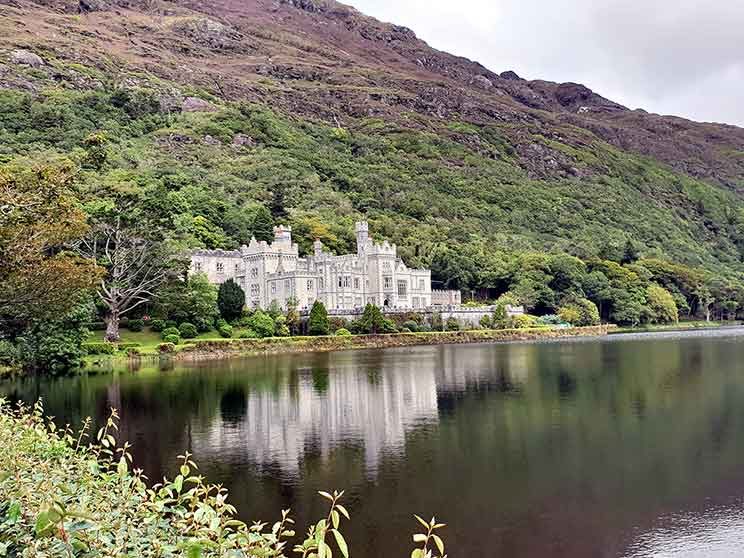 A day earlier our group had visited another private castle bought in the 1920s by displaced Belgian Benedictines to be turned into an abbey with a boarding school.

Kylemore Abbey, in the Connemara region of County Galway, is as pretty a sight as one will ever see. From across the lake in front of it, the castle looks like the setting of a fairytale.

Alas, the story behind it has no happily-ever-afters. The ostentatious castle was built in 1868 by Mitchell Henry, an English politician and industrialist, as a gift to his wife Margaret. Their happiness did not last long: in 1875 Margaret died at the age of 45 while touring Egypt, and the widower thereafter spent little time at Kylemore.

In tribute to his beloved wife, Henry built a small gothic church on the grounds of Kylemore, and a mausoleum to hold her (and, eventually, his) remains.

The castle was bought in 1920 by Belgian Benedictine nuns who had lost their convent in Ypres during the battles of World War I.

The nuns set up an international boarding school for girls, and a day-school for locals. The school closed in 2010, and its premises are now used as a retreat and conference centre.

Some of the rooms used by the Henry family are open to the public, as are the chapel and the walled Victorian gardens. The large number of tourists there testify to Kylemore Abbey’s popularity. Some of them joined our group for Mass in the Pax Benedictine church on the grounds. 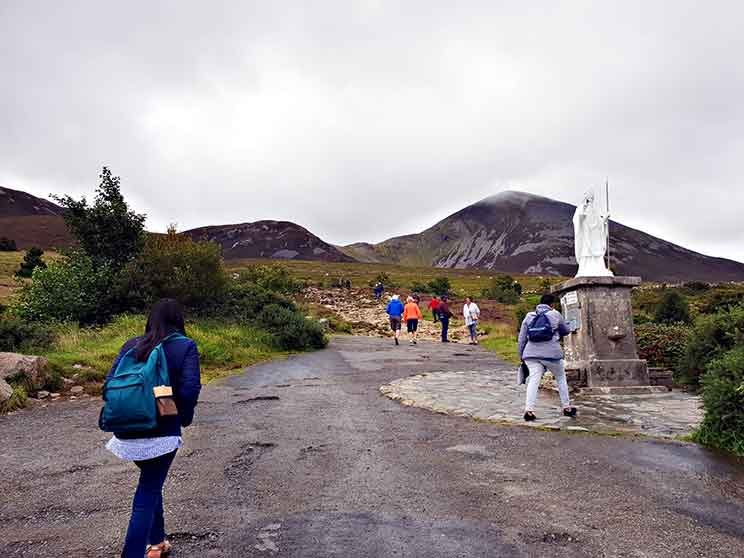 A pilgrimage to Ireland invariably involves St Patrick. We encountered him at the Rock of Cashel, and in County Mayo at Croagh Patrick, the mount on which the evangelist spent 40 days and 40 nights in fasting and penance in 441 AD.

The walk up Croagh Patrick, which measures 764m, is popular with hikers and pilgrims. Many of the latter traditionally do so barefoot to reach the small chapel on the summit, built in 1905.

Our group had no time to do that walk — around four hours either way — but had the opportunity to walk the first few steps on it.

St Patrick is also present at the splendid 13th-century Dublin cathedral bearing his name, built near where the saint performed baptisms.

It is one of Dublin’s three cathedrals, and the seat of no bishop. St Patrick’s was taken over by the Anglicans during the Reformation, as was the even older Christ Church cathedral. The latter is the seat of the Church of Ireland’s bishop of Dublin; St Patrick’s serves as the national monument for all of the country’s 12 Anglican dioceses.

The Catholic archbishop has his seat at St Mary’s pro-cathedral, which was consecrated in 1825, a time when the harsh anti-Catholic penal laws were easing (our group had the first Mass of the pilgrimage in its St Kevin’s oratory).

A pro-cathedral is a church that serves temporarily as a cathedral, pending the construction of a proper cathedral or a change in circumstances. One such change might be if the Church of Ireland were to return one of the cathedrals it took over in the Reformation to the Catholic Church.

St Patrick’s would be a good candidate, though one wonders what would happen to the monuments and graves of the many Anglican notables buried there, including the author Jonathan Swift, who served as the cathedral’s dean.

Among the many points of interest in St Patrick’s cathedral is an old wooden door which gave rise to the phrase “to chance one’s arm”.

In 1492, two Irish families — the Butlers of Ormonde and the FitzGeralds of Kildare — were involved in a violent feud which forced the Butlers to take refuge in St Patrick’s.

When the FitzGeralds turned up there, they asked the Butlers to come out with a view to negotiating a peace. The Butlers were understandably wary of being slaughtered should they do so. So the head of the FitzGeralds ordered that a hole be cut into the cathedral ’s wooden door, and then put his hand through the door to shake the Butlers’ hands.

Reassured by this gesture of peace, the Butlers emerged to make peace.

The “Door of Reconciliation” is displayed in the cathedral. 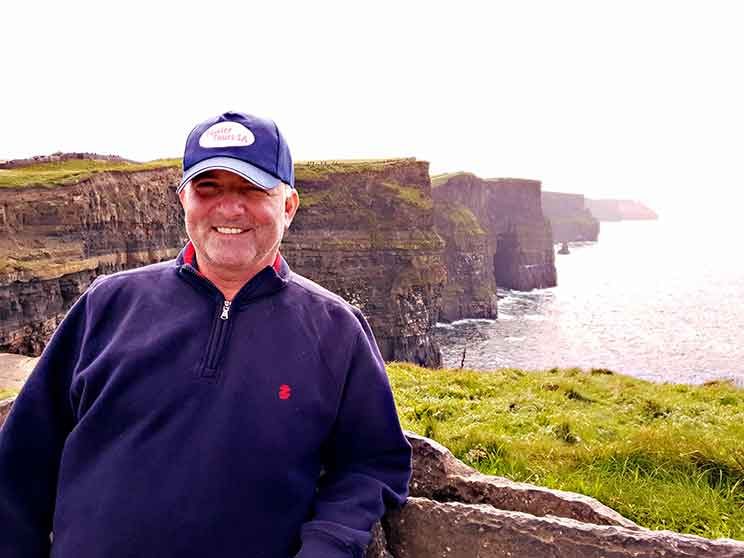 Besides St Patrick, Ireland has two other patron saints: St Brigid and St Columba. We had little contact with the latter, but encountered St Brigid (c.453-c.525) a couple of times.

In Kildare the cathedral named after her (now belonging to the Church of Ireland) occupies the place where St Brigid founded Ireland’s first monastery, a complex that included houses for nuns and monks, and the oak church that gave Kildare its name (Cill Dara, which means “church of the oak”).

A model in the cathedral recreates the probable set-up of the complex, as well as the dress of the people in that time.

We also encountered St Brigid at the well named after her in Liscannor, near the magnificent Cliffs of Moher in County Clare. Located unobtrusively on the side of the road from the cliffs, St Brigid’s Well is one of Ireland’s oldest sites of pilgrimage — indeed, it is probable that it was already a holy site for pre-Christian pagans.

A statue of St Brigid, encased in glass, stands in a small garden from which one enters a narrow wellhouse. Inside pilgrims leave votive items, and the bereaved place relics of their late loved ones. At the end of the grotto is one of two streams of water on the site. Pilgrims traditionally take a sip from that water.

With all these artefacts of dead people — including rosaries, statues, ID cards, ties, photos and funeral leaflets — the place is slightly unsettling. But it is also very evidently a place of healing for those who left these items there and prayed at the site. It is a place of grace.

All pilgrimages are journeys of spiritual discovery and of graces. On our way to the airport, Bishop Phalana invited pilgrims to testify their moments of grace, which some did.

Of course, there are many graces. Some are obtained by a visit to a holy shrine, or by prayer and revelation, or by interaction with fellow pilgrims. Many of these graces may reveal themselves to the pilgrims long after they have returned home.

One grace we collectively experienced was the weather. 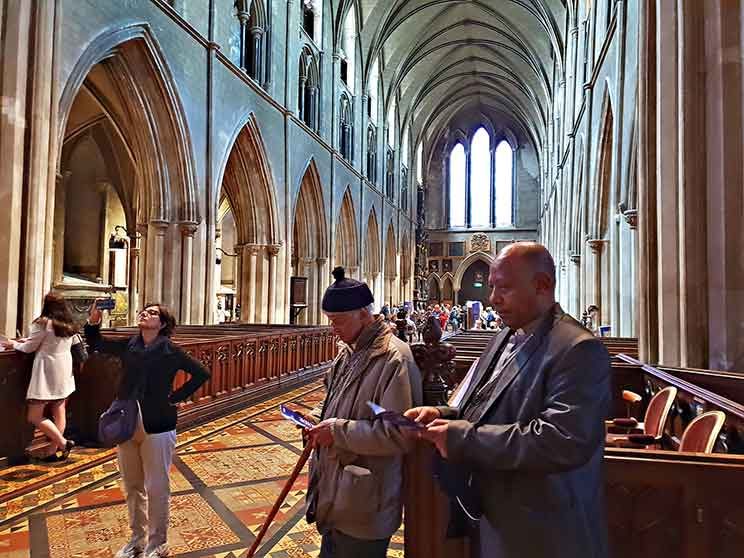 It was uncanny: whenever it rained — which was quite often — we were either travelling on the bus or otherwise indoors. When the bus stopped, it would cease raining, and resume when we were back on the bus — at least those of us who were in good time; a couple of our group were drenched in a sudden rainstorm at the previously perfectly dry Cliffs of Moher which began exactly two minutes before we were supposed to be on the bus.

Even when heavy rains were forecast on the day of the papal Mass in Dublin, the worst we suffered was a little drizzle. Thank you, St Scholastica! And thank you St Anthony for running interference when needed.

And thanks be to God for an enriching and safe pilgrimage. Moladh go deo le Dia.

This concludes Günther Simmermacher’s three-part series on the pilgrimage to Ireland. Join The Southern Cross next year in the Holy Land & Rome with Fr Russell Pollitt SJ in May and in Catholic France with Bishop Joe Sandri in October. For details see www.fowlertours.co.za

Read the rest of the series
Pilgrimage to Ireland in Pictures
The Church in Ireland is Still Present
Knock: A Place Where Our Lady Was Silent