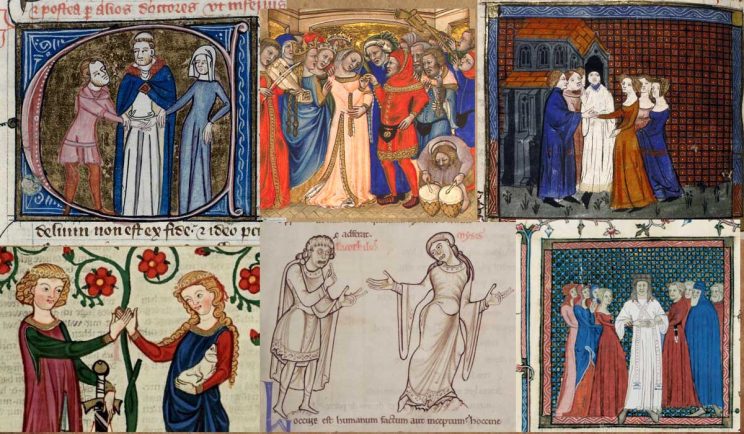 Gospel: Mark 10:2-16 – And Pharisees approached and tested him, asking him whether it is lawful for a man to divorce his wife. But in reply he said to them, “What did Moses command you?” And they said, “Moses permitted inscribing a writ of separation and divorcing.” And Jesus said to them, “Because of your hard-heartedness he wrote this commandment for you. But from the beginning of creation ‘male and female he created them; for this cause a man shall leave father and mother, and they shall be two in one ﬂesh; thus they are no longer two, but rather one ﬂesh. What therefore God joined together, let no man separate.” And when they were again in the house the disciples questioned him about this. “And he says to them, “Whoever divorces his wife and marries another commits adultery against her; and if she, having divorced her husband, marries another, she commits adultery.”  And they brought small children to him that he might touch them; but the disciples scolded them. But seeing this Jesus was deeply annoyed and said to them, “Let the little children come to me, do not prevent them; for of such is the Kingdom of God. Amen, I tell you, whoever does not receive the Kingdom of God like a little child certainly may not enter into it.” And, enfolding them in his arms and laying hands upon them, he blesses them.

What We Think We Know

“This ‘telephone’ has too many shortcomings to be seriously considered as a means of communication. The device is inherently of no value to us.” – Western Union internal memo dated 1876.

“I do not believe the introduction of motor-cars will ever affect the riding of horses” –Mr Scott-Montague, MP, in the United Kingdom in 1903.

“The wireless music box has no imaginable commercial value. Who would pay for a message sent to nobody in particular?” – David Sarnoff’s Associates rejecting a proposal for investment in the radio in the 1920s.

“Who the hell wants to hear actors talk?” – H.M. Warner (Warner Brothers) before rejecting a proposal for movies with sound in 1927.

“There is no reason anyone would want a computer in their home.”  – Ken Olsen (President, Chairman, and founder of Digital Equipment Corp) in 1977.

Our history as the human species shows that we desperately cling to what we think we know often long past its’ sell by date. George Bernard Shaw noted that, “All great truths begin as blasphemies”.

Beyond religious fundamentalism, intolerance has just as often come from within the ranks of the scientific community itself. As Arthur Schopenhauer recognised, an important idea or truth must ‘endure a hostile reception before it is accepted’ “…First, it is ridiculed. Second, it is violently opposed. Third, it is accepted as being self-evident.” The dictum that “science progresses funeral by funeral” proves that scientists are just as much victims of the human condition as the rest of us, with all the prejudice and frailties that entails.

In today’s gospel, Jesus points out how in the course of every period, we as the human community always tend to take the easy way out. This is a normal turn of events. Then eventually someone like Moses comes along and makes something official although it was originally just a spontaneous compromise. It was intended to suit a particular circumstance. Now all of a sudden it takes on the force of a law, wearing the mask of orthodoxy.

Jesus teaching on marriage, the rights of woman and children brought together in this passage calls on us to dig deeper and to look wider into the context of gospel living, marriage, family, law and custom.

As always we begin by placing ourselves within the context of Jesus teaching. The Pharisees are setting a trap for Jesus. There is the matter of secular power; will Jesus denounce the divorce and remarriage of King Herod as John the Baptist has done? We know that King Herod and his new bride, his brother’s ex-wife, do not take kindly to any criticism.

There is the matter of religious authority; will Jesus contradict the laws of Moses? Wherever religious authority is entwined with political power, truth and justice gives way to expediency. Then there are the matter of culture and traditions; will Jesus estrange the people by talking out against the dominant patriarchal structure? Jesus own mother Mary was herself a child bride, given in marriage without any modern notion of “consent”.

Jesus avoids all the pitfalls and the arguments of casuistry and goes directly to the Creators’ original intent; that the two should become one as the “image of the living God”.

Karl Rahner wrote that the first light shed by divine revelation on the secular reality of marriage resulted in the human realisation that God in transcendence was outside the sphere of marriage. Marriage is essentially a reality of the created world which has significance in life here and now. Marriage is a good gift of creation, but one which belongs strictly to this world. It is within marriage that the essential fellowship of humanity can be fulfilled in the most meaningful and human way.

This worldly quality of marriage as a human commission is always closely linked to the prevailing historical situation which is subject to development, since human existence is a reflective existence.

The history of salvation began in the misty dawn of humanity’s existence. The mists were slow to clear because our ancestors were at first concerned with living, and only gradually grew into a self-questioning being who was concerned to discover the meaning of his or her life. This is why it is impossible for the Christian view of humanity and of human marriage and family life to be a pure datum of revelation; it is more the result of a reflective human existence illuminated by revelation.

Our very living as human beings is in itself a view of life and of the world. This view is not contradicted by revelation. It is corrected by revelation where correction is needed, and received by it into a transcendent sphere of life. The biblical ethos of marriage, bears clear traces of the prevailing view of the position of woman in society.

Marriage a Sacrament After 11 Centuries of Christianity

It took eleven centuries of Christianity before the social elements peculiar to the earlier secular form of marriage contract were incorporated into liturgical ceremony as sacrament. What had previously been secular became liturgical; and what had previously been a civil contract, made within the family circle and supplemented by a priestly ceremony of blessing or veiling, became a single liturgical whole conducted by the priest. From the eleventh century onwards jurisdictional power over marriage transferred from the secular to the church’s sphere.

It is also clear from the history of the church in the first eleven centuries that marriage was experienced as a secular reality which, because of its moral and religious implications, required special pastoral care.

Only Clergy Had to Marry “in church”

It was obligatory only in the case of clergy in lower orders – in other words, in the case of those members of the clergy who were permitted to marry. Not only was this marriage liturgy not obligatory for other Christians; it was reserved for those Christians whose conduct was blameless. Until the eleventh century, then, marriage was contracted civilly, although it was accompanied by church ceremonies. When then does marriage become effective?

There is an old aphorism in marriage counselling which gets closer to the heart of both secular and sacramental marriage than does the Code of law. When are two people married? Thirty years later! This comes closer to what couples experience in their marriage; that becoming married; becoming two in one body; becoming sacramental symbol of the great covenant, is a much more continuous activity than simply giving consent in two little words, “I do.”

Problems in our  Sacramental Theology

My views expressed herein are based on the works of Karl Rahner and Edward Schillebeeckx in their view of sacraments and marriage.

I believe that the way forward lies in the cooperation of anthropology and psychology working together with theology towards a new understanding of the nature of what it means to be a human being and how the sacraments, marriage and the beauty of family life complements our journey as a human family.

Pope Francis has correctly commented that the church has had centuries of flexing its legal muscles without strengthening the arm of compassion and mercy.

How are we, as the community of the church, to walk with and support struggling humanity in their daily journey of “I do”?