Its 45 Years for Our Pamela Davids! 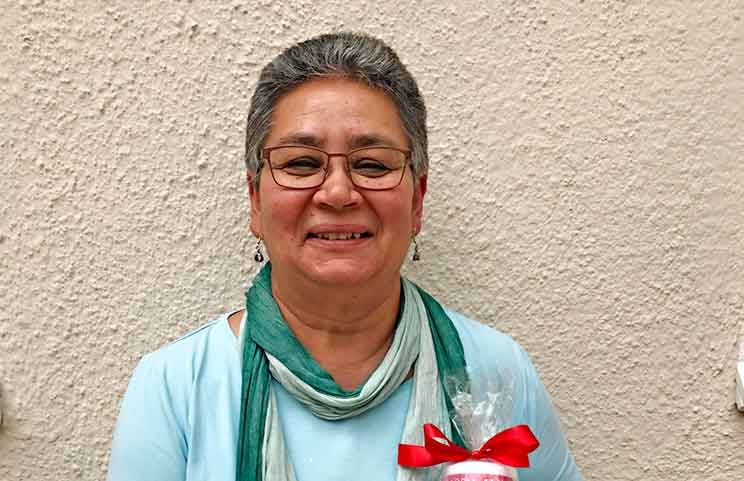 The longest-serving staff member in Southern Cross history — she has overtaken the record of 42 years set by former managing editor the late Gene Donnelly — Ms Davids joined the staff in December 1973.

She has worked with six different editors over the past 45 years, during which time she has taken on a variety of administrative roles, being appointed to her current position in 1995.

Ms Davids was encouraged to apply for a job at The Southern Cross by a friend from the Schoenstatt Family Movement, in which her family was active.

She was interviewed by Jean Pothier, then chairman of the board. Today, Mr Pothier’s granddaughter, Rosanne Shields, chairs the board of directors. Ms Shields’ father, the later Bernard Pothier, also served on the board.

“So I have served The Southern Cross with three generations of the Pothier family,” Ms Davids noted.

When she arrived at the paper as a teenager, a transition was taking place. “Fr Louis Stubbs, who had been the editor since 1948, was in the process of retiring and Fr Donald de Beer was taking over in December 1973,” Ms Davids recalled.

Her first task at the newspaper was in subscriptions, a job that included phoning up readers whose subscriptions were expiring. “That was long before there was e-mail,” Ms Davids said.

After that, she was exposed to a variety of roles in administration, and in the newspaper industry.

The biggest change, she says, has been the technology, in terms of computers, printers and Internet.

“It’s been quite mind-boggling. No more handwritten invoices and statements, no more typewriters, no more carbon paper for duplicate copies,” Ms Davids said. “It’s great that now we can send e-mails and get answers immediately.”

Over her 45 years, she has always enjoyed the working environment.

“Working at The Southern Cross means working with friendly, caring and encouraging people,” she said, adding that “the rules are also not as strict as in the corporate world”.

A Catholic newspaper in every Catholic home

Ms Davids said she wishes “that our bishops and priests would encourage more parishioners to buy a copy of our paper. There used to be a slogan, ‘A Catholic newspaper in every Catholic home’. Imagine our circulation then!”

She also wishes more Catholic business people would be “encouraged to support us by advertising their products or companies. Parishioners would then support those businesses, and their adverts would definitely be supporting us.”

In 2020 The Southern Cross will celebrate its 100th birthday. Ms David is determined to see that centenary, with the newspaper in good health: “Then I can happily retire.’’

More in About us, History of The Southern Cross

Luna Carelse became the first “Southern Cross baby” in more than a decade when she was born in late August...