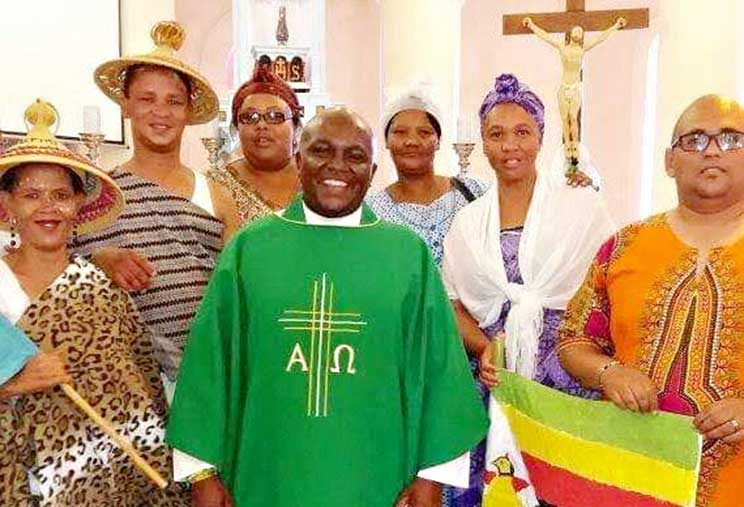 Fr Mzingaye Moyo of Keimoes-Upington with parishioners. Fr Moyo, who served the cathedral parish of Pella, Pofadder and Aggenys, died when his car hit an unmarked stationary lorry.

Father Mzingaye Moyo of Keimoes-Upington diocese died on the evening of October 29 when he crashed into the back of an unmarked stationary lorry 30km outside Pofadder.

Fr Moyo was born on August 8, 1976, at St Paul’s mission in the Lupane district in Zimbabwe and was educated at St Bernard’s High School in Bulawayo.
After completing his philosophical and theological studies at Cedara, he was recommended for the priesthood and opted to join the diocese of Keimoes-Upington as a diocesan priest.

He brought to our diocese the rich experience of his Christian upbringing. The influence of his parents, both teachers, marked his character and work ethic.
Fr Moyo pursued academic studies and was happy with the last exam he wrote for his psychology honours on the day before his fatal accident.

His death the next evening ended a very productive life, leaving a major gap in the ministry of the diocese, since he had been looking after three communities: the cathedral parish in Pella, plus Pofadder and Aggenys.

Fr Moyo was known for his thoroughness. He personally monitored those preparing parents for the baptism of their children and those preparing couples for marriage. He was involved in the formation and direction of parish catechists, and took a keen interest in the youth ministry.

People appreciated that in the cathedral parish, Mass was celebrated every day, even when Fr Moyo also celebrated Mass at one of the other centres. He did not spare himself in his ministry.

In the five years he worked in Pella, he initiated a number of projects for the improvement of the Diocesan Pastoral Centre and the surroundings of “the cathedral in the desert”, with a view to presenting an experience of the local Church to the many tourists who visit each year.

Fr Moyo will be especially remembered for the beautiful grotto which was his first project on arriving at Pella.

We will miss his shy smile and the lively eyes which took in everything and led him to respond sometimes with sharpness and always with insight.
Bishop Edward Risi OMI

Babylon changed things, many things. Like the air that we breathe, these many things are within the collective consciousness of...