Brislin on the Holy Land: The Church Cannot Stay Silent 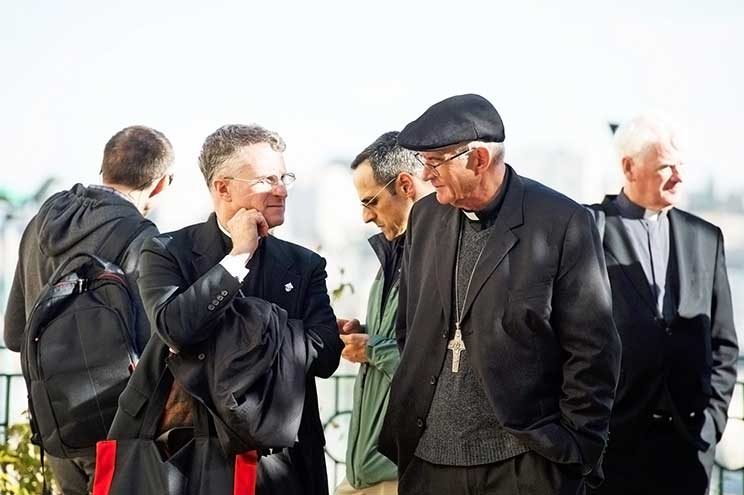 Archbishop Stephen Brislin of Cape Town (right) listens to US Archbishop Timothy Broglio at the Latin Patriarchal Seminary in Beit Jala, West Bank. This year’s solidarity visits of bishops from South Africa, Europe and North America focused on the challenges and opportunities for Christians in Israel. (Photo courtesy Marcin Mazur via catholicnews.org.uk)

Addressing Palestinian Christians in the West Bank town of Zababdeh, Archbishop Stephen Brislin of Cape Town said the Church cannot be silent or neutral in the face of injustice.

Archbishop Brislin and Fr Peter-John Pearson, director of the Catholic Parliamentary Liaison Office, were part of an annual Holy Land Coordination visit of Catholic bishops to Israel and the Palestinian territories, which is intended to foster dialogue and show solidarity with Christians of the region.
In his homily at the church of the Visitation in Zababdeh, Archbishop Brislin told parishioners that the bishops understood the challenges they face and the importance of their presence in the Holy Land.

“We know and understand the difficult circumstances in which you live, and we also understand the important vocation you have of keeping the flame of Christianity alight in the place of the Messiah’s birth, ministry, death and resurrection,” he said.

“The promotion of truth, love, justice and peace are integral to the mission of the Church. In the presence of untruth, injustice, hatred and violence we cannot remain silent. We have an obligation to witness to the kingdom. We cannot be silent, nor can we be neutral,” he said.

Visiting Christian communities in northern Israel and the northern Palestinian territories has helped bishops participating in the Holy Land Coordination see “the great need” to promote an understanding between Israelis and Palestinians, said Bishop Noel Treanor of Down and Connor, Ireland.
He said that a “permanent and sustainable solution is needed”, adding: “It does not make sense that people living in such close proximity should be a source of conflict.”
The annual Holy Land Coordination includes bishops from North America, Europe and South Africa. Based this year in the northern Israeli city of Haifa, it focused on the challenges and opportunities for Christians in Israel.

The bishops visited Christian hospitals, schools and villages in Israel. They also met with Christian religious leaders, Christian mayors from Israeli towns, members of the Israeli Knesset, academics and internal refugees from the Melkite Catholic village of Ikrit.

The diverse meetings have helped highlight the “incomprehensible complexity” of the situation, said Bishop Treanor.
“We have also seen people working for peace and justice and the promotion of mutual understanding. Those are the ingredients for a sustainable solution and hope,” he said.

The bishops also visited the Jenin refugee camp and a school run by the UN Relief and Works Agency for Palestine.
The school has been adversely affected by the US government’s withholding of funds to UNRWA, noted Archbishop Timothy Broglio, chairman of the US Conference of Catholic Bishops’ Committee on International Justice and Peace.

Job promotion is critically important in helping young Christians remain in the Holy Land, he said.

He also noted the importance of meeting with the Christian community in Israel to learn about their perspective.

Archbishop Broglio said that while Christians in Israel—the great majority of whom are Palestinians—have opportunities, they also face challenges and discrimination such as the newly passed Nation State Law, which recognises Israel as “the national home of the Jewish people”. Opponents say the law reduces non-Jews to second-class citizens.

The bishops’ visit also inspires hope in the local Christian community that people abroad care about them and will advocate for them to their governments.—BY Judith Sudilvsky, CNS

Where is the Real Place of the Tranfiguration?
Share