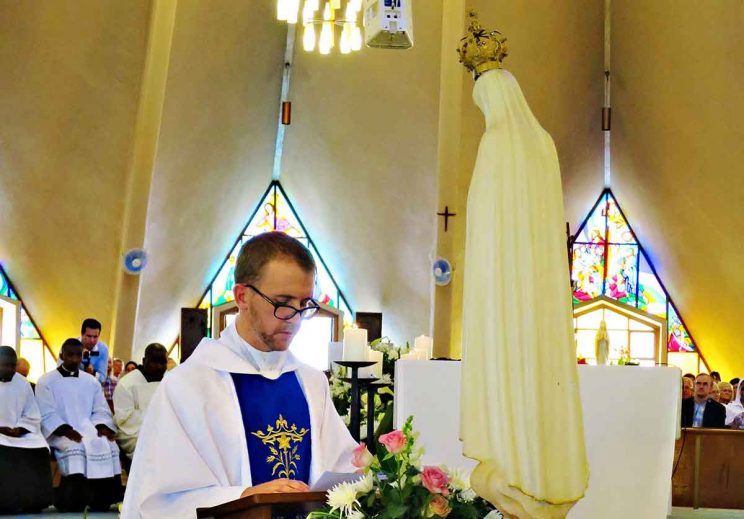 Fr Richard Stonier makes a pledge to Mary during his ordination Mass in St Charles’ church in Victory Park, Johannesburg. Fr Stonier attributes his decision to follow God’s call to the priestly vocation to Our Lady. (Photo: Judy Stockill)

By Lebo WA Majahe – When Fr Richard Stonier was ordained to the priesthood in December, his godfather Fr Ignatius Fidgeon OMI was present.

Fr Stonier was ordained by Bishop Duncan Tsoke, auxiliary bishop of Johannesburg, at St Charles church in Victory Park. Among the congregation were the Stonier family, their relatives and friends.

Bishop Tsoke in his homily called on Fr Stonier to be a good and holy minister, and told him to run to Mary’s shoulder as she has a special love for priests.

Fr Stonier, a former teacher at St Benedict’s, has a deep devotion to Our Lady and the Rosary, and credits Mary with guiding him in his vocation.

In June he spoke on the YouTube channel HM Television about his surprise to discover the presence of Mary in his life, saying that it was “only after I made a consecration to Our Lady that I experienced a real relationship with her…the closeness of a [praying] mother” .

In his thanksgiving note during his ordination Mass, Fr Stonier thanked the Oblates of Mary Immaculate for instilling in him the love to want to serve God and his people from a tender age.

He thanked Fr Jonathan Petersen and the parishes of St John’s in North Riding and St Charles for the love and encouragement he had received as a parishioner in those parishes.

He also thanked the archdiocese of Johannesburg for affording him the opportunity to study in Rome.

What Are Chastity and Celibacy?

Priest’s Long Journey in a Wheelchair

Women who worked in Ireland's “Magdalene laundries” but were denied compensation under the state's Magdalene Restorative Justice programme have won...