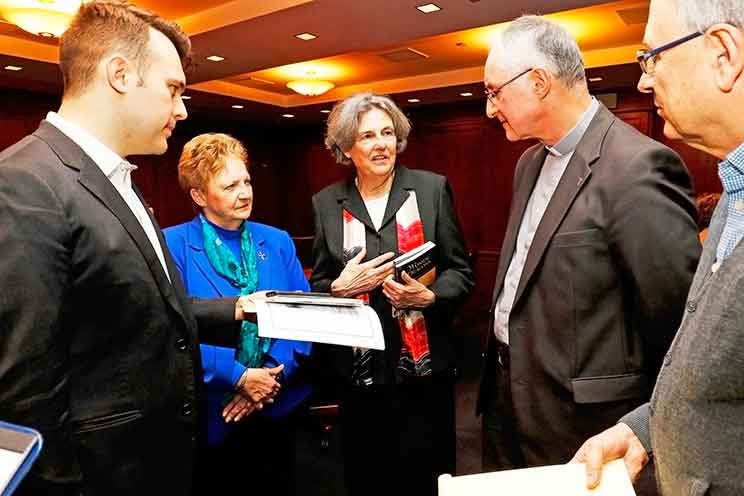 Catholic scholar and author Phyllis Zagano with Sr Donna Ciangio OP and Fr Bernard Pottier SJ as she speaks to journalists at a symposium on the history and future of women deacons in the Church. (Photo: Gregory Shemitz/CNS)

Ordaining women to the permanent diaconate now, when the Church is “crying for ministry”, is a logical way to fulfill its obligation to bring the Gospel to all people, according to panellists at an event at Jesuit-run Fordham University in New York.

There is incontrovertible evidence that women served as deacons in the early Church, they said.

Two speakers at the event on “The Future of Women Deacons” are members of a commission on the diaconate of women established in August 2016 by Pope Francis to review the theology and history of the office of deacon. The group met over a two-year period and submitted its report to the pope in late 2018.

Scholar and writer Phyllis Zagano, a member of the papal commission, said women served as deacons until the 12th century in the Western Church and somewhat longer in the Eastern Church.

“While there is no doubt that women deacons existed, there are differing opinions about the nature of their ordination,” Dr Zagano said. The terms “ordained” and “blessed” were used interchangeably in reference to both deacons and priests, she said.

Dr Zagano’s research included examination of Church manuscripts from the fourth to 16th centuries that are housed in the Vatican Library. She said the liturgical ceremony used by bishops to create women deacons included all the elements of sacramental ordination according to the criteria established by the Council of Trent.

“If a bishop is laying hands on a woman, invoking the Holy Spirit, putting a stole on her, giving the chalice for her to self-communicate and calling her a deacon, I don’t know what else to say,” Dr Zagano said. “As I say to many people, ‘If she wasn’t a deacon, he would call her something else.’”

“Self-communicate” refers to the reception of Holy Communion without the assistance of a minister.

Dr Zagano said men and women deacons performed different duties in different places. Women deacons baptised people and anointed the sick, but men deacons did not, she said. If a woman accused her husband of beating her, a woman deacon examined the bruises and “gave testimony to the bishop, who could render a judgment of nullity. To me, that’s an annulment”, she said.

The diaconate was restored as a permanent sacramental ministry by the Second Vatican Council.

“Many scholars never questioned the received wisdom that women had never been ordained,” said panellist Jesuit Father Bernard Pottier, a member of the papal study commission and a permanent member of the Vatican’s International Theological Commission.

Research has provided “more and more evidence that it was so” and as more scholars and laypeople learn about the new findings, the argument that women were never ordained “is not sustainable anymore”, he said.—By Beth Griffin, CNS