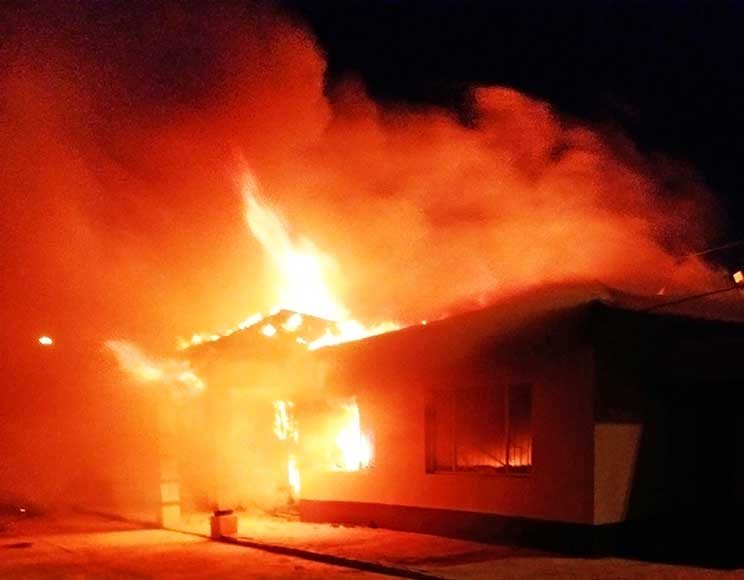 The presbytery at Maria Mamohau church in Orkney, Klerksdorp, caught fire late one night and was destroyed. Parish priest Fr Tšoaeli Adrian Lelimo escaped unscathed but all his possessions were lost.

A fire broke out at the presbytery at Maria Mamohau church in Orkney, Klerksdorp. Parish priest Fr Tšoaeli Adrian Lelimo escaped unscathed and is grateful to God for his grace.

The fire, which completely destroyed the building, took hold late one night.

Fr Lelimo recalls arriving home that evening around 20:00 after having been out all day.

“After retiring to bed for the evening I woke up to screams and rushed to see what was going on.

“When I tried to open my room door I was met with flames and couldn’t get out and instead ran out through the back door and outside. Glass and flames were everywhere.”

The fire department arrived soon after the fire started but unfortunately couldn’t do much to put the fire out as the firefighters’ truck quickly ran out of water.

A second truck arrived with additional water but it was too late, at this point.

The house was completely destroyed, the damage was done, and all they could do was put out the little flames remaining.

Everything in the house was destroyed. Furniture, parish files, Fr Lelimo’s books, liturgical vestments, music instruments, and floor tiles and paint that were meant for the church, which is currently under renovation.

Thankfully his car was not damaged as the garage is not attached to the house.

However, the car keys were in the house and he couldn’t move his vehicle in time; some electric wires were affected, and one window was broken.

Fr Lelimo suspects that the cause of the fire was an electrical fault.

However, detectives and fire experts from Pretoria came to examine the house and the damage, and he is still waiting to hear from them.

“When I escaped the fire that night, all I had was a pair of jeans, one shirt and a pair of sleepers I was wearing, but by lunchtime on Tuesday, I had new shoes, toiletries, and some shirts,” Fr Lelimo said.

“Now my wardrobe at Immaculate Conception parish in Orkney, where I came to seek refuge after the fire, is almost full. “

Fr Lelimo says he does not feel the loss anymore. “I’m grateful to God who has shown me so much love through his people.

“As for the house, it will be built again, even though I do not know how, as the parish is busy with renovating the church.

“I’m only grateful that I got out alive,” said Fr Lelimo.