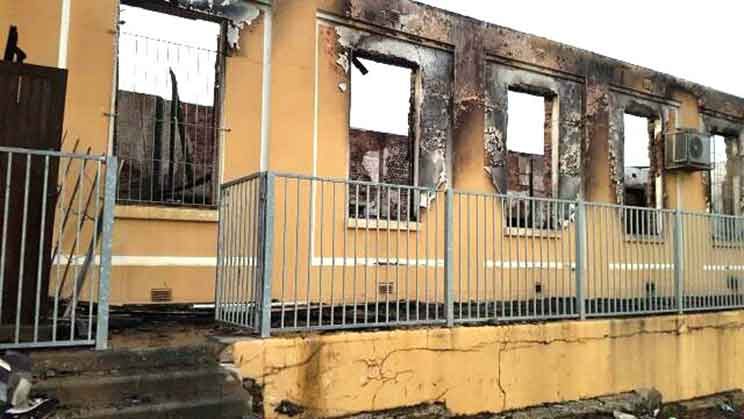 Holy Cross Primary School in District Six, Cape Town, suffered a devastating fire that destroyed three classrooms and other facilities. The school has been offered donations and support from many organisations and individuals.

Holy Cross Primary School in District Six, Cape Town, has been overwhelmed by the outpouring of support from the community and the provincial education department after a devastating fire earlier this month destroyed three classrooms and other facilities.

Structural engineers have been called in to establish security and safety, and everything has been processed to be sent to the insurers.

The fire completely destroyed three classrooms, the feeding scheme kitchen, a computer room, and the Liyabona Library, named in honour of school pupil Liyabona Mbaba, who died in a taxi crash in August.

Religious education coordinator Carlene Leukes was the first to notice the column of smoke rising from the back of the school on her way to a meeting at 13:30. She rushed back into the building and alerted staff.

Within a couple of minutes, the children were safely evacuated and the fire service was dousing the fire.

Staff and children stood on an adjoining piece of land watching in horror as the fire consumed their school.

The biggest issue now is accommodating the learners who lost their classrooms as a result of the fire. Nearby Zonnebloem Primary School was initially considered as alternative premises, but parents and the school felt it important to keep the children together.

The alternative is Scalabrini Hall opposite Holy Cross, which the school has used before.

A donor has come forward offering to erect a fence around the hall in the interim until the rebuild occurs, as safety of the children is the first priority. This is still to be finalised, as the area is a heritage site.

Sr Mary Quimpo, provincial of the Sisters of the Holy Cross, has expressed her deep appreciation for the overwhelming concern and generosity. From far and wide, donations and offers of support have been received. The Western Cape Education Department also arranged trauma counselling for the children and teachers.

The school has received all the food and stationery donations it needs, and is encouraging people to make cash donations to allow the school to cover urgent costs.

The Chris Otto Foundation has started renovations at the school to accommodate a library. Foundation literacy project director Nonikiwe Mashologo said it is determined to continue with the library programme and is looking at running a mobile library.

“The idea with the mobile library is to take the library from class to class during the course of the day and do reading sessions [during library time] with the children, and also give them a chance to take some books home to read. We are hoping to have this system until the Liyabona Library is rebuilt,” she said.

“We are now at the stage where we are waiting for feedback on the rebuilding process and this may take some time as various stakeholders meet to make the final decisions.”

To contribute to the school’s relief fund, contact the Catholic Schools Office at 021 761-8050 or at admin.cso@telkomsa.net