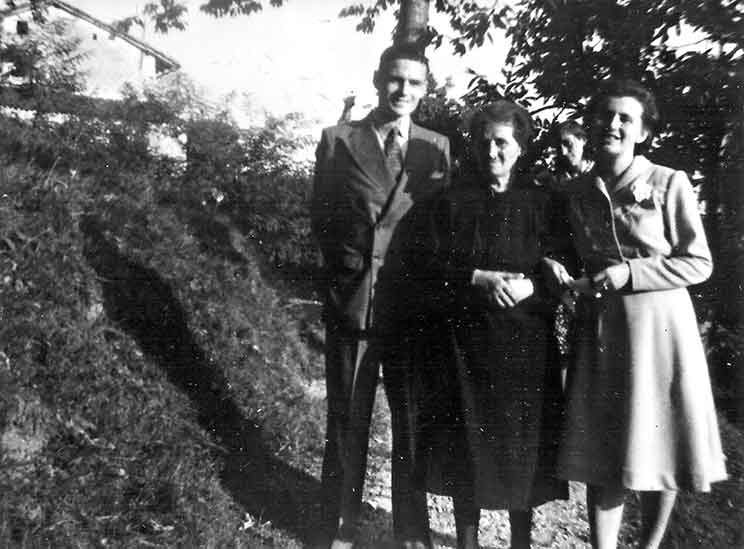 Wedding day in Albenza, Italy: Danny Hyams of Johannesburg married Domitilla Rota—having “seen off” two rivals and via a detour. Domitilla’s mother Elvira is in the middle. The couple remained married for 64 years.

In the 2nd article in his four-part series on the lives of Little Eden founder Domitilla Rota Hyams and her husband Danny,  Daluxolo Moloantoa tells of how three POWs fell for an Italian village girl.

Last week, in part 1,  we left the escaped prisoner of war Danny Hyams of Johannesburg as he was on his way to the northern Italian village of Albenza to see La Signora Elvira Rota about a boil that had grown below his chin.

As Danny knocked on the door of the Rota household, he and his village minder were greeted by a smiling young lady, Elvira’s daughter Domitilla.

She was not put off by the young soldier’s face which was wrapped in a piece of black cloth to hide the boil. The Rota family was not unfamiliar with vagrant, ailing prisoners of war.

Every day for the preceding nine months Domitilla had been taking a pot of warm minestrone soup to a group of fugitive Serbian POWs hiding in the forest below Bergamo. She did that notwithstanding the fact that anyone found harbouring a prisoner of war could be summarily executed by Mussolini’s fascist army.

Danny later recalled: “La Signora Elvira was held in very high esteem by the villagers in Albenza. A true point for all in need, she was a nurse, the village midwife and above all, she was always ready to help anyone who knocked on her door.

“I came to regard her as the greatest woman I’d ever met: courageous, self-sacrificing and deeply Christian.”

After some hair-raising close shaves with Mussolini’s army, the danger of capture diminished. Danny and his close friend, fellow South African soldier Owen Fox, were rescued from their mountain hideout and sheltered in an almost derelict building provided by Elvira.

They soon found themselves visiting the family home—and the Rota girls!—more and more, so much so that they were soon accepted as extended members of the family. The respectful term “La Signora” for Elvira soon turned into the endearment of “Mamma Rota”.

Just before the official end of the war, Domitilla asked Danny and Owen for advice regarding a marriage proposal which she had received from Mirko, one of the Serb POWs.

In the absence of a father or other male figure in the Rota family, Danny and his colleague assumed that the request was made on the basis that they were male, and a bit older than the Serb proposer.

What followed was a twist and unpredictable series of events. Danny later explained: “Counselling had not been part of our military training. We suggested that Domitilla seek advice from Mamma or [her older sisters] Esta or Pia, or from all three.”

Going “home” that night, Danny and Owen were quiet. Suddenly Owen said: “I want to marry Domitilla”. Danny immediately replied: “I think I do too”.

“Were we crazy?” Danny would later ask, rhetorically. “What exactly did we find appealing in this unassuming and young Italian lass with her simple innocence, and a devotion to her daily Mass? Perhaps, like me, Owen suddenly came to the realisation that here was a pearl of great worth.”

The very next day, “We gave Domitilla a hundred reasons why she should not accept Mirko’s proposal.”

Although there was little possibility of the South African pair being recaptured at this late stage, they waited until mid-April, when the Allied Forces crossed into Bergamo, before showing their hand.

Now that they were certain to go home, action was needed. But Owen, who had been the first to state his wish to marry Domitilla, was too shy to proceed.

“I then took Domitilla aside and blurted out, ‘Owen wants to marry you,’” Danny later recalled.

“She freaked out, not expecting such a bombshell. After about ten minutes of protestations of her unworthiness, and myriad other excuses, I said: “And so do I.”

Poor Domitilla was speechless, and rushed off to her bedroom where she remained distraught for a week.

“When Esta finally brought me her sister’s response, I realised I was now engaged. How bizarre! How unromantic. No overwhelming surge of affection or of passion—only admiration. Almost a sense of duty to cherish this precious person—who, as a young girl, had cherished an ideal to become a missionary in Africa,” Danny recalled.

“In hindsight, I realised that I was predestined to be her companion, to enable her and protect her in carrying out this vision.”

On May 8, 1945, the total and unconditional surrender by Germany and its allies became effective, ending the European phase of World War II.

In the last few days ahead of Danny’s repatriation, he and Domitilla paid a visit to the shrine of Our Blessed Lady of Cornibusa, and Domitilla presented Danny with a souvenir ring of the Madonna as a pledge of their betrothal.

On his departure for South Africa, Danny received what he would describe as “the first peck on my cheek”, as he bade farewell to Domitilla and the others who had looked after the escaped prisoners of war.

His departing words to Mamma Elvira were: “I will be back in two years to claim your daughter in marriage.”

In June 1946 Danny wrote to Mamma Rota with the suggestion that Domitilla travel to South Africa and marry him. Not unexpectedly, the formidable Elvira replied: “If she’s worth having, she’s worth coming to fetch.” So Danny waited a little longer until he could afford the return trip to Italy.

In June 1947, after he had written his final exams in accounting, Danny kept his promise and travelled to Italy.

Daniel George Hyams and Domitilla Maria Rota entered the state of holy matrimony on September 7, 1947, at the parish church of San Rocco in the bride’s home village of Albenza.

The wedding was a typical Italian village marriage. It was extra- special for Domitilla as it happened on the feast of the Nativity of the Blessed Virgin Mary.

Next Week: Life in South Africa and the founding of Little Eden.