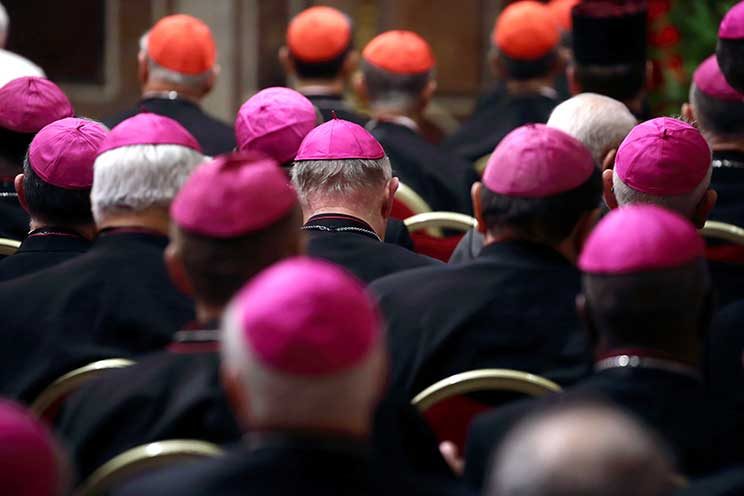 Bishops at a penitential liturgy during the recent Vatican summit on abuse. In his column, Fr Chris Townsend writes that the renewal of the Church can be possible only if all decisions are Christ-centred. (Photo: Evandro Inetti via CNS)

I don’t have much trust in high-level summits. I really don’t think much is done or achieved by calling an SADC summit or even a summit to deal with the sexual abuse crisis in the Church.

I admire Pope Francis greatly for continuing the courageous programme of Pope Benedict XVI in dealing with the sexual abuse crisis, and I revere him for allowing the voices of women and other survivors to be heard. I do think we are in an epoch of change because of this.

But will summits do anything? Not really. There will be hand-wringing, discussion documents and other deliverables. But real change?

Define Problem and Be Willing to Change

Well, to change you need to define the problem and be willing to change.

Anyone who deals with the trauma of sexual or gender-based violence knows that most of these crimes against humanity are crimes of power. Rape, as is so often said, is a crime of power. The crisis of the rape of the Church is a crisis of the role and responsibility of power within the Church.

Before you accuse me of being a Presbyterian (power to the presbyterium; that is, priests) or all in favour of the dissolution of the hierarchy — never. I don’t believe that is the way to go. It doesn’t change the problem of the exercise of power.

I have been a parish priest long enough to know that there is no such thing as a power vacuum — and that some of the worst abuses of power happen when the rightful authority abrogates or abdicates legitimate authority.

So where do we go? First, let’s call this scandal a colossal abdication of responsibility. And then let’s also call it an abdication of truth. Both of these need a carefully considered response, not a knee-jerk reaction.

I have seen some knee-jerk reaction in the attempts to link this terrible problem to homosexual clergy within the Church. But this is not a homosexual problem or even a heterosexual problem.

You see, we are no longer dealing with the issue of the sexual abuse of minors as much as we are dealing with a permissive culture of the exercise of power that forgets where the authority to exercise power comes from.

As Soon as We Forget Christ

As soon as we forget our Christian relationship to Christ — the Head of the Body — we tie our power to a lesser authority, namely that of protecting assets. Avoiding scandal. Protecting the good name of the Church.

Well, there is no more “good name” of the Church. We will need to reboot that idea. As we begin to change the way the world perceives the Church, we can’t be trading on the fact we started so many schools or built hospitals or missions, or whatever. This is the capital of another generation which we have no right to spend.

So we start again. Every Christian. Every Catholic. Every leader. Every clergyman. Every bishop. Every administrator.

We start by renewing a humility in Christ; an honest relationship. Soon we will begin to see that this abuse of power that has killed the good name of and goodwill towards the Church, and which has so severely compromised her mission, has its foul and festering heart in our loss of decision-making that is centred on Christ.

This abuse will continue until we examine all our power relationships. Every decision we make. Every cent we spend. Every blind eye we turn. Every contingent decision made with false prudence to protect the name of a Church, her pastors, her money, her property.

That false prudence is not a relationship with Christ.

So much of what Jesus has done with his Church is done with the same exasperation as his cleansing of the Temple — tossing over the tables of the coin changers and causing a riotous exodus of everyone chasing the animals of sacrifice as they are liberated from the temple precinct.

That ultimately is the biggest abuse. We have left a trail of suffering little ones in order to preserve the name and reputation of the big, bad bully on the block.