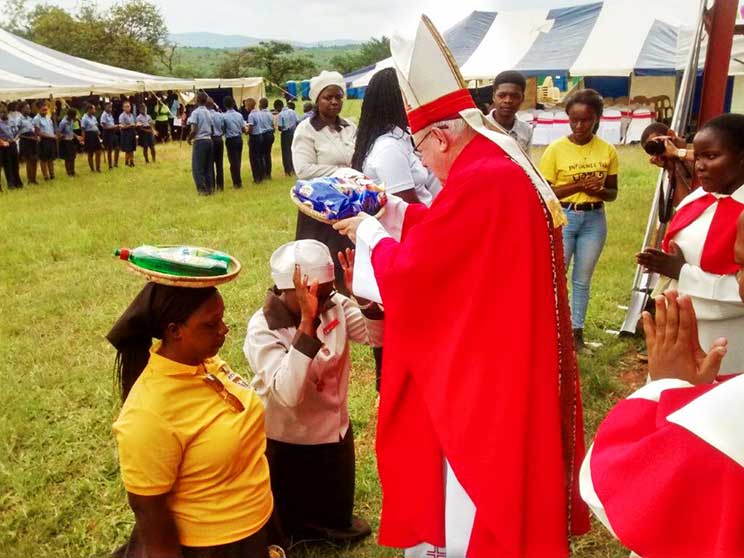 The year to prepare for the 30th anniversary of the martyrdom of Bl Benedict Daswa is now underway, with parishes making pilgrimages to his tomb in the church at ṄNweli in Tzaneen diocese and other places of interest associated with the martyr.

In the runup to the anniversary on February 2, 2020, every parish in Bl Daswa’s home diocese will make such a pilgrimage. Parishes from other parts of South Africa are invited to also make a Bl Benedict Daswa pilgrimage.

Moreover, March 23-24 will see a women’s pilgrimage, followed by a men’s pilgrimage from March 30-21, both led by Fr Sakhi Mofokeng, coordinating secretary of the Council of the Laity of the Southern African Catholic Bishops’ Conference.

The pilgrimages are hosted by Sibasa parish, which also organised the liturgy for this year’s feast day Mass.

To mark the prepatory year, each of the roughly thousand participants at the official celebration of Bl Daswa’s feast day at Tshitanini village on February 1 was given a symbolic pearl, in the form of a bead.

Sr Tshifhiwa Munzhedzi OP, the promoter for the cause of canonisation of Bl Daswa, said the turnout was very good, for a weekday.

“Some pilgrims came from as far as Polokwane, Johannesburg and the Western Cape,” she said.

Archbishop William Slattery of Pretoria, main celebrant and preacher at the feast day Mass, challenged all people to live by the word of God and to be willing to stand up for the faith even in times of trouble and difficulties, as Bl Daswa did.

To organise a Bl Benedict Daswa parish pilgrimage, contact Sr Munzhedzi at bendaswa@mweb.co.za or  Chris Mphaphuli at cmphaphuli6@gmail.com. They will help facilitate the numbers coming to visit.

Music Legends for Our Lady of Lebanon Festival