Fr Chris Townsend: As I Move to a New Parish 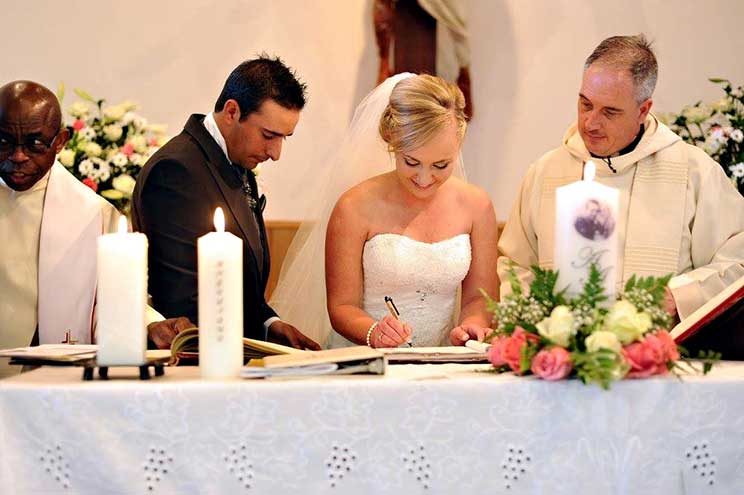 Fr Chris Townsend (right) at one of the weddings he officiated in his old parish, of Anthony and Angelique Fernandez.

Generally, I think most of my priest colleagues dread taking calls from their local ordinary — the fancy term we use for the bishop or superior.

We just don’t like what those calls usually mean. And when that call comes from the archbishop directly, from his car and announcing that he is on the way, the temptation is to reach for “Father’s Little Helpers” in the bottom drawer, even if the call is at 8:30.

You see, I have had one of “those” visits only when someone has written a ten-page (dis)missive to the boss, and you know you’re in trouble…

Well, the Arch spoke about other things — things which make a priest’s anxiety match that of government ministers when the president calls one of his midnight reshuffles. Just as I finished my tea and announced that I needed to go, the archbishop simply said: “Yes, you are going to Zwavelpoort.”

After my stunned silence denoted some form of consent, I asked when and what would happen to my current assignment. And this is where that promise of obedience makes life interesting. I really can’t object to the move and what happens to the current parish becomes not my concern, for the archbishop is the parish priest of all parishes.

Thus the whirlwind has been reaped. It’s a flurry of secrecy with negotiations with successors and incumbents. It’s the discomfort of waiting for the go-ahead to announce a move.

Often moves in a big diocese mean that it’s not just one man who is reassigned, but a number. In our case, the retirement of one senior priest after over 50 years of service meant that at least six of us needed to be shuffled, like a complex game of backgammon.

Then comes the day of announcing. It’s really tough. I think of the many young families that I have watched. Their parents met here. I watched them courting, their beaming engagement, his tears at the wedding (grooms don’t have makeup on and always cry the most!).

I baptised their children and watched them explore their church as this familiar and unfamiliar home. And these are the stories I regret I won’t see growing any further before my eyes.

The announcement is met by tears — some tears of joy, too. Not every person likes the parish priest, and the previous parish priest is always the best one… Well, now I will be that person.

Someone cries out in church “Oh no!”, but you know those who had left the parish are already excitedly WhatsApping each other, planning a triumphal return to a parish they are no longer part of, like the Jews returning to the Holy Land and finding the Samaritans had carried on without the (self) chosen race.

Every new parish has myriad challenges for the new priest. The first is meeting the exiting priest. There is always a threat there as we, like cuckoos or magpies, make our homes in those of others.

In our old parish we have our own followers and supporters and our own stories, and we’ve become a “Father” to this household. We have our own way of doing things and any new person is an invader…

The man on the way in is often treated like a stepfather who comes into the household of another and shifts him out. There is never an easy transition, and as we age, it just gets more difficult.

I hate the thought of packing, of moving, of discovering a new section of the archdiocese. I’ve lived in the same area for over 12 years, so the first thing I did when I was told I’d have to move was to google the nearest shop for single-person food in my new area and the quality of the data signal there.

As I write, I have not moved yet, but in the parish I’m leaving, there has been a generous response from the pastoral and finance committees which are seeing to a smooth transition of leadership, with handover meetings and succession planning.

I must admit that this level of thought has really impressed me and it has taken a lot of the transition stress away from me. My successor already has an e-mail address set up and his diary is being booked. He’s literally hitting the ground running—that’s what we do in these busy big parishes. And he’s up to it.

I will be moving to the east of Pretoria — so far east, I joked, that I would need the archbishop to sponsor a TEFL language course. That went down like a lead balloon.

I walk into a parish with a sizeable debt which is made all the more manageable knowing that isn’t quite as big as Eskom’s.

I have no car, but the property is a big smallholding so I think I may get a tractor. My closest neighbours are a herd of cows, five horses and seven sheep.

But the community I enter into seems excited to receive me. And that makes all the difference.