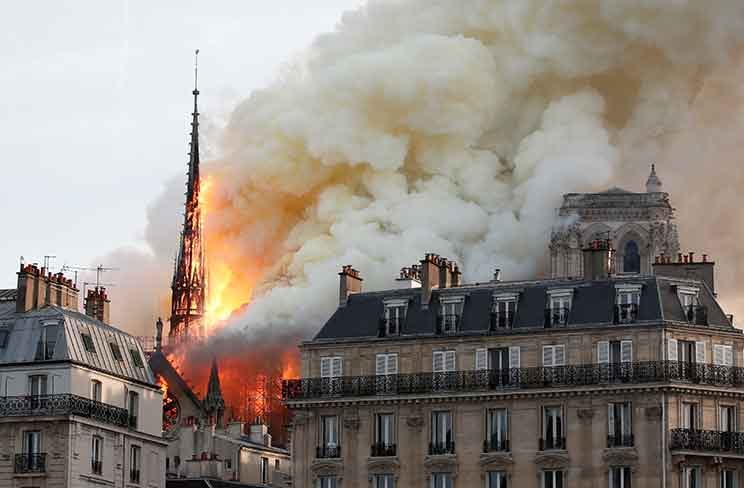 Flames and smoke billow from the Notre Dame Cathedral after a fire broke out in Paris April 15, 2019. Officials said the cause was not clear, but that the fire could be linked to renovation work. (CNS photo/Benoit Tessier, Reuters)

The Catholic Church in Southern Africa has said that now that the fire that threatened to destroy the cathedral of Notre Dame in Paris has been extinguished, “may the faith of the French Catholic Church be vigorously enlivened”.

A statement the Southern African Catholic Bishops’ Conference, signed by spokesman Archbishop William Slattery, expressed “admiration for the firefighters who battled the blaze and saved so much of value”. Some 400 firefighters battled the inferno; one was seriously injured.

The Southern African Church “is deeply saddened by the damage done by the disastrous fire to the cathedral of Notre Dame. We send our sincere sympathies to the French Church and nation on the loss of this great monument of their faith,” the statement said.

“Notre Dame has been a visible reminder of God’s presence at the heart of French society, history and culture for 850 years,” it noted.

“In a particular way we offer our prayers for the archbishop and people of the archdiocese of Paris. We are heartened by the resolve of the president of France [Emmanuel Macron] and his government to restore this great icon of French faith and culture,” the bishops said.

The major blaze engulfed the iconic Notre Dame Cathedral in the evening of April 15, sending pillars of flame and billowing smoke over the centre of the French capital.

The fire erupted about 18:30 local time, apparently in the attic of the cathedral. Authorities said the cause was not certain, but that it could be linked to renovation work that the cathedral was undergoing.

As the sun set over Paris, the fire consumed the upper portion of the cathedral and the main steeple was filled with flames. It eventually collapsed into the church.

At one point, emergency responders entered the cathedral in an attempt to preserve priceless art, statues and relics — including the reputed crown of thorns of Christ’s Passion, and wood and a nail from the Cross — from destruction.

Etienne Loraillère, an editor at France’s KTO Catholic Television, reported that “Fr Fournier, chaplain of the Paris firefighters, went with the firefighters into Notre-Dame cathedral to save the crown of thorns and the Blessed Sacrament.”

Shortly after midnight, firefighters said the main structure had been preserved from collapse.

Archbishop Michel Aupetit of Paris tweeted: “As I speak, it seems that the towers of the facade of Notre-Dame are saved. The whole diocese prayed, and I joined the young people who were praying at Fontaine Saint-Michel [near the cathedral]. Let us remain united more than ever, in Hope.” 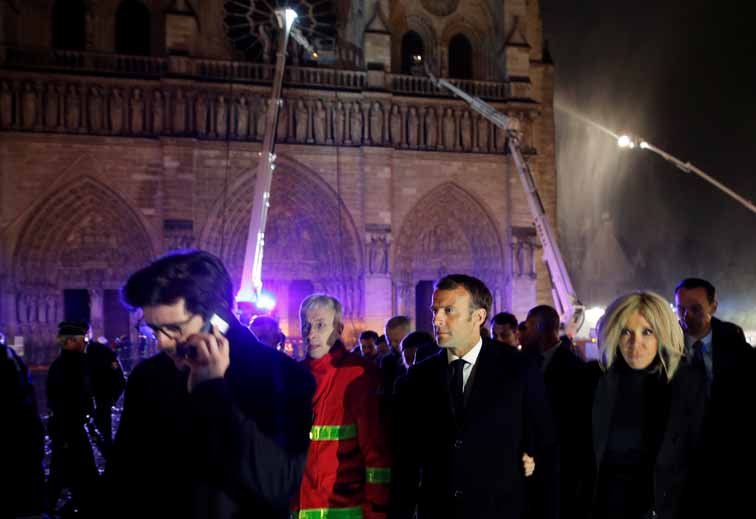 President Emmanuel Macron said that “we will rebuild” the cathedral, and shared his relief that “the worst had been avoided”.

By French law, the cathedral is owned by the state, though the Church pays for its maintenance and staff.

The blaze elicited emotional responses from throughout France as Christians began the observance of Holy Week.

“I had a scream of horror. I was ordained in this cathedral,” Bishop Eric Moulin-Beaufort of Reims, president of the French bishops’ conference, said in reaction to the disaster.

The Vatican issued a statement in the evening saying that it learned “with shock and sadness the news of the terrible fire that has devastated the cathedral of Notre Dame de Paris, symbol of Christianity, in France and in the world”.

“We express our closeness to the French Catholic and to the people of Paris. We pray for the firefighters and for all those who are doing everything possible to face this dramatic situation,” the statement said.

Audrey Azoulay, director general of UNESCO, the United Nation’s cultural agency, said in a tweet that her office “stood at France’s side to save and restore” the cathedral, which was added the organisation’s world heritage list in 1991. She described the cathedral as “a priceless heritage”.

With additional reporting by CNS and CNA. This article replaces an earlier version.