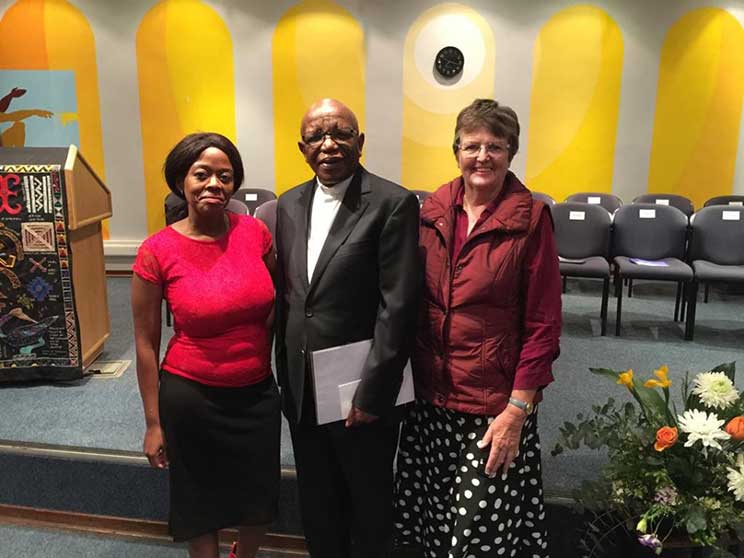 Archbishop Buti Tlhagale OMI of Johannesburg was awarded the Bonum Commune Award by St Augustine College. With him are (left) Lebo Majahe and Judy Stockill, both of the archdiocese’s AD News. Ms Majahe sadly passed away May 25.

Saint Augustine College held its annual graduation ceremony at its Victory Park campus in Johannesburg, and was honoured to confer the Bonum Commune Award on the city’s Archbishop Buti Tlhagale OMI.

Equivalent to an honorary doctorate conferred by state universities, the Bonum Commune recognises those who have made an outstanding contribution to education, the common good and/or St Augustine.

The ceremony was preceded by a Mass concelebrated by Archbishops Jabulani Nxumalo OMI and Tlhagale, Mgr Marc de Muelenaere and eight priests from the archdioceses of Johannesburg and Pretoria.

The graduation was presided over by St Augustine grand chancellor Archbishop Jabulani Nxumalo OMI of Bloemfontein, and commenced with the presentation of the annual report by college president Professor Garth Abraham. This highlighted the important academic research being conducted by staff and the ongoing development of degree and certificate programmes.

St Augustine head of theology Dr Sr Judith Coyle OMI read the citation for Archbishop Tlhagale, emphasising the key contribution he had made to starting the college. It was while then-Fr Tlhagale was serving as secretary general of the Catholic bishops’ conference, in 1995, that he promoted the establishment of what was to become St Augustine College; further, Archbishop Tlhagale was the first grand chancellor from 1999-2011.

Dr Coyle also mentioned his wider service to the Church and society in South Africa. Apart from his role as parish priest, Archbishop Tlhagale has lectured at St Peter’s Seminary and St Joseph’s Scholasticate.

After a stint with the South African Council of Churches, working in its justice and peace department, he was liaison officer and director of the Educational Opportunities Council, working to provide research and study opportunities for disadvantaged South Africans.

He has served as SACBC president (2001-12) and as president of the Interregional Meeting of Bishops of Southern Africa.

The archbishop has been a member of the Roman Congregation for the Divine Worship and the Discipline of Sacraments as well as of the Pontifical Council for Interreligious Dialogue.

He has also been co-chair of South Africa’s National Interfaith Council.

Currently Archbishop Tlhagale is the SACBC liaison bishop for migrants and refugees, a patron of the Community Agency for Social Enquiry, and a non-executive director of Ubuntu-Botho Investments.

He is the author of numerous books and articles, addressing concerns including labour, liberation, inculturation, and education. Archbishop Tlhagale’s most recent publication (2018), Pastoral Letters on Mary and Matters Ancestral, addresses the relationship between Catholic belief and devotion, and African traditional beliefs and practices.

Following the conferral of degrees, all were addressed by Elizabeth Maepe, a member of the St Augustine board of directors.

She stressed the privileged position of new graduates and encouraged them to make a positive contribution to society.