Few politicians have a reputation for holiness, but there are four Italians of that dirty trade for whom sainthood causes are underway. Desmond O’Grady introduces the four politicians of ethics.

What do Luigi Sturzo,  Alcide De Gasperi, Giorgio La Pira and Aldo Moro have in common? They were all Italian Christian Democrat politicians.

But there is another thing they share: they are all being examined for beatification by the Vatican’s Congregation for Saints.

It is a compliment for the Christian Democratic Party because these politicians’ performances in public life will be examined as well as their private behaviour.

However, the party itself ceased existence in 1994—its left-wing allied with former Communists to form the current Democratic Party which governed until this year’s elections.

The quartet being examined for beatification date from the time when politics was considered an exalted vocation. Today’s Catholic politicians in Italy do not seem to have such a vision, which was nourished by Catholic Social Teaching and writers such as Jacques Maritain.

The quartet span the history of the Christian Democratic Party which governed Italy, with various partners and none, for almost 40 years following World War II. However, the party did not have the refreshing experience of a spell in opposition, and eventually, following corruption scandals, fractured.

After Italian forces occupied what remained of the Papal States in 1870, the Vatican, to show its disapproval,  dissuaded Catholics from participation in politics and elections. But this attitude changed following the First World War.

Fr Luigi Sturzo (1871-1959), a Sicilian priest and sociologist often called the “clerical socialist”, founded the Popular Party. It opposed the Fascist government which came to power in 1922.

In 1924, the Vatican persuaded Fr Sturzo to go into voluntary exile which aided completion of the Lateran Pacts with Italy in 1929. These healed the breach between the Church and the state, which paid substantial compensation for the seizure of Church property in the 1870 invasion.

Fr Sturzo lived first in London, then from 1940 in New York, but returned after World War II and was made a life senator.

He was replaced as leader of the Popular Party by Alcide De Gasperi who was to change its name to the Christian Democratic Party.

The foe of fascism

De Gasperi was born in 1881 near Trent, when it was part of the Austro-Hungarian empire.  He became a parliamentarian in Vienna but, with the return of Trent to Italy after the First World War, he entered the Italian parliament.

After a prison sentence from the fascists, he was given refuge in the Vatican, as were others, including non-Catholic politicians.

He worked in the Vatican library. The fascist government asked that, as an act of courtesy, he be dismissed, but Pope Pius XI responded that it would be an act of cowardice, and that he was giving an honest man the bread which the fascists had denied him.

The wartime anti-fascist resistance—which comprised communists, socialists and Catholics —formed a bond which lasted into the first post-war years.  The communists even voted for retention of the Lateran Pacts.

They were expected to win the fiercely contested 1947 elections.  One of the anti-left election posters warned that in the polling booth, “God sees you, Stalin no!”

The Christian Democrats had a surprise victory.  A young Polish seminarian studying in Rome, Karol Wojtlya, was a keen observer of the campaign which showed the communists could be defeated even though they claimed the major role in defeating fascism.

As prime minister, De Gasperi ended collaboration with the leftist parties, although some Christian Democrats wanted it to continue.

He insisted on Italian adherence to the Atlantic Alliance and the European Union project. He introduced reforms and sparked an economic boom.

Moreover, he resisted Pope Pius XII’s encouragement of a Christian Democrat alliance with neo-fascists in a local election.

De Gasperi was known for his austere private life. He died in 1954.

One of those who wrote the post-war Constitution was a brilliant young professor in Roman law, Giorgio La Pira.

Born in 1904 in Sicily, he taught law and lived in Florence, where he had two terms as mayor.

La Pira sided with striking factory workers, successfully. He also organised international conferences on Christian civilisation and peace which brought together diplomats with figures such as the German philosopher Joseph Pieper, the French theologian Jean Daniélou and the novelist François Mauriac.

At these conferences, quicksilver La Pira encouraged reconciliation between Israelis and Palestinians and peace in war-torn Vietnam, which he visited  with the same aim.

He lived in a Dominican community as a member of their Third Order, with the religious name Raimondo. He died at 73 on November 5, 1977.

La Pira and De Gasperi had firm support from an up-and-coming figure in the Vatican Secretariat, Mgr Giovanni Battista Montini, who embraced the ideas of French thinkers such as Jacques Maritain, which were beyond the pale for curial conservatives. 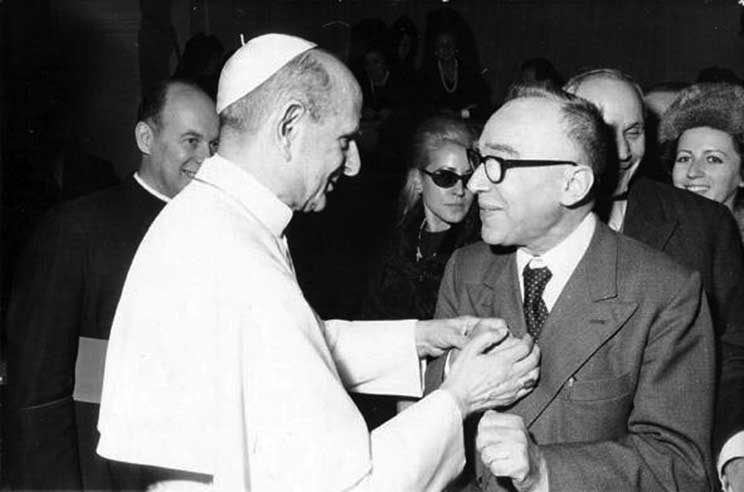 Mgr Montini—the future Pope Paul VI—had been the chaplain of the Catholic University Students’ Federation. One of the students whom he preferred was Aldo Moro, a future Christian Democrat leader and prime minister.

Encouraged by Cardinal Angelo Roncalli, patriarch of Venice and the future Pope John XXIII, the Christian Democrats had accepted an alliance with the socialists, who had abandoned Marxism, by the early 1960s.

But come 1976, the communists, who had broken partially with Moscow, were polling almost as well as the Christian Democrats in that year’s election.

Worried by Italy’s institutional fragility, Moro—the “father of the centre-left” who had been prime minister from 1963-68 and 1974-76—thought it essential for stability that the Christian Democrats bring the communists into the parliamentary majority through an alliance.

Negotiations for the alliance began, which disconcerted many.  Reportedly US secretary of state Henry Kissinger warned Moro that  he would pay dearly for allying with the communists. The negotiations also shocked some communists who believed in the revolution, rather than reformism and compromise.

On March 16, 1978, a terrorist group, the Red Brigades, kidnapped Moro and held him in what they called a “people’s prison”, demanding the release of political prisoners in exchange for his life.

The Communist Party, anxious to distance itself from the extreme leftist terrorists, refused to negotiate as did the Christian Democrats, but the socialists recommended making the exchange and then capturing all the terrorists.

It was high drama for 55 days as almost daily the terrorists released communiqués in time for the  evening television news. Pleading letters arrived from Moro which some argued were false. Now it is  agreed that they were authentic.

Finally Paul VI intervened with a heartbreaking letter to “men of the Red Brigades”, begging “on my knees” for the life of his friend.

Nevertheless, on May 9 the terrorists killed Moro. He was 61.

At his funeral, Paul VI asked why God had not heeded his pleas for this “good, mild and innocent man who was my friend”. Three months later Paul VI died.

The pope was canonised last October. The politicians he supported and formed may be canonised after him.

Pope Francis confirmed Giorgio La Pira’s life of heroic virtue on July 5 this year and named him Venerable. Fr Luigi Sturzo’s sainthood cause was opened in 2002 (and is said to be nearing the point of beatification), Alcide De Gasperi’s in 1993, and Aldo Moro’s in 2012.