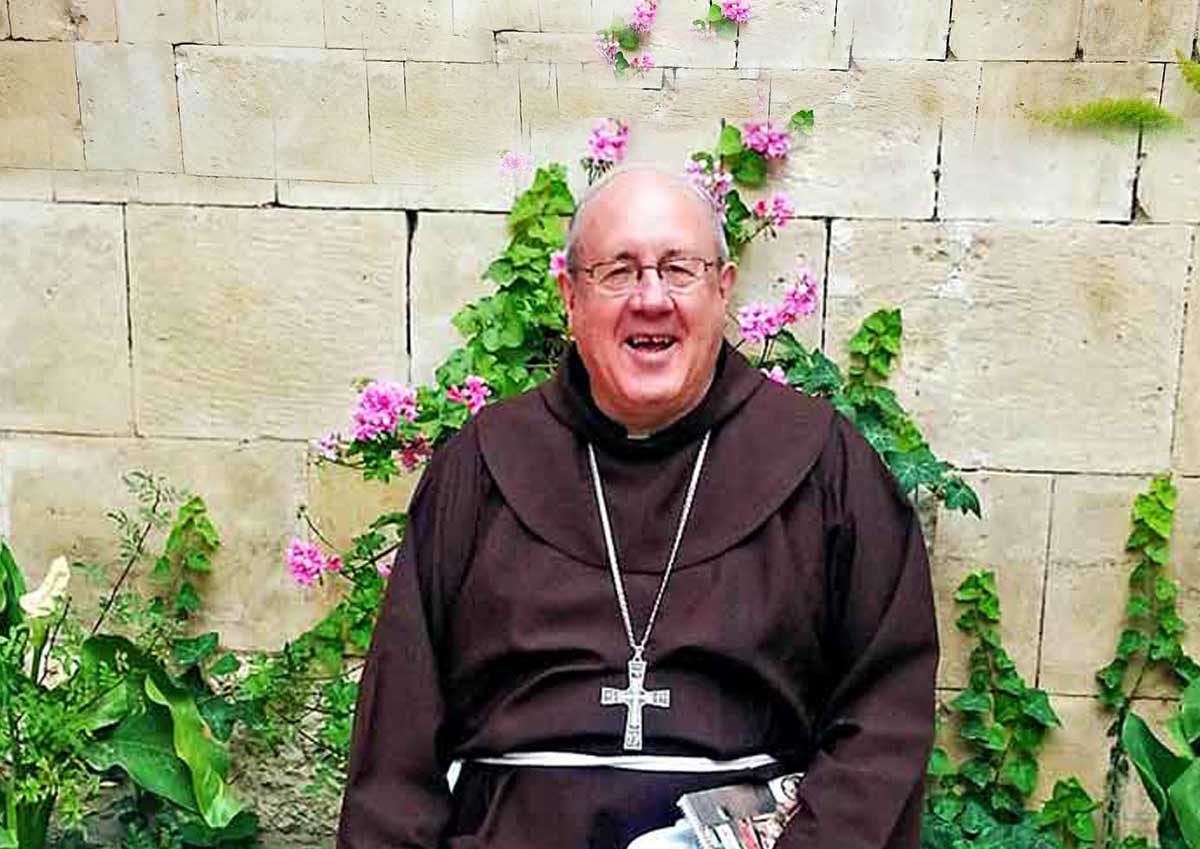 After 25 years as a bishop, Archbishop William Slattery OFM is now retired – but he still has many plans. ERIN CARELSE spoke to him.

Now that he has been succeeded by Archbishop Dabula Mpako as head of Pretoria archdiocese, Archbishop William Slattery will go home to his native Ireland — but only on a holiday.

The Franciscan archbishop, who earlier this year marked 25 years as a bishop — nine of them in Pretoria — will take a little break to spend some time with family and friends in Ireland. But then he will return to South Africa, because, he said, he still has many things to do.

When the young Franciscan friar William Slattery came to South Africa almost 50 years ago — in 1971 — he wanted to share the wonderful friendship he has with Jesus Christ.

Even in retirement, going into the future as a Christian, he’ll continue to do that, he said. This next chapter in his life is just another way to respond to the love that God has for him.

Archbishop Slattery always just wanted to be a missionary. He recalled the day in August 1993 when the apostolic nuncio, Archbishop Ambrose De Paoli, entered his room at the rural mission in the Franciscan novitiate of Besters to tell him that the pope wished to appoint him as bishop of Kokstad.

“I refused and gave the names of other candidates because I had come to South Africa to work as a Franciscan among the poor,” Archbishop Slattery remembered.

“Even more, at that moment South Africa was preparing for the first democratic election, removing the apartheid government. The diocese of Kokstad was 92% African and I felt embarrassed to be appointed there as a white missionary.”

The appointment was made on December 7, 1993; the ordination was on February 19, 1994 — almost two years after their previous shepherd, Bishop (now Cardinal) Wilfrid Napier, was transferred to Durban.

The new bishop of Kokstad

The people of Kokstad, most of whom speak isiXhosa and Sesotho, gave their bishop a wonderful welcome in the 160 churches and communities of the diocese. The Irish bishop spent what he said were 17 wonderful years ministering among them.

“The pastoral ministry which I exercised was based on the pastoral plan, ‘Community Serving Humanity’. It was very successful for a number of years in forming Small Christian Communities and in engaging many Christians in the life and ministry of the Church,” Archbishop Slattery said.

“There was no local vocation in Kokstad in 1994; today almost all the parishes are staffed by local priests. With the excellent help of parishioners we were able to build 30 new churches,” he recalled.

During those years the Southern African Catholic Bishops’ Conference (SACBC) gave him the responsibility of overseeing seminary formation — appropriately since he had been the rector of St John Vianney Seminary in Pretoria from 1985-91.

“This was a difficult task because the struggle for freedom had as its theme ‘Liberation before education’. Which for the formation was difficult, as it left the student distracted.

“We also had a continual struggle with staffing, and very few priests had been trained in formation work in the country.  By forming the students into house groups and putting heavy emphasis on spiritual direction, we managed to offer better formation. Gradually we were able to appoint local South African priests as rectors and professors.” 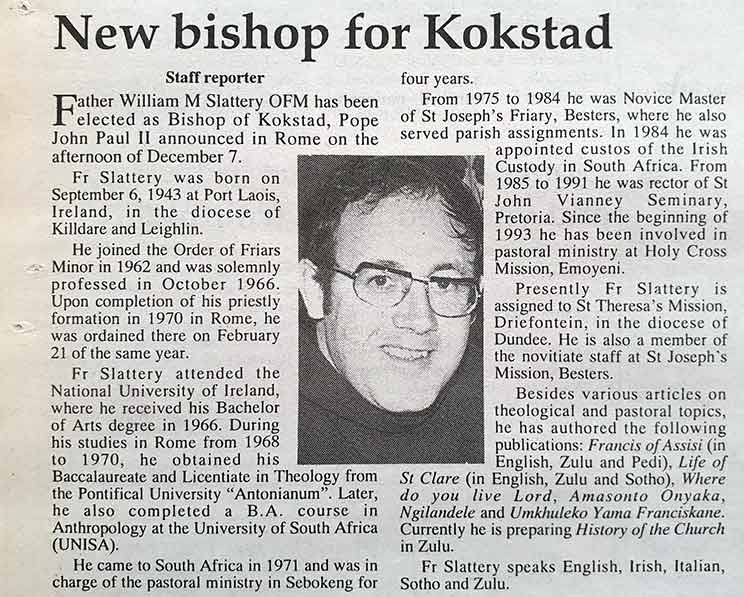 The Southern Cross report announcing the appointment of Fr William Slattery OFM as bishop of Kokstad in December 1993.

After the seminary responsibility, Archbishop Slattery was elected as chair of the SACBC Department of Evangelisation.

“I saw a growth in the Catholic faith of our people during these years, and real efforts were being made in inculturation,” he said.

“A great suffering of the Church in these years was that religious vocations had greatly decreased. This meant that the Catholic presence in education and health care had decreased.”

But there was also an opportunity in the effects of the decline in religious vocations: “It also emphasised the great need in understanding that the baptismal vocation calls all Catholics to build up the Church according to their graces and talents,” the archbishop said.

Another problem he faced was the changing realities of families.

“A particular weakness in our culture is the fragility of marriage and family life. It became obvious in the evangelisation work that while preparatory classes will be given to those getting married, there is negligible support for young married couples,” he said.

“Yes, there are specialised groups, like Marriage Encounter, but very few people actually participate in their meetings,” he noted.

After 16 years in Kokstad, where all the bishops up to then had been  Franciscans, Bishop Slattery was appointed archbishop of Pretoria the day before Christmas Eve 2010.

On January 30, 2011, he was installed as the archdiocese’s fourth archbishop in the city where he had served as rector of St John Vianney Seminary. He was the first Franciscan to hold that office.

Archbishop Slattery has enjoyed working with the many priests there. His attempt was to move them beyond the narrow confines of purely spiritual ministry and become concerned for the whole life-experience of people.

“I have urged them to get closer to the people. Their call is to be more than functionaries and to share the intimate struggles of all,” he said.

“The frustration for a bishop, especially one who has worked in seminary formation, is that while in the seminary one can accompany the students closely, it is much more difficult to accompany and supervise positively priests living alone and in distant parishes,” he said.

With less than 2% of Catholic children attending Catholic schools, catechetical instruction depends on the priest and above all the parents in the parishes.

“We have over a thousand catechetical volunteers, and catechetical teams in all parishes. This places a lot of pressure on the archdiocese to offer adequate formation, motivation, and support to these excellent people,” he explained.

Through the archdiocesan evangelisation department, Archbishop Slattery has insisted on the laity playing a role in pastoral ministries. These include catechetics, youth, marriage desks, Justice & Peace, Caritas and development, Renew Africa, SPREAD, hospital and health ministry, and the prison ministry.

“This archdiocese has well over 20 sodalities. The challenge is to move the sodalities from purely internal concerns towards taking responsibilities for ministries,” he said.

Archbishop Slattery said he had enjoyed many highlights in his episcopal ministry.

Among them, the response of the faithful of Kokstad and Pretoria stand out.

Working with the youth was another highlight.

“I find tremendous generosity in the youth whenever I am with them. Ordaining young men as priests and deacons was also a definite highlight for me. “

The archbishop’s work on Radio Veritas every Thursday will continue in retirement.

“To be able to share with many people through the radio and the response from the people” is fulfilling, said Archbishop Slattery, who is also the serving chair of the bishops’ social communications office.

Archbishop Slattery is a keen reader of The Southern Cross.

“I receive The Southern Cross every week and catch up on the news. This paper does a wonderful job bringing Catholic news to our people, and is a huge element in our very old Catholic identity and has strengthened that over the years,” he said.

“Visiting places like the Holy Land, Rome and Assisi with groups of Catholic pilgrims was always a great joy and a wonderful experience,” he said.

Archbishop Slattery is scheduled to lead the Passion Pilgrimage of The Southern Cross to the Holy Land and Oberammergau in August 2020 (for details go to www.fowlertours.co.za/passion).

Plans for the future

But there is one highlight that ranks above all.

“The response of the Lord to me through his people has been extremely generous. It shows that the nature of God is a God of love,” the archbishop said.

On return after his break in Ireland, he will be working in evangelisation, preaching, teaching and ministering in all of its aspects.

“I have many things to do and have received many invitations,” Archbishop Slattery said.

Asked about the future of the Church moving forward, the archbishop hoped for “a graceful emergence of participation of the laypeople in the life of Christ and the work of the Church”.

“In the past, the Church in South Africa did tremendous work in the schools and clinics, old age homes, and hospices—and that was done then in a large way by religious, especially Sisters and Brothers.

“I think the laity — and I see it in Pretoria — are emerging now and realising that this work, this spirit that you see in what was done in the past, will be continued through them.”

Archbishop Slattery noted that in almost every parish in South Africa there are medical professionals, teachers, lawyers and so on whose skills can be applied to serve the community and the Church.

“My real hope is that the Risen Christ begins to emerge in their lives by the way they reach out and care for South Africa,” he said

“I have great hope. South Africa is suffering at the moment, but I believe in the goodness of the basic South African people and have always found them in the majority to be very good people,” Archbishop Slattery said.

“What I have received from the people of South Africa and our Catholics far outweighs the little service I have offered them. It is a huge grace to have been called to this ministry in this country.”