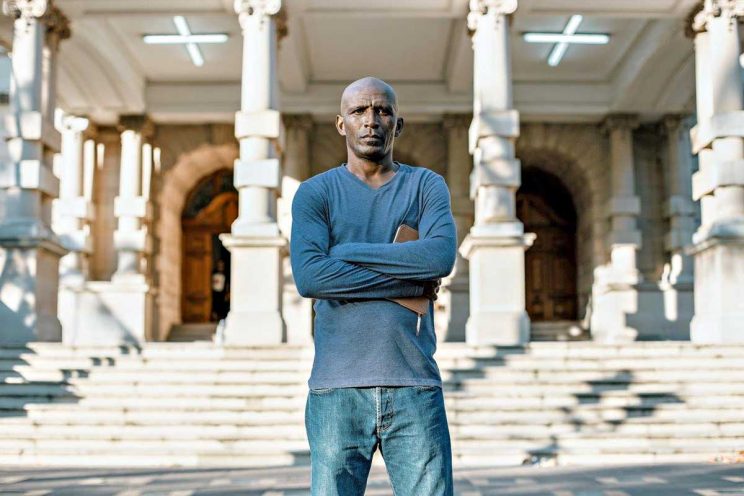 Bongani, a homeless man, is pictured outside Durban’s city hall. His photo and story are part of a social media exhibit which invites people “to look into the eyes of homeless people and get to know their stories”. (Photo: Obakeng Molepe)

The Denis Hurley Centre in Durban recently launched a campaign with the web-based news site Daily Maverick to invite South Africans to look into the eyes of homeless people and get to know their stories.

Our inspiration from this comes straight from the Gospels.

Time and again, the inspiring but unconventional itinerant preacher, Jesus of Nazareth, goes out of his way to engage with people who were marginalised by his society: women, prostitutes, tax-collectors, people with disabilities, foreigners.

He notices them, he stops, he talks to them, he hears their story and they go away transformed. In some cases — but strangely not all — he even calls them out by name: Levi, Zacchaeus, Bartimaeus.

In these encounters Jesus reminds us of a basic tenet of our faith: that we are all made in the image and likeness of God. It is the Judaeo-Christian definition of what it is to be human — regardless of our gender, the colour of our skin, our age, our abilities or disabilities, our nationality, our faith, our sexual behaviour. Each one of us is a manifestation of God-on-earth and so each one deserving of equal respect.

When those around him — including political and religious leaders — have demoted some people to second-class citizens, or do not even see them at all, Jesus reminds his society and the individuals themselves that each of us is made in God’s likeness.

The homeless are just one group in our society who need this transformative Christian touch.

Indeed, a few are perpetrators, and many more are victims. But that is only part of the story. Those of us around the country who work with the homeless know a different kind of narrative.

We encounter women and men who — despite all they have suffered — are not victims but agents. They are people who are able to transform their lives and transform the lives of others.

To begin with that, they might need some help which they receive from faith-based organisations, NGOs, ordinary citizens and occasionally government officials. But we only provide the catalyst — these men and women do the hard work for themselves.

The Denis Hurley Centre (which — full disclosure — I serve as its director) created a photo-essay to introduce you to some of these characters so you can look into the face of the homeless of South Africa.

There are maybe 10000-plus homeless in each of our major cities, not forgetting those in smaller towns. Each of them has a face, and a name, and a story.

These are not the hooded shadowy figures that usually illustrate stories of homelessness. These are not the blurred-out faces we sometimes see in exposé videos. They are not the “invisible men” we drive past at robots whose gaze we try to avoid as they beg for our help.

We hope that people (with homes) will look into these eyes of these people (without homes). Let them open their souls to you.

An inspiring young Johannesburg photographer, Obakeng Molepe, and an insightful copywriter, Sithembiso Shoba, have collected these words and images from the streets of Durban. But I know, from the meetings of the national network of Street Homeless Organisations, that similar stories are repeated across the country.

We invite readers to enter into their world and their words and be moved by what you see and read.

It is too easy to dismiss the homeless—they are seen as litter to be cleansed from our streets, “paras” to be dealt with by the authorities, beggars who should be satisfied with the coins we toss, druggies to be pitied or cursed.

This photo essay does not ask for your pity; it asks for your attention and your understanding.

Homeless 101 is a project in which we are inviting people to stop and learn about this social issue. The number “101” commonly describes the starting point for learning.

The idea of Homeless 101 also connects with Nelson Mandela’s 101st birthday this year, and reminds us of the larger social challenge we face in South Africa. Are we willing to follow Madiba’s example and step beyond ourselves and our social bubbles to encounter each person as a brother or sister, no matter how different they initially seem?

When that happens both parties are transformed. For example, like many organisations, we have tried to help homeless people at robots to switch from begging to selling newspapers. I was presenting once with Lindani, one of our vendors, and he explained his experience:

“I don’t make any more money now than before when I was begging,” he admitted (a disappointment to the development professional I aspire to be!). “But the difference now is how people treat me and how I see myself.”

Before, when he was begging, he had to remove himself from his body and be as pitiful and pathetic as he could. Drivers would zoom past him, trying not to catch his eye, checking their windows were up and hoping the lights would stay green.

Now, he sees the same drivers hope the lights turn red. They wind down their windows, greet him by his name (he wears a badge and has a profile on our Facebook page) and they ask him how his day is going.

“And even if they do not buy a paper,” he said, “they have made my day — because they have recognised me as a human being.”

We hope you will enjoy getting to know these human stories — homeless they may be, but humans first and foremost.

The stories can be read at www.denishurleycentre.org/page/homeless101 or on our Facebook page.