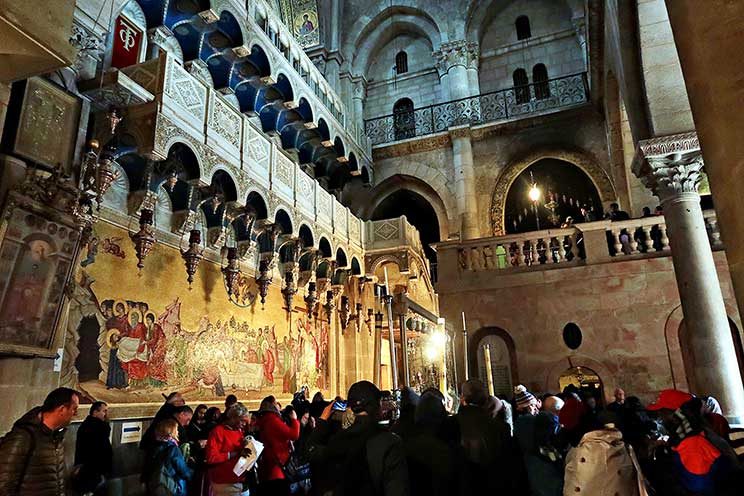 Pilgrims at the stone of unction on the ground floor of the church of the Holy Sepulchre. Above it is the site of the crucifixion of Christ. (Photos: Günther Simmermacher)

For the September 14 feast of the Exaltation of the Cross, Günther Simmermacher looks at the history of the True Cross, which was recovered in 326 AD.

When the Church celebrates the feast of the Triumph (or Exaltation) of the Cross on September 14, it remembers the recovery of the True Cross of Christ in Jerusalem in the year 326 AD.

It is a special day especially for churches which have a relic of the reputed True Cross. Some of them are famous — Notre-Dame in Paris, Santa Croce in Rome, the cathedrals of Pisa and Florence, the monastery of Santo Toribio de Liébana in Spain, Koutloumousiou monastery on Mount Athos and so on — and many others are parish churches.

And don’t believe the (admittedly amusing) quip that if you put all the reputed pieces of the cross together, you’d have a forest. The known relics of the True Cross would yield no more than a branch.

Complicating matters, some claimed relics of the True Cross are medieval forgeries.

In 325 AD, Church leaders from around the Christian world came together for the First Council of Nicaea (present-day Turkey), to settle matters of theology, particularly the Arian heresy.

Attending the meeting were the Roman Emperor Constantine, who 12 years earlier had legalised Christianity and strongly sympathised with it, and the bishop of Jerusalem, St Macarius.

Macarius approached Constantine with a view to get permission to tear down a temple which Emperor Hadrian had built almost two centuries earlier over Golgotha, the site of Christ’s crucifixion and resurrection. The bishop’s hope was to build a chapel there.

Here we must remember that Christians had no churches as we know them before the religion’s legalisation in 313 AD. Mass was celebrated in residences — house churches — which sometimes were clandestinely converted into places of worship. So Macarius’ request was quite ambitious, more so since Constantine, for all his Christian sentiments, had not disavowed pagan worship.

Constantine gave permission for the temple to be torn down and the tomb to be excavated.

Back in Jerusalem, Macarius set to work. The Roman temple was dismantled. Luckily, the Romans had built it on a platform with retaining walls, filling the hollow beneath with soil and debris. Once the debris was removed, Team Macarius found the area pretty much as Hadrian had left it 200 years earlier.

The Christians had always known where the cross once stood. So when the Romans placed a statue of the goddess of love, Aphrodite (or Venus), on that spot, it scandalised the local Christians down the generations.

The tomb of Christ’s burial and resurrection was identified as well, most probably thanks to devotional inscriptions left there by early Christians (as they did at other holy places, such as Peter’s house in Capernaum).

Constantine was informed of the discoveries and he responded by sending his mother St Helena, who had converted to Christianity even before its toleration, to the Holy Land.

When she arrived, everything was set for construction to begin — and not only at Golgotha but also in other places, such as the church of the Nativity in Bethlehem; another site signposted by the Romans with a temple.

Our image of Helena might be that of an ethereally pious pilgrim, possessed of intrepid archaeological genius and a virtuous humility befitting the Mother of Christian Europe.

Helena’s character might well have embraced all these commendable qualities, but she was also a ruthless dynasty-builder who by shrewd political manoeuvres helped ensure that her son would become emperor.

And just a year or so before her pilgrimage, she was involved in a chain of intrigue that led to the murder of her daughter-in-law Fausta, Constantine’s wife. It’s safe to say that Helena’s sanctity was not entirely stainless.

The pious stories of Helena sleuthing the Holy Land for the authentic sites relating to Christ are exaggerated, as if the descendants of the first Christians in Jerusalem really needed a pilgrim from Rome telling them what they had known for generations. 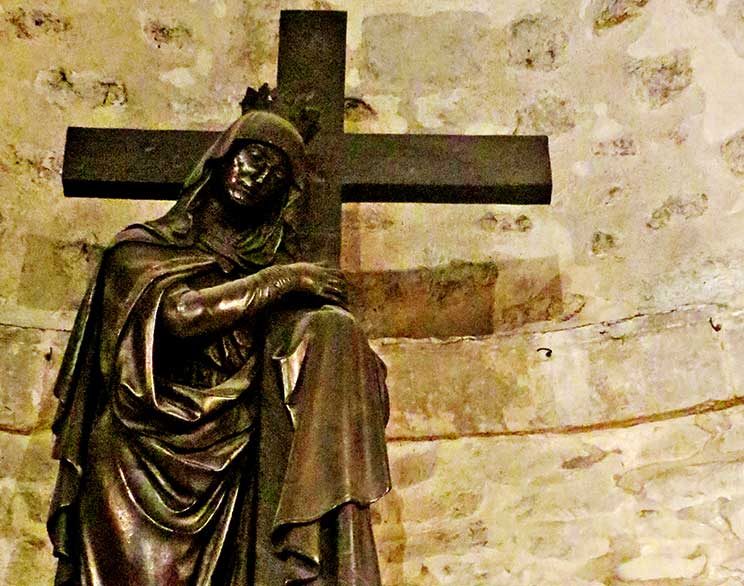 A depiction of St Helena in the chapel of the Finding of the Cross in the church of the Holy Sepulchre. The chapel marks the place where the three crosses were found in a cistern in 326 AD.

Helena had a keen interest in relics relating to the crucifixion, some of which she took home to Rome with her, such as parts of the reputed INRI inscription, the Titulus Crucis, which is now kept in the Santa Croce church in Rome’s Gerusalemme district.

She also took the reputed nails of the cross. According to her contemporary St Ambrose, the famous bishop of Milan, she sent two of them to her son the emperor, who fixed one of them to his helmet and the other to his horse’s bridle.

One of these reputed nails of the cross is now in Rome’s Santa Croce church, another in the Duomo in Milan, and a third in an iron crown kept in the cathedral of Monza.

On May 3, 327, Helena, or those who did the digging for her, found these items with three crosses and the crown of thorns in a disused cistern, what is now the chapel of the Finding of the Cross, the lowest point in the church of the Holy Sepulchre.

A test was required to determine which one of the three crosses was the genuine instrument of Christ’s crucifixion.

For the investigation, a noble woman of ailing health was brought forth. When the first cross touched her, nothing happened. The second cross, nothing. But when the third cross touched her, she was spontaneously healed of her illness. And thus the supposed True Cross was identified.

By the time the church of the Holy Sepulchre was dedicated, on September 14, 335 (hence the date of the feast of the Triumph of the Cross), Helena was long gone.

Before she left, she divided the Cross into three equal parts: a third remained in Jerusalem; another portion went to Rome; the third was taken to Constantinople.

The Jerusalem part of the cross remained in the custody of the bishop of Jerusalem (soon upgraded to patriarch), and was naturally regarded as the Church’s greatest treasure.

The pilgrim Egeria described a Good Friday service in the church of the Holy Sepulchre in around 381.

“The silver-gilt casket, which contains the holy wood of the Cross, is set before [the bishop], opened. The holy wood and the inscription are taken out and placed on the table.

“The deacons who stand around it guard it while all the people, both faithful and catechumens, come one by one, bow before the table, touch the cross and the inscription, first with their foreheads, then with their eyes; and, after kissing the cross, they move on,” the pilgrim reported more than 1600 years ago.

“And because someone is said to have bitten off and stolen a portion of the sacred wood, it is thus guarded by the deacons standing around, in case anyone approaching should venture to do so again,” Egeria wrote.

The Cross was first lost in the sack of Jerusalem in 614, when the Persian King Chosroas II took it as part of his loot. When Persia was defeated by the Emperor Heraclius in 629, the Cross was returned to Jerusalem.

According to tradition, Heraclius wished to carry the returned Cross personally to the church of the Holy Sepulchre: on September 14, the anniversary of the church’s dedication. But before he could even move the cross, the story has it, he had to remove his royal garments and don the cloth of the repentant sinner instead.

Loss of the True Cross

The magnificent church of the Holy Sepulchre survived not only the Persian sack but also fires and natural disasters for centuries — until it was razed by the mad caliph Al-Hakim in 1009.

The Christians had seen the dark clouds gathering, and hid the Cross before the church was destroyed.

The Crusaders rebuilt it in the early 1100s. The church of the Holy Sepulchre, with the shrine of the crucifixion and the tomb of the Resurrection, still stands today, almost 900 years later.

With the arrival of the Crusaders, the Cross was retrieved from its hiding place, and the faithful could venerate it again on special days.

It was lost for good on July 4, 1187, when the bishop of Acre carried it as the army standard into the Crusaders’ decisive battle with Saladin at the Horns of Hattin.

The Saracens defeated the Crusaders. The bishop was among the dead, and the cross was taken, reportedly attached upside down on a lance, and sent to Damascus, never to be seen again.

Günther Simmermacher is the author of The Holy Land Trek.