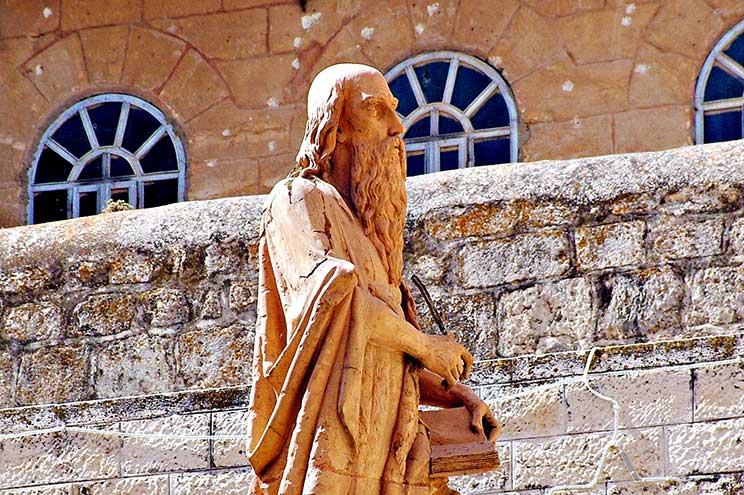 St Jerome, outside the church of the Nativity in Bethlehem beneath which he translated the Bible. (Photo: Schalk Visser)

I  write this late in the evening on the feast of St Jerome. I’m a little exhausted, having just arrived from Johannesburg, after a rather hectic weekend of endless book discussions on Live Literature at the Market Theatre.

It is not lost on me that during one of St Jerome’s many travels, upon reaching Antioch in 374, fatigued by travel and by inner conflict, he rested as a guest of the priest Evagrius of Antioch. It is believed he may have composed his earliest known work, De septies percussa (“Concerning Seven Beatings”), there.

But my interest is more on the celebrated dream he had there, in mid-Lent of 375, during his near-fatal illness. St Jerome dreamt he was dragged before a tribunal of the Lord, and accused of being a Ciceronian (a follower of the 1st-century BC Roman philosopher Marcus Tullius Cicero), rather than a Christian. Having been severely lashed, St Jerome vowed never again to read or possess pagan literature, a vow he later disavowed.

Nobody can dispute his passion for Scriptures — he translated it into Latin while living in a cave in Bethlehem—but he also loved classics and rhetoric. It’s a love I caught from him and St Augustine.

Because in Jerome’s time the Church was young, the conflicting lines between paganism and Christianity were still being sharply drawn, and this brought spiritual conflict within him.

But Scripture, in its narrative, rests on the shoulders of classical literature, especially the Vulgate, which St Jerome masterly produced.

St Augustine, in The City of God, paid homage to classical literature even as he attempted to drag it into the transcendental realm.

This irony was not lost on me, as a lover of literature, and classics in particular, when I skipped Mass to attend the literature events in Johannesburg. My consolation is that I attend daily Mass whenever I’m able to, though I do feel something amiss when I don’t go to the weekend Mass.

At times it feels like my life is compartmentalised. I’ve to disregard my religious friends in order to attend to the literary ones, and vice versa. And I have to leave my secular friends to go to Mass.

It doesn’t really present any spiritual conflict in me. The funny thing is that my secular friends seem to be okay with my vacillations too, but I often notice signs of concerns from my religious friends.

When we organised a discussion on my novel The Broken River Tent with my parish folks, some seemed to confuse my harsh stance against Christendom—the misuse of religion to propagate and promote imperialistic/colonial precepts with white supremacist tendencies—as being anti-Christian.

Christendom, of course, can be a weapon of power and subjugation, but it can also be the result of naïve zeal, or lack of proper inculturation, as seen mostly in early missionaries.

The life and times of Ntsikana falls closely within this phenomenon of the love of art, song and literature seemingly clashing with religion.

Ntsikana was born into the Ngqika tribe, a son of Gaba. As one of the chief’s shepherds he frequented the Ngqika’s royal house. The Dutchman Nyengane (Theodorus van de Kemp, of whom I have written before) had just arrived in 1799 to evangelise among the amaNgqika.

Ntsikana frequented his prayer meetings. When Nyengane left the amaNgqika, Ntsikana was about 16, and he continued with his Xhosa life, going to traditional dances and all. But the seed of the Word of God had successfully been planted in his heart, and so a few years later he had a Damascene conversion.

Today Ntsikana is regarded as the connecting link between the Xhosa irreligious era and that of Light. He played a crucial role in spreading the Gospel among the Xhosa, and is known as the one who actually brought forth Xhosa Christianity.

He loved composing songs, and was, perhaps, the greatest Xhosa hymn writer.

Zisani Tiyo Soga, the first ordained Xhosa, admitted that they were able to attract the amaXhosa to religion and church only through the use of songs, based on Ntsikana’s style, which became the prototype of all Xhosa worship songs — in the manner of King David establishing the psalmist tradition.

The missionaries following Nyengane wanted the amaXhosa to do away with most of their traditions, including songs, dancing and ulwaluko (circumcision), saying they were heathen practices.

Ntsikana refused to change these traditions. He claimed that Usifuba sibanzi — “The Broad-chested One”, the popular term for Christ then — didn’t shun his circumcised, dancing and singing self when he appeared to him in a vision.

The respect for native culture is the reason why Nyengane and Ngcongolo (James Read, the companion and successor of Nyengane in 1811) were much more successful proselytisers than the rest of the missionaries. They had a pleasing assimilating style to the Xhosa, and they didn’t compromise the Gospel values either.

When Gospel evangelisation does not follow and refine artistic and cultural expression, it loses effect. Poor preaching is also born of such.