From the Margins to the Centre 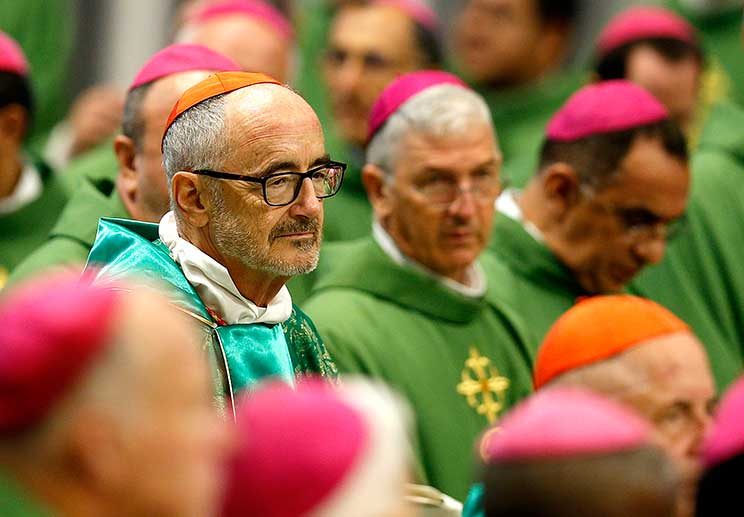 Cardinal Michael Czerny arrives for the opening Mass of the Synod of Bishops for the Amazon in St Peter’s basilica. (Photo: Paul Haring/CNS)

The sight of people from the Amazon with traditional clothes and instruments participating in a Mass in one of Rome’s grand baroque churches will be one of the defining images of this papacy.

When he was elected, Pope Francis joked with the crowd that the diocese of Rome had to go to the ends of the earth to find a bishop. At the synod for the Amazon, he was joined in Rome not just by other South American bishops but also by ordinary people “from the ends of the earth”.

The Church has been listening to these marginalised voices and thus challenges politicians and big business to do the same.

It made for a good photo opportunity but, as always with Francis, this was much more than just a media stunt. It was a visible reminder to the universal Church centred in Rome what being “Catholic” looks and feels like.

When I attended the canonisation of St Oscar Romero and others last year, I commented that the range of faces you see in Rome is a reminder of universalism. But the missed opportunity is that below those faces of many colours, all the men and women are dressed more or less in the same interchangeable clerical or religious clothes.

This is held up as a sign of universal consistency, but it is, in fact, simply the leftovers of a 19th century European style of dress.

For Pope Francis—and this is his challenge to us—a universal Church is not one that conforms everything to one norm but rather one that celebrates the whole of humanity.

The College of Cardinals—his primary group of counsellors and the men who will in time elect his successor—should therefore reflect this diversity.

So European and US cities that took for granted that their bishop would be made a “Prince of the Church” have been antagonised as Francis has gone out instead to peripheral places. He has, for example, appointed cardinals for the first time ever from 17 countries including Pakistan, Madagascar and Mali.

Pope Francis is reaching out not only to the geographic margins of the Church but also to the social margins. He has not yet appointed a homeless man as cardinal (though odder things have happened in Church history!) but he has come close.

Newark on the US East Coast, long overshadowed by its brash neighbour New York, now has a cardinal of its own: the Redemptorist Joseph Tobin was chosen, I suspect, because of his proven commitment to giving prominence to the issues of women, refugees and LGBT people in the Church.

And Michael Czerny, a hard-working and inspiring Jesuit priest—not even a minor bishop—found himself receiving a red hat in the recent consistory: so the people he has spent his life serving (people with Aids, refugees and migrants) now have a voice at the top table.

I had worked with then-Fr Michael in East Africa. When I met up with him in Rome last year for coffee he already had a very grand Vatican job—yet he was still so humble and grounded.

We have been blessed in South Africa also to have pastors who are not afraid to “smell like the sheep” (to use a Francis phrase). At the Denis Hurley Centre in Durban, which I serve as its director, we know that when we work with the homeless and with refugees, we do no more than continue in the pattern of our late archbishop.

His successor has shown the same qualities by taking a personal interest in the fate of street drug-users and allowing us to create the Napier Centre for Healing as his legacy project.

Religious leaders can fall into the same trap as their political counterparts and stop listening to the voices of the poor when they ascend to high office. But that is exactly the moment when they most need to listen—to ensure that those at the margins are invited to the centre; that the voiceless can have a voice.

Pope Francis clearly has an agenda beyond the sound bites and the selfies. He wants to bring the margins into the centre, in such a way that they become the new centre.

And if that sounds familiar, it is because that was also the agenda of Jesus the humble carpenter.

It is hard to see how any future pope could dress in ermine, or live in palatial apartments, or celebrate Maundy Thursday by washing the feet of hand-picked male altar servers in lace robes. Pope Francis’ actions are appropriately revolutionary—they turn around the perspective we had and force us to see things differently.

Inevitably there are many who do not like this. If the marginalised are now at the centre, they might use their voices to demand changes from those who thought they held the power.

Of course, in the Church you cannot say that you are against the poor, so the criticisms are more subtle: “It is not what he does but how he does it”; “He shouldn’t move so fast”; “It’s overturning important traditions”; “It makes us question things we should not question”; “That’s not what he really meant”.

Some are openly hostile to the pope; others instead attack those engaged in this ministry. So my other name-drop is that I had coffee recently with another hard-working and inspiring Jesuit priest, Fr James Martin.

I first met Fr Jim 20 years ago when I was exploring a Jesuit vocation and we were connected by our common experience of corporate life in New York.

Fr Jim has been in the news because he has been challenging Catholics—priests, bishops and parishes— to ask themselves hard questions about how we minister to this marginalised group in our midst. His humble suggestion—and the title of one of his books—is that we need to be “Building Bridges”. To do this he has brought some highly marginalised voices into the ecclesial room: not just gay and lesbian but transgendered and queer as well.

I was saddened when he told me of some of the deeply personal attacks that have been directed at him, usually from within the Church. I am reluctant to compare all attacks to “lynching”, but it struck me that Twitter has some similarities with how this heinous crime was allowed to perpetuate.

The Tweeter rejects the measured approaches of a judicial system or a counter-argument, and instead directs their hatred to a specific person; they do so in a way that is designed to stir up others to join in, and then they wash their hands of the consequences.

US President Donald Trump has set the lowest of standards in his use of Twitter; people who should know better have been too eager to follow his example including those who should be our models of Christian leadership.

But Fr Jim has also received recognition of his work from Pope Francis himself. After all, this pope knows personally that those who fight for people on the margins will themselves be attacked.

Fr Jim shared with me the consolation of being invited recently for a 30-minute private audience with the pope who was “attentive, welcoming and warm” as he listened to him explain first-hand about this ministry.

The Synod for the Amazon and other controversial initiatives of Pope Francis have shown that “you can’t make an omelette without breaking eggs”. This should not put us off but rather give us strength for the mission.

Pope Francis’ leadership can be an inspiration and a challenge to us in our parishes to look at how we can reach out to those at the margins, knowing that it is not always easy.

In our Christian mission to comfort the afflicted, we should know that we are also likely to afflict the comforts of others and of ourselves.