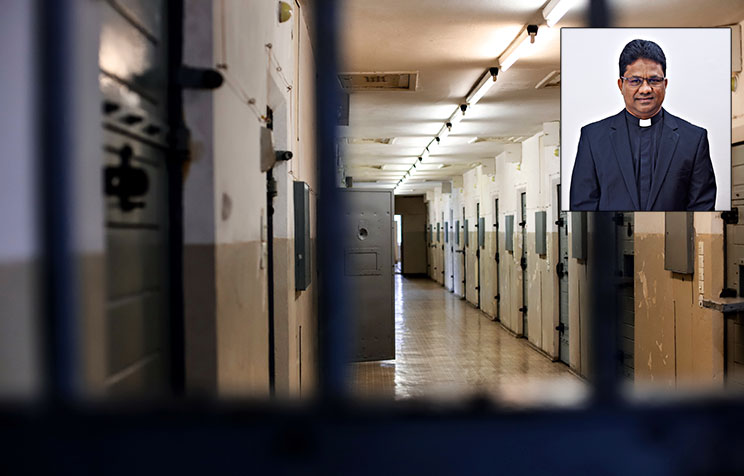 Violence is ever-present in prison. “Beyond the lack of freedom, many are also exposed to gang activities, violence and sexual abuse,” says Fr Babychan Arackathara (inset).

The way that society deals with crime and those who have committed them needs a new vision, a priest says. Christen Torres reports.

South Africa has the highest prison population in the whole of Africa, with the Justice and Correctional Ministry reporting in 2017 that 158111 inmates made up the prison population, including pre-trial detainees.

Overcrowding is endemic. For example, at its worst, Pollsmoor Prison in Cape Town, once the forced “home” of Nelson Mandela, was overcrowded by 247%. According to the latest available figures, for 2018, the jail is overcrowded by 136%.

Many of the human rights violations offenders — and even awaiting trialists — encounter in their cells, are a direct result of overcrowding in prisons. These include dirty quarters, insufficient food, availability of drugs and contraband cellphones, lack of amenities, gang control and corrupt wardens, and mixing first-time offenders with hardened criminals.

Fr Babychan Arackathara, the former prison chaplain of the Cape Town archdiocese who is now based in the Texan city of San Antonio, explained what it is like for a first-time prisoner.

“For the first-timer, it’s hugely a scary experience. To be with people you do not know and to be locked up most of the hours during the day is an awful experience,” he said.

“They go through trauma and depression. When the gate closes behind, them they feel rejected by everyone. Some of them even blame God, and go into deep depression.”

He said that “being with people you do not know, have no common ground with, to live with different characters, are all serious challenges they go through”, said the priest, who in March published his acclaimed book on prison ministry, Light Through the Bars.

“Lack of family support during incarceration can be a huge challenge that leads to low self-esteem, hopelessness and feeling of loneliness,” said Fr Babychan, who is almost universally referred to by his Christian name.

Violence is ever-present in prison. “Beyond the lack of freedom, many are also exposed to numbers-gang activities, violence and sexual abuse,” the priest said.

Things don’t get much better when an ex-offender is released from jail as the stigma of incarceration is not easy to shake off.

Fr Babychan understands the resentment society tends to have towards those who have committed crimes.

“In general the public is angry and upset about the high rate of criminality in the country,” he noted. “Most people are either directly or indirectly affected by crime, gangsterism and drug peddling. The communities are becoming more and more unsafe despite all the safety measures.”

But he also decried that often ex-offenders struggle to reintegrate into society, particularly finding difficulty in securing work after they have been released from prison.

Ex-offender Denzel Bailey explained: “I got my freedom back, but companies will never look at me the same way again. In interviews, everything goes well until they ask about my record. If I play open cards, I never hear from them again.”

The difficulty in finding work not only affects the ability to make a living for ex-offenders and their families. In the absence of alternatives, limited opportunities increase the chances of ex-offenders getting involved in crime again, even if they intended to go straight after their incarceration.

Communities may be “upset, angry and frustrated with the rate of crime in our country”, Fr Babychan said, but “how do we respond to these incidents of crime as individuals, community and as a country?”

Obviously, all must take a stand in response to crime, he said, but how are we to do so?

“We could clamour, along with the vast majority of citizens, and burst out in emotional frustration and pain [in calling for] long sentences, harsher conditions, and even promote capital punishment,” he said.

“Or we could search for solutions by asking ourselves: what is happening in our community? Who are these criminals? Are our correctional centres really correctional in nature? Why do we have such a high recidivism rate?”

Fr Babychan proposes a new way for communities to approach offenders, calling on people to help those involved in the prison ministry under the auspices of the Church.

One such ministry he served as chaplain for many years.

The Prison Care and Support Network (PCSN) is a non-profit organisation which falls under the umbrella of the archdiocese of Cape Town.

The PCSN, whose new chaplain is Fr Dominic Hemboldt, has been in existence for the past two decades with the aim of bringing about spiritual assistance and pastoral care to prison inmates and to ex-offenders, and supporting their families.

A key aim is to provide continued support to ex-offenders to help them reintegrate into society.

The PCSN makes use of a variety of interventions in eight prisons within the Western Cape. These include one-to-one-sessions, personal development workshops, bursary support, and restorative justice programmes, as well as art support programmes, and a number of other activities.

“Spiritual support for inmates is critical in changing their thinking and behaviour, given the emptiness and hopelessness they find themselves [when] inside the prison,” Fr Babychan noted.

He also offered spiritual guidance for the rest of society. “Nobody can claim to be righteous. In fact, it’s our self-righteousness that makes us think of prisoners as less than ourselves,” he said.

“They are human beings who, due to one or the other reasons, made mistakes and inflicted pain or loss on others. They have wronged the society—but can we write them off?”

There are a number of ways, Fr Babychan proposed, to fight both crime and the stigma attached to being in prison. These include the eradication of poverty and creation of employment; the promotion of education with particular attention to the vulnerable youth; serious interventions to fight corruption among police; transferring police on a regular basis to break corrupt practices and collusion with gangsters; and involving the community in finding solutions.

“Prisoners are from our own families, our brothers and sisters. The families very often go through the painful prison sentence along with the incarcerated. There are several children whose either father, mother or both are incarcerated,” the priest said, appealing for some compassion.

As Christians we are mandated by Christ “to visit the prisons”, Fr Babychan noted, pointing to Scripture: “Remember those in prison as if they were your fellow prisoners, and those who are mistreated as if you yourself are suffering” (Hebrews 13:3).