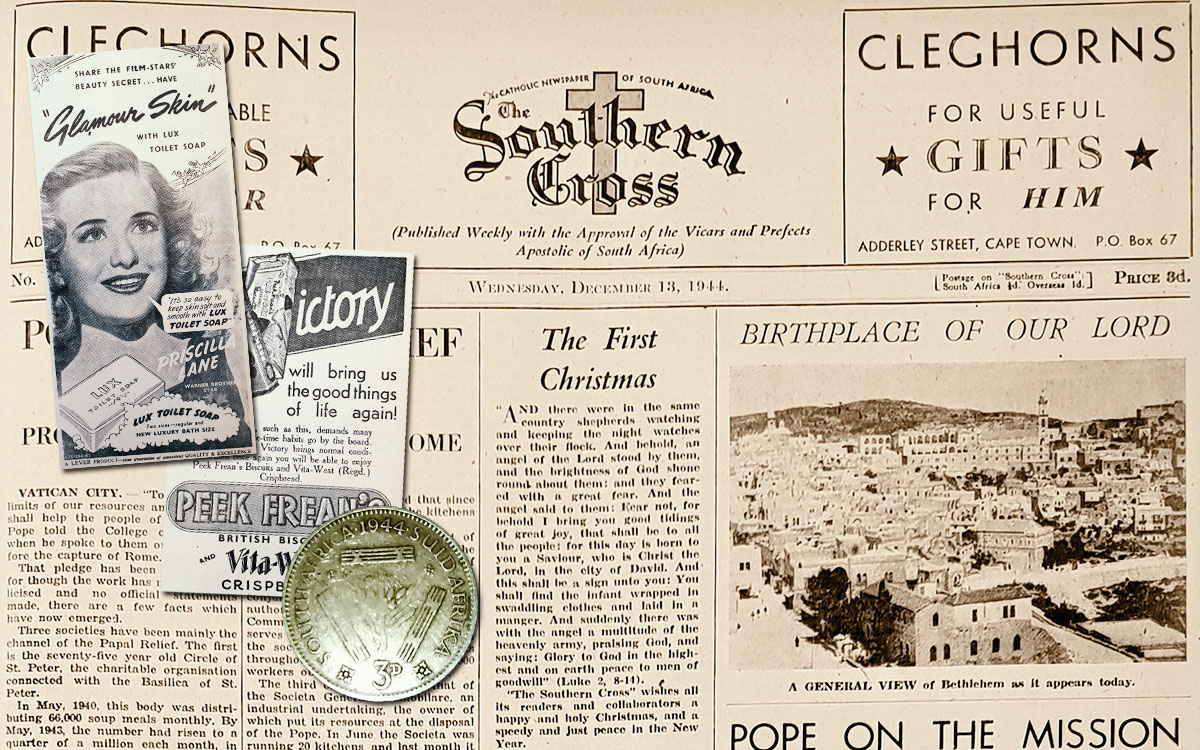 The front-page of The Southern Cross of December 13, 1944

The war-time Christmas edition of The Southern Cross in 1944 was a 12-page affair. GÜNTHER SIMMERMACHER steps into a time-capsule from 75 years ago.

In 1944, the concerns of the Church were still with the Second World War, but the outlook was more positive than it had been the previous Christmas.

Victory over Nazi Germany would come within half a year.

At a time of paper restrictions, the Christmas edition, dated December 13, 1944 (and issue number 1262) came in at 12 pages, four more than the usual volume. The cover price was 3 pence.

There are four photos and two line illustrations in the issue: two on the cover, of Bethlehem and the altar of the “Catholic church of the Nativity” there (commonly known as St Catherine’s), one of US forces in procession in liberated France, and one of Capt Robert Collingwood, who received a decoration for war heroism.

The focus on the front-page is on Pope Pius XII, under whose auspices 193000 meals are being distributed every day to the hungry in Rome. Those hungry people doubtless include some of the 53000 refugees in Rome taken in by the Papal Refugee Commission.

The Church is also running soup kitchens for refugees in other parts of Italy.

Long-serving women’s columnist Mary Singleton tells a Christmas story, while Fr Gavan Duffy SJ in part 292 of his “Theology for the Layman” reflects on the Creed.

The Paulist Fathers in Johannesburg answer a series of questions from readers. Among other things, they explain why it is possible to have Mass said in honour of saints.

In her “Children’s Corner”, Aunt Celia welcomes a new “Cornerite” in six-year-old Elaine Thompson, who shall be known as “Moonbeam”.

The “Topic of the Week” addresses various current issues. Among them is an objection to the call for stricter pass laws to control the influx of Africans into the cities. The Southern Cross suggests that “the real solution lies in the provision of just wages, proper family housing and religious education”.

In a two-part leader, editor Fr Owen McCann reflects on the Immaculate Conception, and on Christmas gifts, saying that the practice of giving presents can be criticised “because people have forgotten why the gifts are made”.

There is no supplement; the Christmas articles are mixed with all the other material. But there are plenty of seasonal offerings.

“Sacerdos” writes in detail about the two-hour Christmas Mass at an unidentified mission station.

Fr J Kendal SJ suggests in a forthright reflection that an antidote to the desperate seasonal merriment that is meant to mask the drudgery of daily life is to have a good Christmas liturgy.

“Christmas in America” is the subject of Fr J Bradley CSP, who suggests that after church services on Christmas morning, families rush “home through the snow”.

Army chaplain Fr P Poole CF writes about Christmas 1941 when the Fifth Brigade South African (made up of South African, Irish and Scottish soldiers) “had fallen back on Mersa Matruth after their tragic rout at Sidi Rezegh”.

There are a couple of poems and a short story by Edith Mary Power titled “Men of Goodwill”.

In 1944, Catholic businesses supported the Catholic press—and non-Catholics, too.

Cleghorns department store in Cape Town occupies the earpieces on the front-page, where fellow advertisers C to C cigarettes used to be placed.

For your dry-cleaning use Nannucci’s in Cape Town (still in existence, but not advertising); for your  engineering needs try Woolf in Bloemfontein; and for a new suit Croft, Magill & Watson gents’ outfitters in Kimberley.

Catholics are advised to make their brandy, gin and altar-wines Santy’s, buy their Catholic devotionals from the Catholic Repository in Johannesburg’s Kerk Street, get their Catholic Directory for 1945 from The Salesian Press, and send their children to any of the many Catholic boarding schools (many of them now long gone).

The Apostleship of the Sea asks Catholics to donate rosaries, old issues of The Southern Cross and other items for distribution among seafarers in South African ports.