Christmas Thoughts from 1700 Years Ago 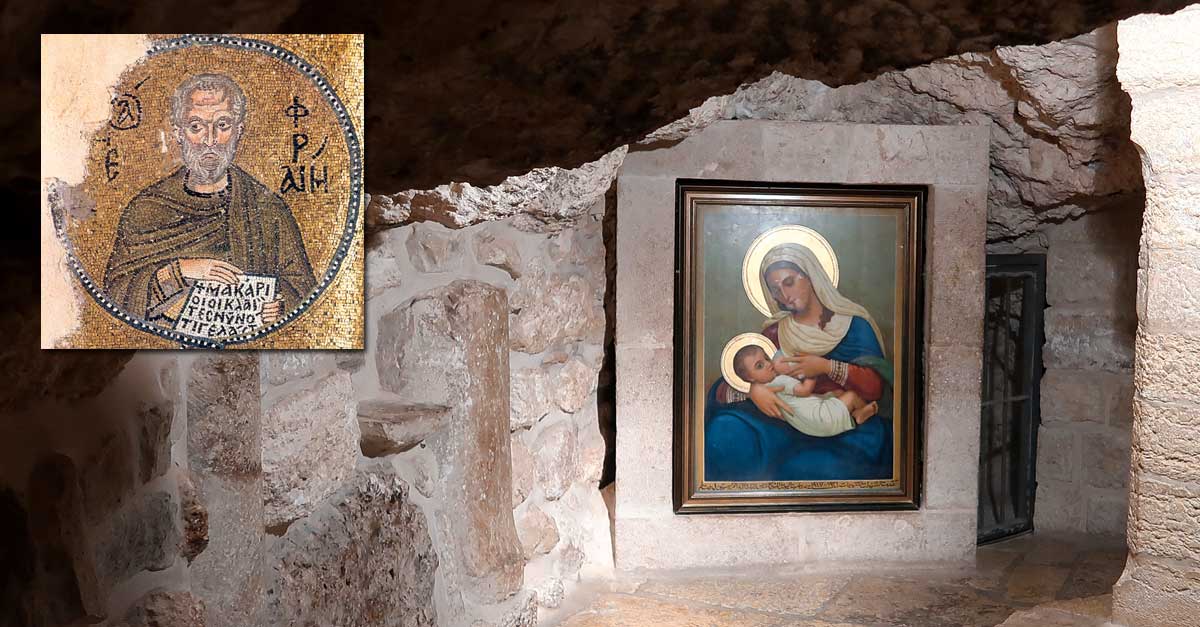 A painting of Mary suckling Jesus is seen in the Milk Grotto in Bethlehem, which tradition says is the cave where the Holy Family hid during the massacre of the innocents. (Photo: Günther Simmermacher) (Inset) St Ephrem of Syria

One of the great poets of the ages, St Ephrem of Syria left us with a treasure of profound Christmas reflections. Who was he, and what did he say about Christmas almost 1700 years ago? PHILIP WERNER explains.

Do you know St Ephrem of Syria? This Christmas is a good time to meet him, for he wrote some magnificent reflections on the feast of the Nativity.

St Ephrem lived in the 4th century and is one of the Fathers of the Church. He is also a Doctor of the Church, one of only 36 men and women who bear that title.

Ephrem was born in around 306 AD, a time of the last persecution of Christians in the Roman Empire, in Nisibis (now Nusaybin in Turkey). He was about seven when Christianity was legalised.

His parents were Christians, and as a youth, Ephrem was baptised. Possibly at the same time, he consecrated himself to the Church and was made a deacon.

As a deacon he composed hymns and wrote biblical reflections. Ephrem is credited with founding the theological School of Nisibis, which would become the centre of learning of the Syriac Orthodox Church.

Growing up, he witnessed a Church that was gaining in confidence under the patronage of Emperor Constantine, but was also troubled by division, especially in the dispute over the Arian heresy.

And after the death of Constantine in 337, Nisibis was repeatedly besieged by King Shapur II of Persia. The first two sieges were miraculously repelled. The third, however, ended with the surrender of the city to Persia and the expulsion of its Christians in 363.

Ephrem moved to Edessa, a centre of philosophical and religious debate (and, sometimes, confrontation). Loyal to the Nicene Creed, which the Arians rejected, Ephrem composed countless hymns in defence of orthodoxy. Many of his hymns are still being used in Syriac churches.

He died on June 3, 373, from the plague, having been infected as he was tending to the sick. He was immediately regarded as a saint.

Pope Benedict XV proclaimed St Ephrem a Doctor of the Church in 1920. The Catholic Church marks his feast day on June 9.

Among the hundreds of St Ephrem’s hymns which have survived, at least 19 are on the theme of Christmas. A recurrent theme in those is the juxtaposition of the innocent, helpless baby Jesus with the divine Christ.

So he could write: “When he sucked the milk of Mary, he was suckling all with life. While He was lying on his mother’s bosom, in his bosom were all creatures lying. He was silent as a babe, and yet he was making his creatures execute all his commands” (Hymns on the Nativity, 3).

Returning to Hymn 3: “Mary bare the silent babe, while in him were hidden all tongues! Joseph bare him, and in him was hidden a nature more ancient than anything that is old! The High One became as a little child, and in him was hidden a treasure of wisdom sufficing for all! Though Most High, yet he sucked the milk of Mary, and of his goodness all creatures suck!

“He is the Breast of Life, and the Breath of Life; the dead suck from his life and revive. Without the breath of the air no man lives, without the Might of the Son no man subsists. On his living breath that quickens all, depend the spirits that are above and that are beneath.”

Hymn 4 has Mary lulling her babe with autobiographical words: “Who has given me, the barren, that I should conceive and bring forth this one that is manifold; a little one, that is great; for that he is wholly with me, and wholly everywhere?

“The day that Gabriel came in unto my low estate, he made me free instead of a handmaid, of a sudden: for I was the handmaid of Your Divine Nature, and am also the mother of your human nature, O Lord and Son!

“‘How am I astonished that there is laid before me a Child, older than all things! His eye is gazing unceasingly upon Heaven. As for the stammering of his mouth, to my seeming it betokens, that with God its silence speaks.”

What are we celebrating?

In Hymn 11, Mary continues to address her son, knowing that this child belongs not to her but to the world: “I shall not be jealous, my son, that you are with me and also with all men. Be God to him that confesses you, and be Lord to him that serves you, and be brother to him that loves you, that you may gain all.”

And what are we celebrating at Christmas? In the long Hymn 15, St Ephrem tells us: “Celebrate, O nations, this feast, first fruits of all feasts; recount the sufferings that were, and the wounds and pains, that we may know what plagues he healed, the Son who was sent.

“Celebrate, O saved nations, him who saves all in his birth. Even my feeble tongue has become a harp through his mercy.

“The excellency of the firstborn, in his festival let us sing: Blessed is he who has made us meet for his feast!”