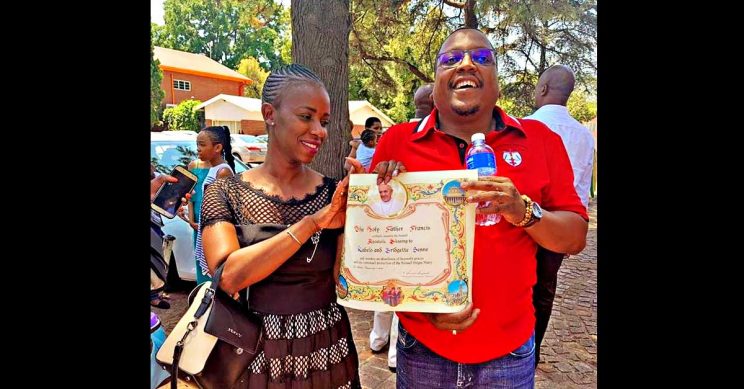 When Fr Patrick Rakeketsi CSS called a Pretoria North couple to come forward at Mass, they were surprised to receive a special blessing from Pope Francis.

Bridgette and Kabelo Senne received the papal blessing in recognition of their work as regional coordinators of the Catholic Engaged Encounter (CEE) programme.

“When Fr Rakeketsi called us to the front, I thought he was going to inform the congregation about our re-election as regional leaders of CEE Africa. I was dumbstruck when he presented us with the special blessing; I thought I was dreaming. It’s a moment I will never forget,” Mr Senne said.

For Mrs Senne, receiving the award at St John the Baptist church felt like she was touching the Holy Father himself.

“This is such a great blessing, I was overwhelmed, speechless and too emotional, I couldn’t stop crying tears of joy. I felt humbled that our work and time devoted to the ‘Love Ministry’, as I fondly call it, is noticed, especially by the most high in the Church,” she said.

The Church requires engaged couples to prepare for marriage, for example through workshops run by CEE.

The programme is endorsed by the bishops as one of the effective and relevant programmes to accompany engaged couples, and for implementing Pope Francis’ apostolic exhortation on marriage and family life, Amoris Laetitia.

Though developed around the Catholic faith, couples from other denominations are welcome.

CEE was established in 1981 and is presently active in Pretoria, Johannesburg, Cape Town, Durban, Gaborone, and in Kenya.

It is currently expanding to Tzaneen, Kokstad, Port Elizabeth, Klerksdorp, and in eSwathini.

Further expansions are planned in Oudtshoorn, Kimberley, and Francistown in Botswana.

Mr and Mrs Senne were re-elected for a second three-year term as the regional coordinators for the Africa region in October, with Fr Rakeketsi as their spiritual director.