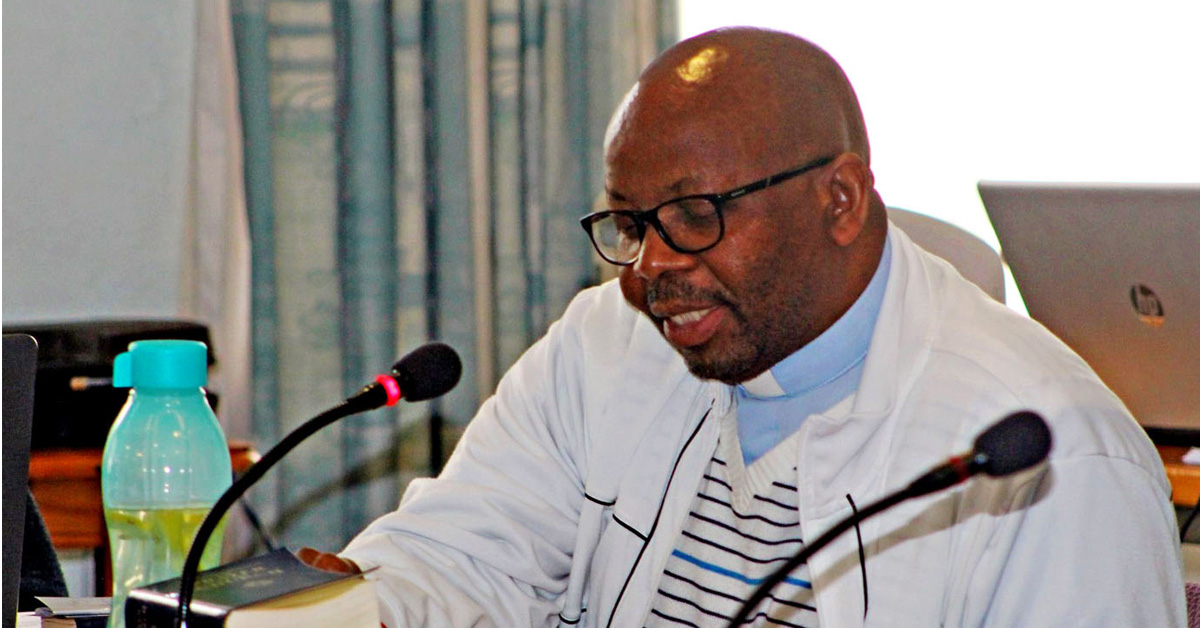 Bishop Zolile Peter Mpambani has headed the diocese of Kokstad since 2013. After his appointed as the seventh archbishop of Bloemfontein, he will succeed Archbishop Jabulani Adatus Nxumalo, who has retired as of April 1 at the age of 76.

“The appointment brought mixed feelings for me,” Archbishop-elect Mpambani told The Southern Cross.
“I’ve been busy with a lot of work in Kokstad, and was still developing a few things, so being told I’ll have to be in Bloemfontein in two months leaves very little time to finish things off—and more so because of the lockdown.”

On the other hand, he said: “I know that the same work that I’ve been doing here in Kokstad I could also do in the archdiocese of Bloemfontein, which tells me that I should look forward to the future.”

He is the third successive bishop of Kokstad to become an archbishop, following Cardinal Wilfrid Napier, who headed the diocese from 1980-92, before transferring to Durban, and Archbishop William Slattery (from 1993, moved in 2010 to Pretoria).

Appointed bishop of Kokstad on April 6, 2013, Bishop Mpambani said that one of his highlights in the diocese was getting to know all of the faithful.
“In 2015 I visited every parish and every outstation, to know where they are worshipping and to know where and which parishes and outstations my priests work in. Even the outstations where there were four to five people, I went there to visit and to celebrate Mass with them, just to get to know the situation in the diocese,” he said.

Before he became a bishop, the member of the congregation of the Priests of the Sacred Heart of Jesus served in his home diocese of Aliwal North, in the Eastern Cape.

“I worked under [now retired] Bishop Fritz Lobinger, who was very big on empowering the faithful. This is what I’ve been driving in Kokstad: that they know their faith and that they know the teachings of the Catholic Church.”

Of his move to the archdiocese of Bloemfontein, Archbishop-elect Mpambani said: “I’m not fearful.” He believes his experience of leading the diocese of Kokstad for seven years has prepared him.

“When I was appointed as the bishop of Kokstad, being in charge of a diocese after having been a priest, I didn’t know where I was going to begin and go forward, but it has taught me a lot and given me so much experience. This is what I’ll take with me to Bloemfontein,” he said.
“I know what is expected of a bishop, and what to expect of the faithful, the priests and everybody.”

Archbishop-elect Mpambani hopes to draw from the experience of his predecessor, who had headed the archdiocese since 2005, after three years as auxiliary bishop in Durban.

“Having Archbishop Nxumalo there, being able to have some sort of orientation, really helps. And then I’ll have my own meetings, and then I can see what the expectations are and how we are going to move forward.”

Archbishop-elect Mpambani said he is looking forward to making Bloemfontein his home.

“I believe that cooperation is very important, I hope nobody will fold their arms and say, ‘Let’s see what the new archbishop is going to teach us.’ Instead, I hope I’m going to find people who are going to say, ‘This is what we know, the knowledge we have, this is what we are doing, can you add to this’,” he said.

“I look forward to working with everybody. After 15 years [of Archbishop Nxumalo’s leadership], I think the people of Bloemfontein are strengthened and empowered enough,” Archbishop-elect Mpambani said.

Born on February 20, 1957, Bishop Mpambani joined the Sacred Heart congregation 1982 and he studied at St Joseph’s Theological Institute in Cedara (then still Joseph’s Scholasticate. He was ordained a priest on April 25, 1987.

After serving as pastor in different parishes in Aliwal North, he was appointed to the leadership of his congregation in its central government in Rome from 1998 to 2003.

During this time he visited regions of the Priests of the Sacred Heart scattered in many countries around the world. Bishop Zolile Mpambani speaks English, Xhosa, Sotho, Italian and Portuguese.

According to Archbishop Nxumalo, this background makes him the best man for the job in the city of Bloemfontein, which he said is becoming more and more cosmopolitan, multi-ethnic and international because of immigrants from Europe, Asia and African countries.

After serving at the general administration in Rome, Bishop Mpambani was appointed from 2007-11 to its formation house in Pietermaritzburg.
Thereafter he was assigned as pastor of St Francis church, Aliwal.

He was appointed provincial superior of the Priests of the Sacred Heart in February 2013, but his term was cut short within two months with his appointment as bishop of Kokstad.

As a member of the Southern African Catholic Bishops’ Conference, he served in the Department of the Laity Formation, responsible for promotion and strengthening of Marriage Encounter movement and family life.

The date of Archbishop-elect Mpambani’s installation in Bloemfontein will be governed by the terms of national lockdown and restrictions which might be in place afterwards.