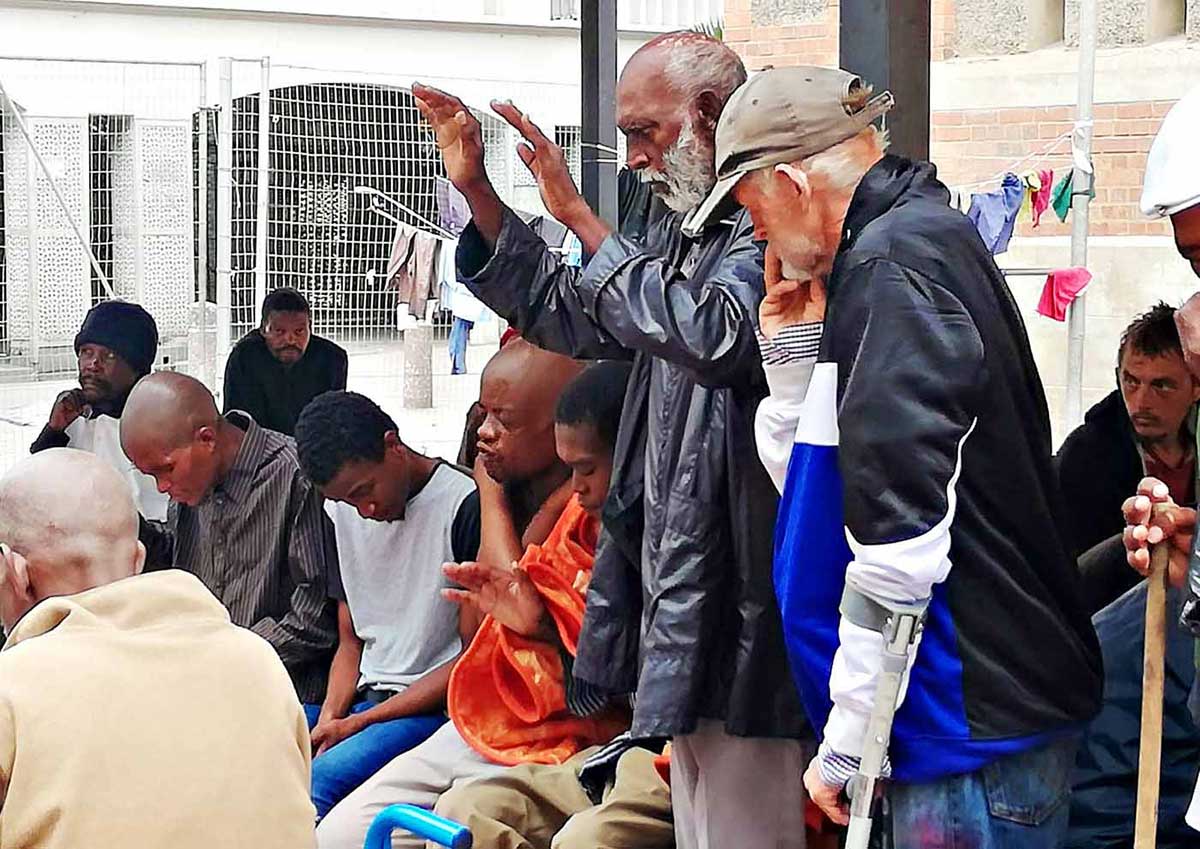 For many Catholics, this year’s Holy Week is an experience of “virtual church”—those truly observing the lockdown, or people like my parents in their 80s, who are too scared to go outside, have stayed connected to their religious communities through the power of social media.

For people like me in Durban, working on the frontline of protecting the homeless from the virus, our Church is anything but virtual. It is one of the most real experiences of Church I have ever had.

The story of Christ’s Passion in Holy Week and the history of the Israelites fleeing the Pharaoh share a visceral human reality: that when we find ourselves anxious, fearful and alone, we turn to God in our time of need.

The homeless in lockdown

That is true of the homeless who two weeks ago were told they would be arrested if found on the streets yet have no alternative place to go. Like the Jews in Egypt, they were exiles in the only land that they knew; like Jesus’ followers they found themselves on the wrong side of the law.

The process, overseen by the Catholic deputy mayor of eThekwini, Belinda Scott—the Moses figure in this extraordinary story—and assisted by NGOs and municipal officials, began at the Durban Exhibition Centre.

Here, over three days, we processed and screened 2000 homeless people and also managed to feed them, even though there were twice as many as we had expected—another parallel to the New Testament.

Moreover, the choice of location was significant. The DEC stands next to the Durban ICC named after that great Congregationialist struggle hero Rev Albert Luthuli and on the ruins of the old prison, a place of unjust punishment like the praetorium of the Gospel.

But more specifically, this Friday thousands of Christians of all denominations should have gathered at the DEC, as they do every year, to march in silent witness of the events of Good Friday (following a tradition started by our own Archbishop Denis Hurley and Paddy Kearney).

Instead, in a chilling anticipation of this, thousands of frightened homeless men and women gathered to bear witness—though definitely not a silent witness—to the failures of an economic system that had left them struggling on the streets while others were busy stockloading everything they could buy.

Since those hectic early days, here in Durban we have managed to settle, feed and care for 1700 homeless people in emergency shelters around the city.

Visiting these every day, is a constant reminder to me that the word of God is written not only in sacred scriptures but in the lives of God’s daughters and sons, most of all in the poor and marginalised.

For Catholics we have ended our time of Lenten fasting—hence the joy of chocolate at Easter.  But for Christians working in this programme, our Lent will continue beyond while lockdown is in place.

It mirrors the Lenten traditions of abstaining (usually from sleep or time with our families), alms-giving (because this whole operation is costing the municipality and the NGOs a lot of money) and prayer (for that is the only way that we can get through this together).

In fact, we have a team of interfaith chaplains, under the expert guidance of Fr Stephen Tully, a founder of the Denis Hurley Centre.  So that means that, even when we do not have time to pray, we know that there are others praying with us and for us.

A mark of how typically Durban these chaplains are, came when a Christian site manager at the shelter behind the Jewish club invited a Hindu priest to lead Muslim prayers last Friday!

Sometimes it feels that each of us is carrying our cross on our own.  But so often—as with the African Simon of Cyrene in the Gospel—a stranger emerges from the crowd to help us carry our multiple crosses.

So Lent is not a time of relentless darkness, and so too, our experience in the shelters and camps is one which is lightened by moments of grace.

The Israelites in the desert complained to Moses that they were better off in Egypt and God sent them manna from heaven.  The homeless, like so many of us, having received then complain that they have not had enough.

Manna for them has come in the form of endless offers of food—from Christians, Muslims and Hindus—and also soap and toothpaste and blankets.

There have been Gethsemane moments of violence—a crowd of angry homeless men baying at me in the darkness of the night would make for a perfect Caravaggio painting.

But there have also been Bethany moments of peace: reuniting a pregnant homeless woman with her boyfriend, or our nurses dressing the wounds of so many who are neglected by Government health services and left to suffer.

The Gospels and the Book of Exodus are both stories of journeys. Our homeless are of course not moving (or not supposed to), but some are undergoing profound inner journeys.

This lockdown gives an opportunity to reflect on their lives, to talk to counsellors and social workers, and most importantly to cleanse themselves of the shame of the drugs that destroy their souls.

The Gospel is a story of turning the world upside down to find our common humanity. In the same way, the experience of the homeless shelters has created unexpected paradoxes: a homeless man, BonganiMadida, who is a site manager being addressed as “Sir” by the police; NGOs and municipal officials working side by side rather than at loggerheads; homeless people discovering that their basic needs can be met by the government once they are considered as a priority; people of all religious communities working with each other in partnership.

When I worked with the Jesuit Refugee Service in a Ugandan camp many years ago, a favourite Biblical text was from Revelation (21:1ff) which speaks of a new heaven and new earth.

In these weeks of lockdown I have seen glimpses of a new South Africa, one that we are preparing for now:

For us this is a long Good Friday.  But it will end with new life.

We know that the Jews wandered 40 years in the desert, that Catholics fast for 40 days during Lent, and South Africa struggled for over 40 years through Apartheid.

But we also know that liberation will arrive and we shall overcome. Individuals will overcome their addictions and their sense of loss; key players will overcome their pride and learn to work together; and as a city Durban will be as proud of our compassion as we are of our beaches and our conference centres.

There will be a time of Resurrection.