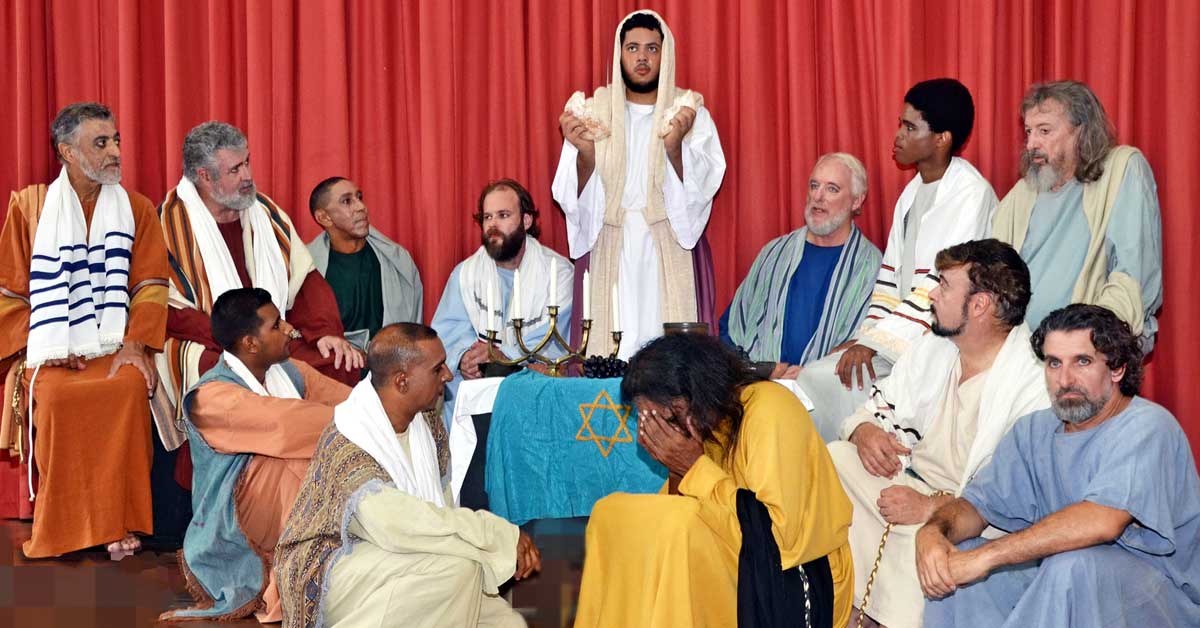 Cast members rehearse the Last Supper for the Durban Passion Play, which had to be called off due to Covid-19 restrictions.

The cast and crew of the put in a combined 135000 hours of preparations for the Durban Passion Play and were devastated that on the day of the final rehearsals, the play was cancelled due to the COVID-19 pandemic—and no new dates are available for a staging it at another time.

It was “with a heavy heart” that the Durban Catholic Players’ Guild had to call off the 15th Durban Passion Play, which had been scheduled to be staged at the Playhouse Drama Theatre from March 25 to April 12, said director Dawn Haynes.

“Of course, we are disappointed, but naturally the health and well-being of the cast, crew, staff and audience are of paramount importance. We will meet soon to decide how to take the project forward,” he said. The Catholic Players’ Guild has asked supporters to consider donating their bought tickets for the cancelled Durban Passion Play towards the costs of the production.

Dale Collings who was to play the role of Christus—his first involvement in the Durban Passion Play—said he felt “lost” after the decision to cancel the play had been made.

“This experience has been life-changing for me. I have come to know the true meaning of the scriptures and have been deeply moved by seeing all these events through the eyes of Jesus,” Mr Collings said.

“I am just so sad that I cannot share this and spread the message of the Passion through our performances.”

Many of the cast testified to how their faith has been renewed, how their spirituality had deepened and how so many wonderful friendships had been made during the preparations for the play, said Ms Haynes.

“They are all sad that this cannot be shared with the audience in order to proclaim the message of Easter—but there is something deeply humbling and perhaps hugely profound about preparing so hard for an opening night which won’t happen, at least not for now,” she said.

She listed the loss: “The hard work without the spotlight; the rehearsal without the applause, without the accolades and ovations; no backstage banter and no adrenalin rush.”

The management committee have probably put in twice the number of hours, and the directors have invested probably around 500 hours each—all for no financial reward.

“We have done this for the greater glory of God,” Ms Haynes said.

“It has been the most remarkable experience—friendships have been made, connections forged, skills learned, and great fellowship enjoyed,” she said.

“It has also been a deeply prayerful time, most especially against the backdrop of the lead-up to Easter and having to make difficult decisions,” Ms Haynes added.

“Perhaps Passion Play 2020 is about the journey, not the destination, about lessons in humility, humour and grace. It certainly has been a Lenten experience with a difference.

She hopes that the Passion Play might be staged next year at Easter, “but this is uncertain”, Ms Haynes said.

The Catholic Players’ Guild has asked supporters to consider donating their bought tickets for the cancelled Durban Passion Play towards the costs of the production. With no income for the ticket sales, the financial implications of postponing the production are enormous. By not claiming for a refund, patrons will help offset the costs.

Any cash payments for ticket refunds must be claimed from Playhouse Theatre Box Office (031 369-9596 for info), not from Webtickets. All other payment options can be refunded by Webtickets.