Today a great voice of Catholicism in South Africa fell silent. Fr Emil Blaser OP died at the age of 78 at 16:55 on Monday, November 16 — on the feast day of St Margaret, the saint who shared the name of his beloved mother, Margherita.

It was no secret that Fr Emil had been ill for a long time. His illness was debilitating. First he lost feeling in his fingers and toes, then hands and feet, then his whole body. For a physical man, one who liked to talk with his hands, one who liked to embrace people, one who liked to get around, one who valued his independence, this illness was difficult to bear — physically, for it caused him great pain, and emotionally. In the past couple of years, Fr Emil felt isolated. This got worse as he lost his ability to even use a cellphone without assistance.

A few months ago he phoned me. It was an emotional call, and it very much sounded like a farewell. He phoned many other friends that day, and those of them I talked to later shared my impression that this was goodbye. He thanked me for my friendship, and I thanked him for his. We shared a few laughs, one last time. Often we were compadres in the trenches, especially in the long battle to get Radio Veritas permanently onto the airwaves. And very often, we simply enjoyed each other’s company. On pilgrimage, or over a meal. No visit to Johannesburg would be complete without visiting Radio Veritas and going for a meal with Fr Emil. 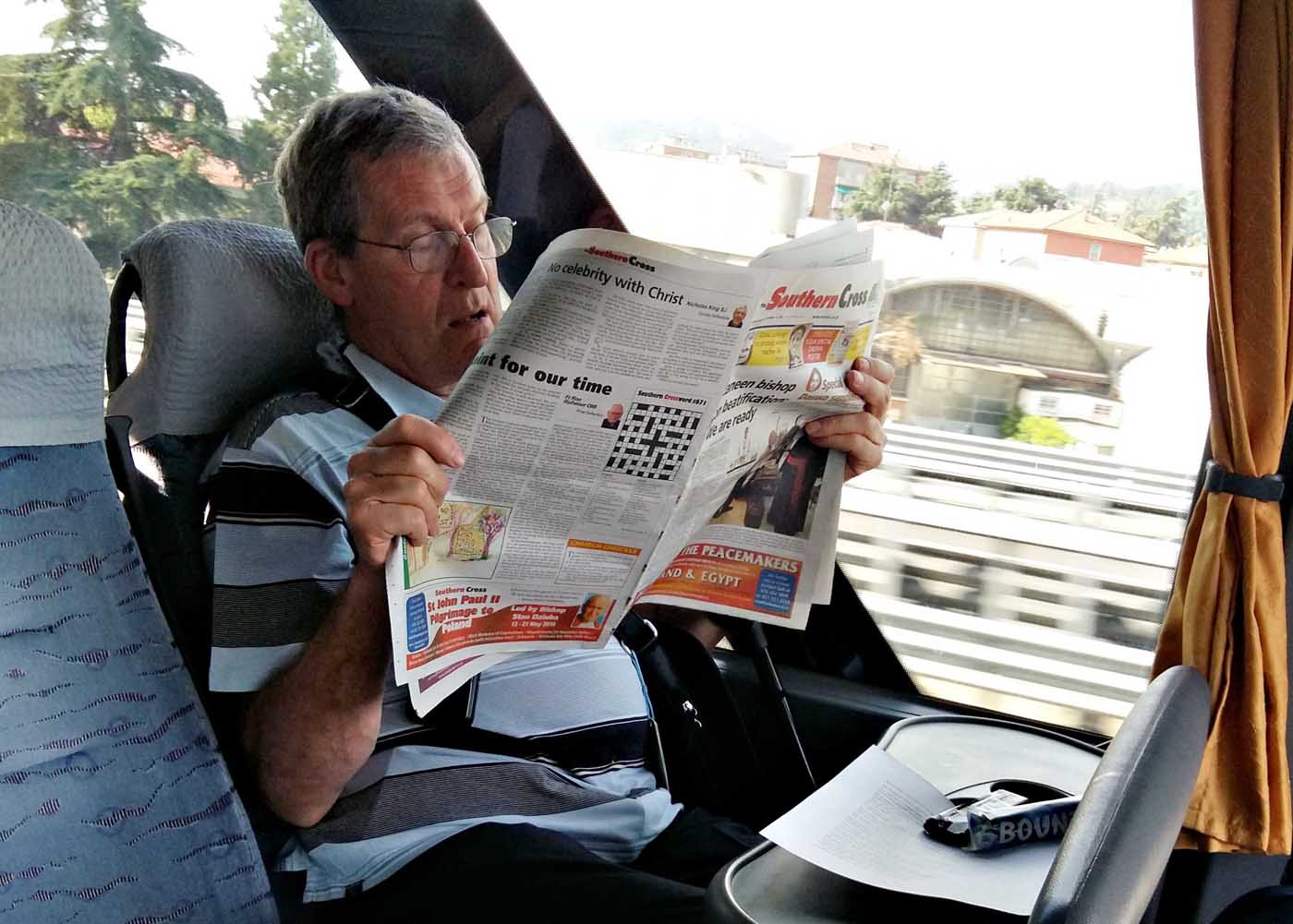 Fr Emil Blaser OP reads The Southern Cross on his way from Florence to Padua during the Saints of Italy pilgrimage in 2015.

Fr Emil was a superb radio man. He was self-effacing about calling himself a journalist. “No, you are a real journalist, I can’t compete with that,” he told me many times. Every time I’d tell him that journalists come in all shapes and forms, and that he very much was a journalist. I suspect that the radio work came so naturally to Fr Emil that he felt he couldn’t claim credit for it. But he connected with people on air, much as he did in person. That is the mark of a great broadcaster. And a great broadcaster, Fr Emil, is a journalist.

I last saw Fr Emil at Radio Veritas’ 20th anniversary celebrations in Johannesburg just over a year ago. I marvelled at this man still pouring himself out for his beloved radio station. He was overjoyed to see so many friends, as he always was. My wife and I had visited him in hospital some months earlier. I couldn’t recognise this unshaven man — had anyone ever seen Fr Emil with stubble? — and in his suffering, he understandably was not the lighthearted man we knew. But then we shared views on the latest Church news, and his face lit up and he issued some of those Blaser laughs. There was the Emil we knew! That Emil was still there, inside this incapacitated body. That Emil was there in this ugly hospital bed. That Emil was there at the anniversary celebration. That Emil was there when he phoned me (and many others) a few months ago.

That Emil was released from the body which in the end trapped his spirit. November 16 is a very sad day for those of us who knew and loved Fr Emil. But for Fr Emil, it was a good day. Freed from the shackles of this world, he is now meeting God. In heaven, Fr Emil, please pray for us.

This Was 2018: The Highlights and Lowlights of the Church Year

Catholic Martyrs of the Third Reich