Why Mary was Born Without Sin 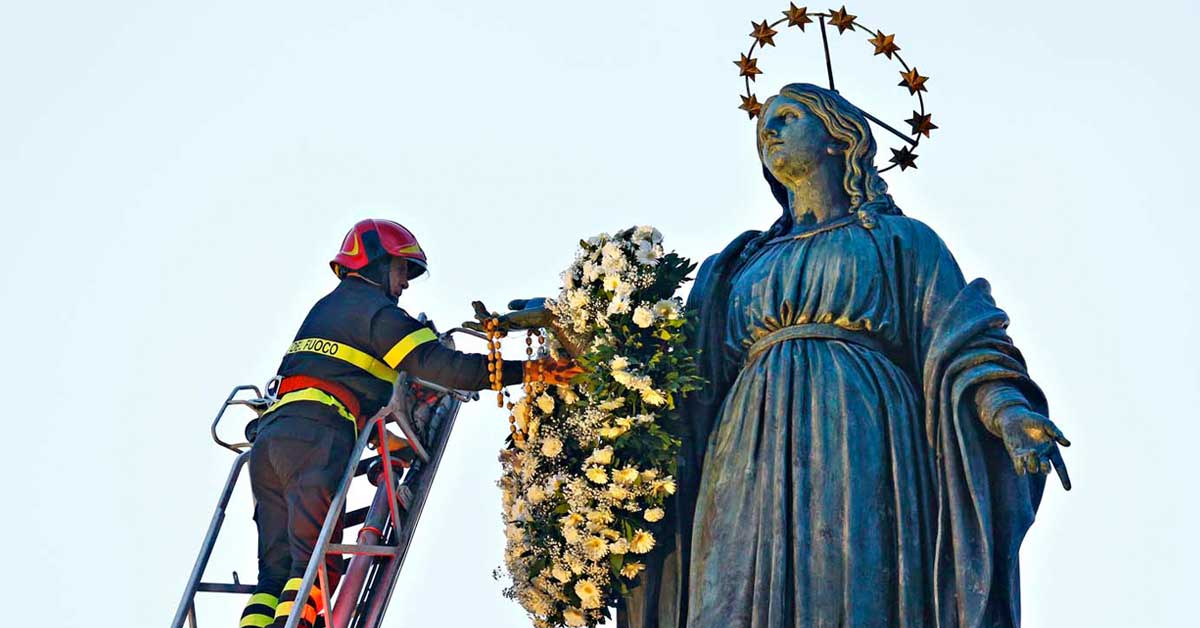 A firefighter places a wreath on a tall statue of Mary overlooking the Spanish Steps in Rome on the December 8 feast of the Immaculate Conception, an annual tradition going back to 1857. (CNS photo/Paul Haring)

December 8 is the feast of the Immaculate Conception. Michael Ogunu explains its meaning.

The papal definition of the dogma declares with absolute certainty and authority that Mary possessed sanctifying grace from the first instant of her existence and was free from the lack of grace caused by original sin at the beginning of human history.

In order to be born into this world, Our Lord could not take flesh from any mere human being. Our Lady was prepared from all eternity to be the Mother of God through the privilege of her immaculate conception.

The dogma of the Immaculate Conception developed throughout the history of the Church. The feast of Mary’s Conception was celebrated in the Eastern Church as early as the 7th century and in the Western Church by the 11th century. There were, however, theologians, such as St Thomas Aquinas and St Bonaventure, who opposed this teaching, stating that it removes Mary from the rest of humanity as needing salvation and detracting from the universality of the redemption won for us by Christ.

Bl John Duns Scotus, a 13th century Franciscan philosopher, resolved the confusion on this matter: Mary was free from sin from the first moment of her conception in the womb of her mother, St Anne, only in anticipation of Christ’s redemptive death on the cross. The merits and graces of Jesus transcend time and space. This is how the Blessed Mother was able to partake in those merits at her conception, even though the Lord had not yet died on the cross.

Protestants and other non-Catholic Christians assert that the Virgin Mary could not have been immaculately conceived, and that if she were conceived without sin, she would not have needed redemption as she herself had acknowledged in the Magnificat when she said: “My spirit rejoices in God my saviour” (Luke 1:47). They also maintain that in his first letter John states: “If we say that we have no sin, we deceive ourselves and the truth is not in us” (1:8). They therefore wonder how Catholics can claim that the Virgin Mary was sinless.

The Church believes that God’s Son, who was to come into the world through Mary’s consent, was himself her saviour. Mary, as a member of the human race, was in need of salvation. However, her salvation was “singular” (unique). In order to help us understand Mary’s need for salvation, theologians distinguish between a “liberative salvation” and a “preservative salvation”. Every member of the human race, with the exception of Mary, was liberated from sin and eternal damnation by the Cross of Jesus. By virtue of the Cross of Jesus, Mary was preserved from sin and eternal damnation.

If I save you in a fire…

An example might be helpful in coming to understand the significance of this distinction: If I save you from being burned to death in a fire, I would liberate you from the flames and save your life. You might correctly call me your “saviour”. But would I not also be your “saviour” had I preserved you from falling into the flames in the first place?

Every member of the human race, except Mary, is wounded by the sin of Adam. We are liberated from Adam’s sin by the grace of Jesus Christ. Mary, also by Christ’s grace, was preserved from being wounded by the sin of the race in her conception. In this way, Jesus saved her from sin and the effects of sin. You and I and all humankind are liberated from the “fire” of sin and eternal death in hell through the saving grace of Our Lord Jesus.

We receive this grace in baptism, and if we fall into mortal sin, through sacramental confession. Baptism, so to speak, “pulls us out of the fire”. When we deliberately fall into the fire again through our deliberate mortal sins, the Lord rescues us through the sacrament of reconciliation. Mary, by Jesus’ grace, was preserved from ever falling into that fire.

The Church finds support for the doctrine of the Immaculate Conception in the words of the Angel Gabriel to the Virgin Mary: “Hail, full of grace, the Lord is with thee; blessed art thou amongst women” (Luke 1:28). The Angel’s words would not have been entirely truthful had the Virgin Mary, for even one instant, been deprived of grace.

The sinlessness of Mary, the Church holds, is total and without exception. Beginning with her conception — by the foreseen merits of Christ — she was preserved from the stain and effects of original sin, so that never for a moment of her earthly existence did she come under the dominion of the devil. All other human beings inherit the consequences of the sin of Adam and Eve, and come into this world separated from God until restored to his friendship through the sacrament of baptism.

This column by Prof Michael Ogunu was printed in the December issue of The Southern Cross Magazine.