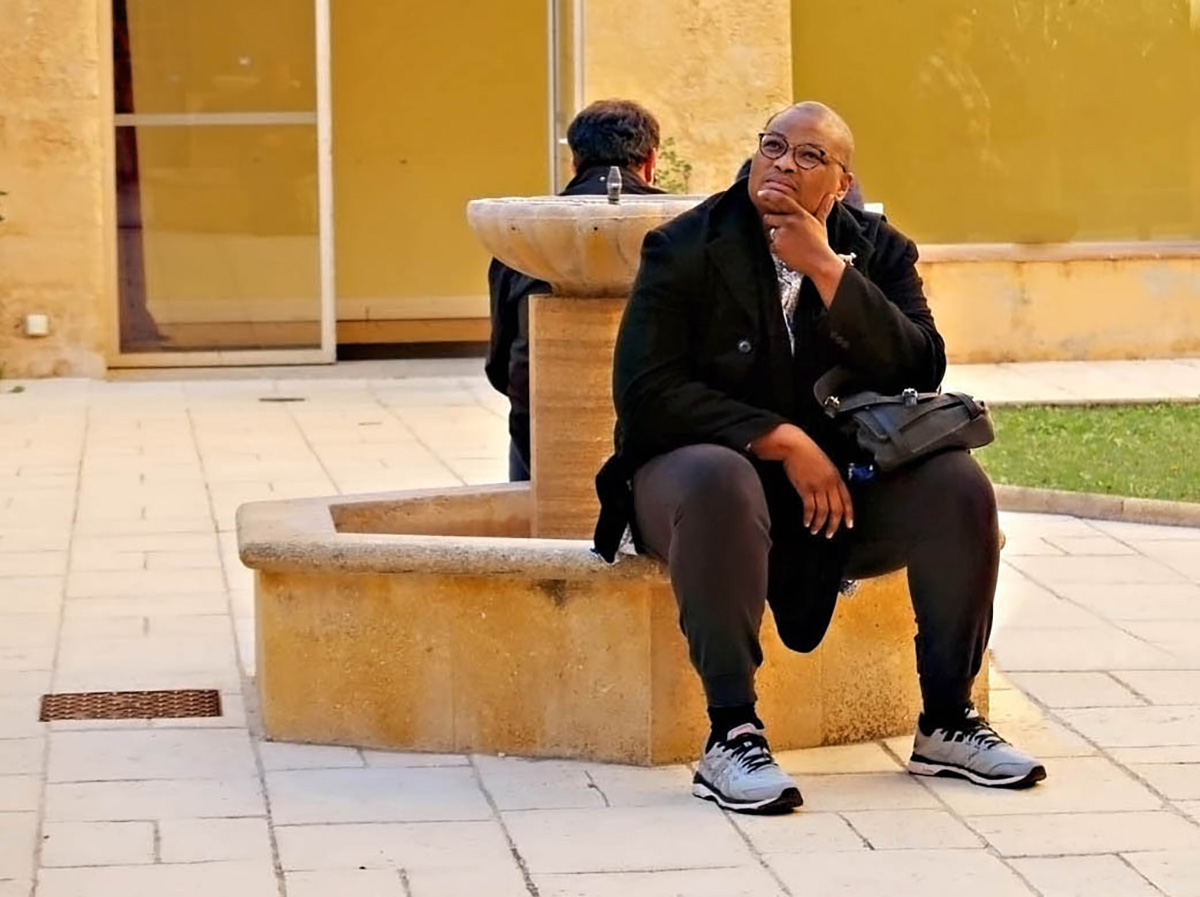 Fr Lawrence Mduduzi Ndlovu is a young priest who lives out his love of the faith, the arts, music and leadership to the fullest. DALUXOLO MOLOANTOA spoke to him.

The priest’s eyes light up as he says: “I am at home in the arts.” He should be. Having grown up in a home that embraced the arts through music, it comes as no great surprise that Fr Lawrence Mduduzi Ndlovu has taken to the creative world through music, visual art and poetry.

The Johannesburg priest recently launched his second anthology of poetry, titled MAYIBUYE: 25 Years of Democracy in South Africa. His first poetry anthology, titled In Quiet Realm, was published in 2018. His debut collection focused on issues such as envy, joy, despair and respect. His new body of work — the title of which in English means “Let Africa Return” — shines a light on the first 25 years of South Africa’s democracy, and the time preceding it. The poet illuminates the “miracle” transition leading up to 1994, and follows the ensuing years to the present through incisive, acute and at times razor-sharp words.

It is precisely the years leading up to South Africa’s transition that shaped the young Sowetan. “I was born in the 1980s. It was a fascinating time in our country. The State of Emergency was at its toughest. Nevertheless, considering the fact that I was born during the heyday of apartheid, I had a happy childhood — in spite of the civil unrest and the violence,” the 36-year-old recalls.

Diepkloof, his corner of Soweto, was the perfect grounding for his development in the Church. “My grandparents were founding members of our family parish, St Margaret’s in Diepkloof. I later celebrated my first Mass as a priest there.” He attended Holy Cross Primary and Secondary schools, also in Diepkloof. His father and grandmother were teachers at Holy Cross Primary. “The friends I was at school with were the same friends I attended church with, and hung out with in our neighbourhood”, Fr Ndlovu recalls. That way, the Catholic faith was always at the centre. The priest says he owes his faith to his grandmother. “She was my first catechist.”

But the priesthood was not quite on the cards yet. After high school, he began his journey with the written word. While studying for a diploma in journalism, he was offered a job as marketing coordinator at Carpe Diem Media. It was while working for the company’s flagship title, Soul magazine, that he became involved with Radio Veritas.

Left: Fr Lawrence Ndlovu with his parents on his first birthday. (Right) as a seminarian with his beloved grandmother.

At the same time, he was also involved in his home parish in various capacities. His work allowed him to contribute to the work of the youth office of the archdiocese of Johannesburg, and ultimately with the youth secretariat of the Southern African Catholic Bishops’ Conference (SACBC).

In 2006, he became a facilitator with the SACBC’s Education for Life youth programme. “I travelled a lot with the programme. We ran workshops countrywide, and even in Swaziland, which is part of the SACBC,” he says.

It was for his youth work that Fr Ndlovu would gain a place among the Mail & Guardian newspaper’s annual list of “200 Young South Africans” in 2016. The following year he was a recipient of the Youth Trailblazer Award from the Gauteng provincial government.

It was during the early period of this youth work that the signals pointed to a vocation to the priesthood. In 2008 he entered the orientation programme at St Kizito Seminary in Oakford, Pietermaritzburg. The following year he started his studies for the priesthood at St John Vianney Seminary in Waterkloof, Pretoria. He completed his studies there in 2012.

Then it was London calling. Arrangements had been made for him to continue his studies at Heythrop College, a part of the University of London. “London is an interesting city. It is very cosmopolitan and alive. It is very cultural but economics-minded. It is also very old but advanced. I fell in love with its beauty, order and, dare I say, its pageantry,” Fr Ndlovu recalls.

“My stay in London has influenced my liturgy. I vividly remember the glorious choir-singing and organ-playing at both Westminster cathedral and St Thomas parish in Chelsea,” he explains. It was also in London that his calling to the arts was entrenched. “London was buzzing with culture. I could, over a weekend, go to a music concert, an art gallery, the opera, the theatre, and so much more.”

By the time the young seminarian arrived in England, the former South African high commissioner to the United Kingdom, poet Lindiwe Mabuza, had left the city. They went on to form a friendship after meeting in Johannesburg. Mabuza contributed the foreword and a number of poems to Fr Ndlovu’s first poetry anthology, In Quite Realm.

“I always wrote poetry, but I didn’t care to get it published. Ms Mabuza inspired me to get my work published,” he says. “I first met her at my mentor Gibson Thula’s home in Houghton in Johannesburg. We realised that we were so much alike. Besides having spent some time in the United Kingdom, we both write poetry. We both love the visual arts, and, lo and behold, we even share a birthday.”

In his latest book, Fr Ndlovu pays tribute to a close confidant of Mabuza’s, the late African National Congress president Oliver Tambo. “Our liberation is sacred. We who enjoy it today, do so at a great cost borne by others. Oliver Tambo gave all of his life for this freedom,” Fr Ndlovu explains. “I remember his daughter, Thembi Tambo, speaking at an event, and saying that her father had our freedom as the uppermost in his priorities at all times during their time in exile.”

That passion for Africa finds expression in a poem in MAYIBUYE which borrows from the structure of the Creed. It opens with these verses:

I believe in one Africa

A united state of being

Honed by the very dust

From its northernmost peak

To the south most deep

I believe in one land

I believe in one people

I believe in one Africa

All the ages belong to her

Always is her time

Apart from Mabuza, Fr Ndlovu had a global star contribute a foreword for In Quiet Realm: the opera soprano Jessye Norman, who passed away not long after, in 2019. For MAYIBUYE, former president Kgalema Motlanthe wrote the foreword.

Fr Ndlovu says that he has thoroughly enjoyed the first five years of his priesthood. “I have been very fortunate to have been in a position to maximise my ministry through my writing, teaching, public speaking, and through other ways.”

He is currently the priest of Our Lady of Peace parish in Roodepoort, Johannesburg, and serves as the spiritual director of the Sacred Heart Sodality in the archdiocese of Johannesburg. He also teaches theology at St Augustine College, South Africa’s Catholic university. On Friday afternoons, he presents a programme on the arts on Radio Veritas.

(Left) Fr Ndlovu celebrates Mass at the tomb of St Eugène de Mazenod, founder of the Oblates of Mary Immaculate, in Marseilles during The Southern Cross’ “Catholic France” pilgrimage in October 2019

In October 2019, Fr Ndlovu led The Southern Cross’ “Catholic France” pilgrimage. As a chaplain of the Sacred Heart Sodality, the visit to Paray-le-Monial and the tomb of St Margaret Mary Alacoque was special. But a less expected grace was the leg that took the group to Aix-en-Provence and Marseilles, the places of St Eugène de Mazenod, founder of the Oblates of Mary Immaculate. “My home parish is run by the Oblates, so they had a great influence on me,” he notes, adding that if the Holy Spirit hadn’t guided him to the diocesan priesthood, he might have become an Oblate. The Masses at St Eugène’s tomb in Marseilles and in the very room where the saint founded the Oblates in Aix-en-Provence are unforgettable.

A man of many talents, Fr Ndlovu is also blessed with an exquisite singing voice. When he arrived at the funeral of Bishop Emeritus Zithulele Patrick Mvemve of Klerksdorp in July, he noticed that there was no singer. With 20 minutes to go, he offered his services — despite having just recovered from Covid-19, which affected his voice and breathing. Nobody in the congregation noticed these limitations.

Fr Ndlovu has been singing all his life, starting in primary school. His family loved singing, and he was a member of the parish choir which he later conducted. At St John Vianney Seminary he served as the house music conductor.

As a writer, Fr Ndlovu has contributed to several publications, Catholic and secular. The Southern Cross was among the first to publish his writings (he also wrote the prestigious Christmas guest editorial in 2018). Since then he has written for online platforms such as Spotlight.Africa, The Daily Maverick, The Thinker, The South African, News 24, Huffington Post,  and others.

Fr Ndlovu also serves on the boards of several organisations. He is the chairman of St Augustine College’s Foundation Trust and director of St Augustine’s Centre for Ethical Business Leadership. He also chairs the Ithemba Recovery Foundation NPC. His latest appointment is to the board of Play Africa, a Gauteng-based non-profit which is aimed at programming for play, creativity and social connections for young children. The appointment is one of a number of others he holds with a socially-orientated focus.

“I am wary of people who have no cause to champion or defend. I see my activism as my Christian duty. If we really take to heart what the saints and the martyrs of our faith stood for, we have no choice but to follow their promotion of the common good,” he explains. “I am fortunate that I have platforms that I can use to make my contribution.”

It is this commitment to his country and his fellow citizens which keeps Fr Ndlovu motivated to play his part in the improvement of our society. “I love my country, even with all its thorny issues. It’s the people, the landscape, the smells, the languages, the humour, and so much more that make me proudly South African,” he says.

In MAYIBUYE, Fr Ndlovu ends the preface with these apt observations: “We as South Africans stand at the door of choice. The choice is to continue with the known of the past 25 years or risking the unknown.  The unknown is the opportunity to do things right, and moving on to the next phase of our liberty with gusto and a new freshness and faith. It is a vision that drives all levels of our society.

“It is a call to every one of us to play our part in improving our country and people. For our teachers to teach. Our health workers to heal. Our police to protect, and our students to learn. It’s a different way, and one that we all know.”

Fr Ndlovu is determined to play his part in meeting this call.

MAYIBUYE is published by African Perspectives Publishing. Orders can be made through Rose Francis at francis@africanperspectives.co.za