Feet on the Camino 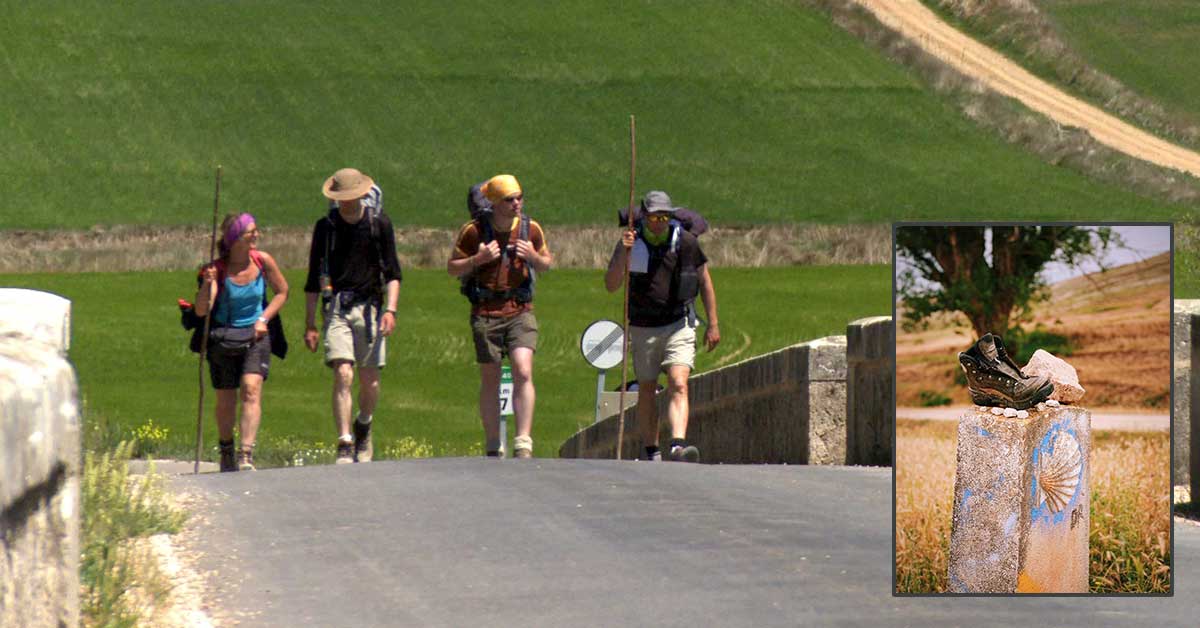 2021 is a Holy Year in Santiago de Compostela, the destination of the famous Camino de Santiago. What is behind this popular route for pilgrims and hikers?

In the 2010 film The Way, the great Catholic actor Martin Sheen plays a bereaved father who virtually stumbles onto the Camino de Santiago de Compostela. There he experiences community, compassion, self-awareness and healing. These are experiences reported by many who have made this ancient pilgrimage to the shrine of St James the Greater in the northern Spanish town of Compostela.

For Christians, the element of faith is obviously at the centre. As the pilgrims are separated from daily life, they have much peace and quiet to reflect and pray, surrounded by God’s creation. It is like a retreat with physical exercise. They also have opportunities to communicate with others on the same physical (and perhaps similar spiritual) journey, and in the process they may even receive clarity about their own lives. That is also the key theme in the film.

The common notion is that there is only one Camino de Santiago route, leading from France via northern Spain to the tomb of St James, the 1st-century apostle of Iberia and first bishop of Jerusalem. And, indeed, that route, and all those of northern Spain, are World Heritage Sites. But, historically, it was just one of a network of routes that led from all over Europe to Compostela, starting in the mid-1000s and really taking off in the 12th century.

Promoted especially by Pope Calixtus III (1119-24), the various routes were punctuated by pilgrims’ hostels, mostly run by religious orders who would accommodate rich and poor pilgrims alike. Before too long, the Camino was among the most popular pilgrimages in the world, even a cultural marker. In Spain, the popular name for the astronomical Milky Way is El Camino de Santiago; one fable tells the tale that the constellation had been formed from the dust raised by travelling pilgrims.

After its heyday in the medieval age, enthusiasm for the Camino declined over the centuries, though chapels for Camino pilgrims would still be built all over Europe, which suggests that it didn’t fall into obscurity either. But the great revival started in the second half of the last century, with the Camino becoming a phenomenon for pilgrims and secular hikers alike especially as of the 1990s. Today, hundreds of thousands walk the Camino every year.

Every route has its stations, or refugios: towns or villages where pilgrims stay overnight and receive stamps in their pilgrims’ credenciales, “passports” which prove that they have walked from one refugio to the next. A fully-stamped credencial, and a statement to the effect that they made their journey for religious reasons, qualifies pilgrims for a certificate, issued in Compostela and named after the town.

In medieval times, pilgrims would return home not with a compostela but with a scallop shell from the region of Galicia, where the town of Compostela is located. The scallop shell has become a symbol of all pilgrims, and especially of the Camino. Direction markers on the route can be identified by the depiction of a shell. 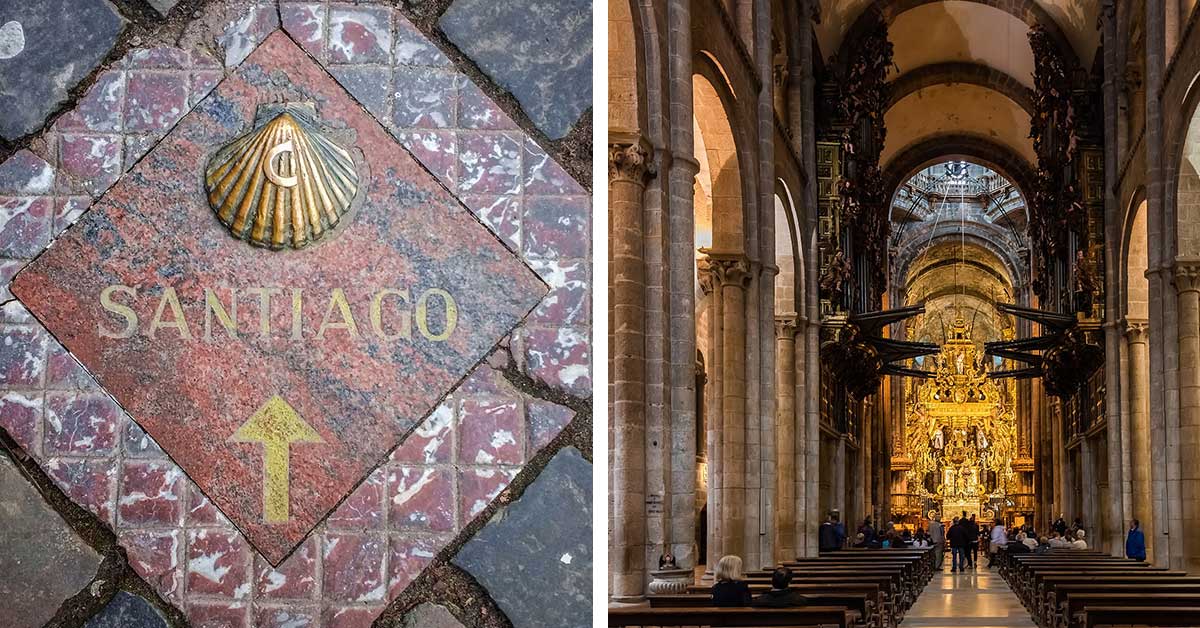 At the end of the Camino, peregrinos (pilgrims) attend Mass at noon or 19:30 in the cathedral of Santiago de Compostela, which dates back to 1211. With a bit of good timing, pilgrims may attend one of the solemn Masses at which the Botafumeiro, a huge thurible which is said to be the largest censer in the world, swings above the heads of the congregation. During Holy Years, such as 2021, it is used at all Pilgrims’ Masses. The Botafumeiro is filled with 40kg of charcoal and incense. Eight red-robed tiraboleiros pull the ropes of a pulley mechanism and bring it into a swinging motion almost to the roof of the transept, reaching speeds of 80km/h, dispensing thick clouds of incense.

And St James? His relics and those of two of his disciples, St Theodorus and St Athanasius, rest in a silver reliquary in the crypt below the main altar.

The year 2021 is a Jubilee Year for the Camino.

A Holy Year is celebrated in Santiago de Compostela whenever July 25, the feast day of St James, falls on a Sunday. The tradition of the Holy Year in Santiago goes back to the 15th century.

St James the Greater was the disciple who went to Iberia to evangelise the people there. After a slow start, he succeeded, according to tradition, thanks to an apparition of Our Lady in Zaragoza.

The hermit Paio discovered the purported tomb of St James in the 820s. With the support of the king, a sanctuary was created, and soon pilgrimages to the tomb flourished.

Pilgrims who walk to Santiago de Compostela during a Holy Year and pass through the Holy Door of the Santiago cathedral are forgiven all their sins through a plenary indulgence. 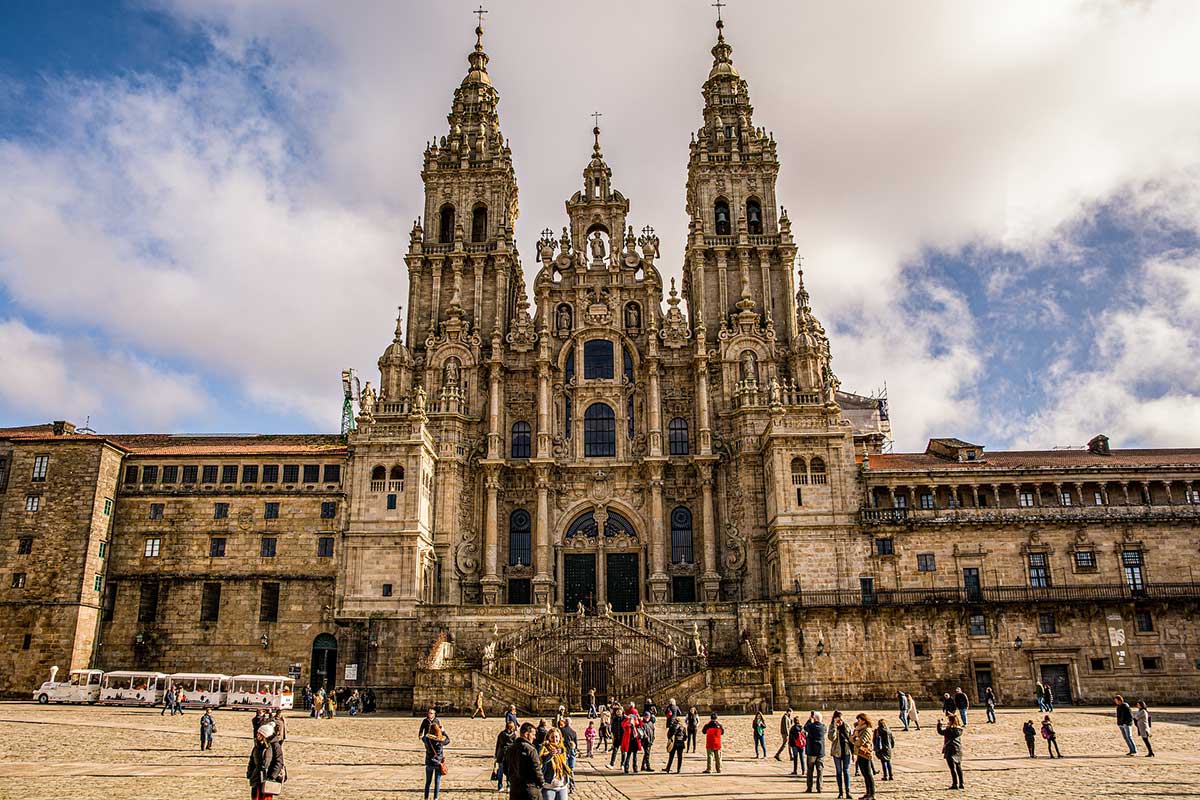 The cathedral of Santiago de Compostela

It requires of Catholics to visit the cathedral of Santiago de Compostela, say the Creed and/or the Lord’s Prayer, and ask for the pope’s blessing, attend Mass, and receive the sacraments of penance and holy communion in the two weeks prior or after the visit to the cathedral.

During Holy Years, many extra events are put on for the pilgrims in the towns through which the routes pass, and in Compostela itself.

Go on the Camino this year!

South Africans have the chance to go on a Camino pilgrimage in the Jubilee Year 2021. Organised by Fowler Tours in association with The Southern Cross and led by Fr Chris Townsend of Pretoria, the pilgrimage from September 12-21 will follow the last 100km on the most ancient of the Camino routes, the “Camino Primitivo”.

The Southern Cross pilgrims will stay in comfortable hotels with private rooms (sharing two to a room) and en-suites, with breakfast and dinner included. And the good news: their luggage will be transported from one destination to the next. So pilgrims need to carry only what they require for the day. Fr Townsend will be available for spiritual guidance, including the sacrament of reconciliation, for those who request it.

The Camino Primitivo (The Simple Way) is particularly scenic, following an ancient Roman trade route over five days. Beginning in the historic town of Lugo, it takes pilgrims through the heavily forested region of rural Galicia, where one can observe the Roman influence on Spain’s roads and bridges. (See map above).

Along the way, special places to see include the shrine of St Irene of Portugal near Pedrouzo, and the Monte do Gozo hill, from where one gets the first glimpse of the towers of the cathedral. In Compostela, the group will attend the Pilgrims’; Mass, with the huge swinging thurible, and benefit from the plenary indulgences of the Holy Year.

With one exception, daily routes are between 15-20km in length. The longest day, between San Roman da Retorta and Melide is 28,6km (but on flat terrain).  Everybody may walk at their own pace, and rest when they wish to. The paths are well-marked, and after Melide other routes join up, so there will be many other peregrinos to guide the way.

Pilgrims must be reasonably fit; if in doubt, consult your doctor before deciding to go. All participants will receive a training plan specially designed by a qualified fitness trainer.

Places on this special Holy Year Camino are limited. For more information or to book, contact Gail at info@fowlertours.co.za or call/WhatsApp 076 352-3809, or go to www.fowlertours.co.za/camino

This article appeared in the February 2021 issue of the Southern Cross magazine
Subscribe to receive more content like this.  There is a range of options – 3,6,12 months and print, digital or a combination subscription to both (for the same price!). Order latest editions or back-copies at R30 (plus R12 p&p) from admin@scross.co.za, or order online for your parish