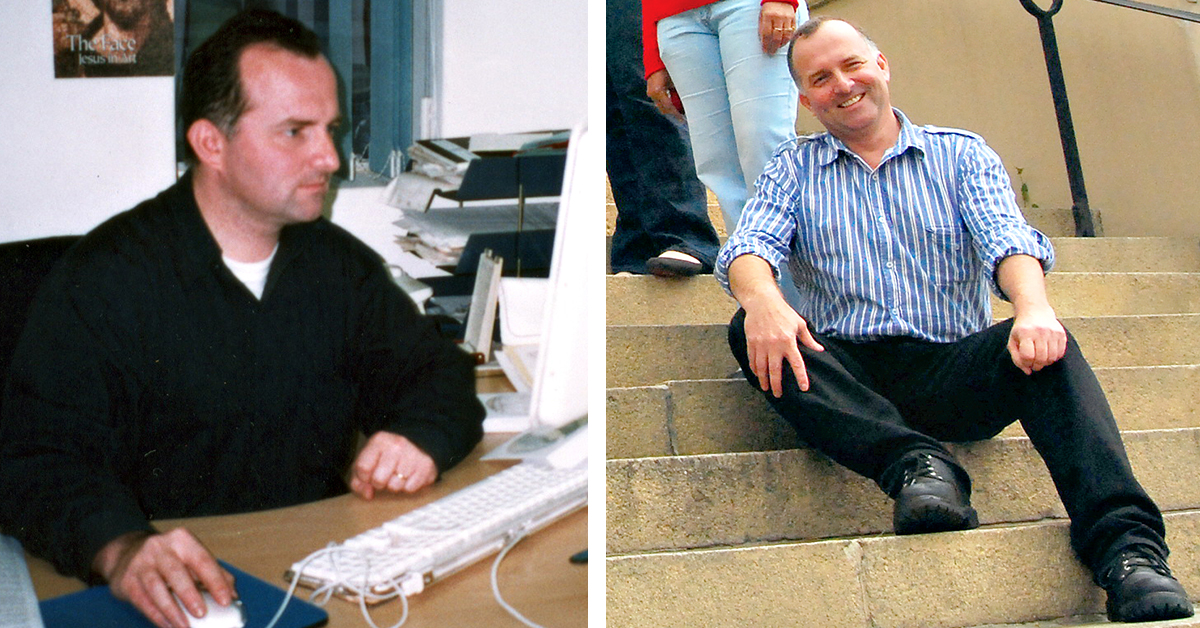 Left: Günther Simmermacher at work in 2002. Right: On the steps of St Mary’s Cathedral in Cape Town in 2010.

In February 2001, Günther Simmermacher became the editor of The Southern Cross. Here he reflects on the past 20 years, the present and the future.

Sometimes you look at the calendar and note with alarm a landmark anniversary of the kind that forces you to confront the relentless march of time. So it is this month, as I mark the 20th anniversary of becoming editor of The Southern Cross.

I might exaggerate my shock a little; early last year I observed the 25th anniversary of my employment with this publication in a short article in what then was still a weekly newspaper. Who knew that I would celebrate the 26th anniversary, and the 20th as editor, in my home-office, producing a monthly magazine instead of a weekly newspaper?

Which brings me to a question I’ve put to myself several times over the past few months: am I a happier editor of a newspaper or of a magazine? I’ve yet to arrive at a conclusive answer. I do miss the weekly cycle of news, working in an office with great staff, and seeing the result of our labour every seven days. But I really love editing this magazine, and I like to think that the enjoyment I derive in this relatively new task finds expression in an attractive publication.

In the task of producing a magazine I have also found a new creative energy which, after 19 years and seven months of editing the newspaper, had ebbed a little. The Southern Cross was a very good newspaper right to its end, but the formula was set.

One thing I do not miss (yet) is having to write an editorial every week. I’ve never acknowledged it, but many times I experienced something akin to stagefright before I set out to write editorials. They are hard work, but rewarding as well. They gave me a weekly opportunity — one I hope I used with integrity — to stimulate sensible dialogue.

There were times when that was particularly important. For example, the year after I became editor, the clergy abuse scandal broke in the United States. The response from the Church’s leadership was generally unimpressive. There was a need for journalists in the Catholic press to speak out forthrightly about the scandal. I believe The Southern Cross did so. It’s fair to say that I attracted both approval and hostility for what I wrote and published. In the long run, everything The Southern Cross said then about the scandal, even the most controversial points, is being said by the Church now.

In the world media

Over the past two decades, The Southern Cross has been influential in other ways, at one point apparently even playing a decisive part in the appointment of a cardinal. International media outlets, from the BBC to Time magazine to the Washington Post, have quoted The Southern Cross or interviewed me on diverse issues, as did Vatican Radio. I also graced our TV screens a number of times. In 2013, the Associated Press claimed, inaccurately, that  I had been The Southern Cross’ editor “for decades”, which rather conjured images of myself as a grizzled old sage.

But for all the validation this attention offers, that was never a primary motivation — and if it was, I’d have become quite frustrated, since the world media wasn’t exactly kicking in our doors daily in their unquenchable thirst for my pearls of wisdom.

Cliché as it possibly sounds, my incentive has always been to serve my Church, my God, and my readers. I am both a Catholic and a journalist, and it is a true blessing to live out my faith in my profession. My job really is a vocation.

Though not everybody has thought that I qualify to wear either of these hats. One reader decided that I was “a stinking goat”. Another speculated that my stated opposition to excluding gay men from the priesthood had something to do with such a rule preventing me personally from entering Holy Orders (I doubt my wife would have allowed me to pursue that path). Some criticism directed at me has been nasty, sometimes shockingly so.

But in my experience, almost all Southern Cross readers are good people from very different walks of life who show how Christ is active in their lives. Many I have travelled with on pilgrimages or met at functions. So many others I’ve never met, but I know of their love for The Southern Cross.

As I mark my 20 years as editor, this is my hope: that in decades to come, there will be more Southern Cross editors to mark their own anniversaries. Just…not yet. I’m hoping to stick around for a little while yet.