In Preaching: KEEP IT REAL 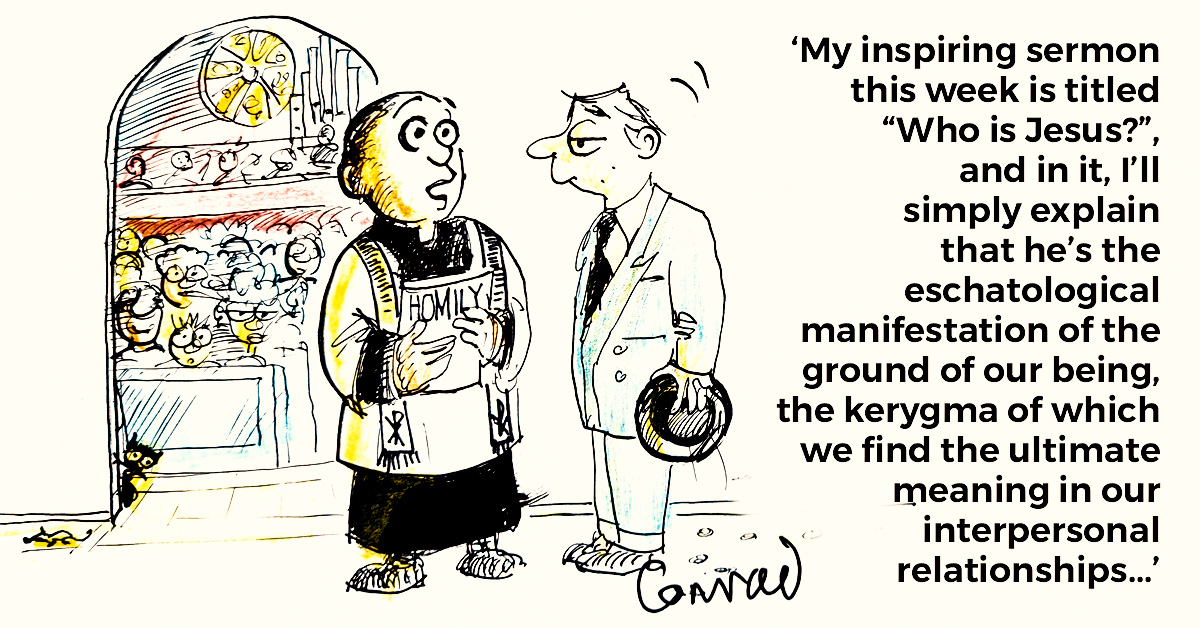 Homilies and other forms of public speaking can be undermined by abstract and jargon-filled language which few can follow, Fr Chris Chatteris SJ argues. It’s better to use concrete examples when addressing crowds, as Jesus did when he spoke to people.

In his hilarious 1966 book Gobbledygook Has Gotta Go, John O’Hayre gives a wonderful example of the pitfalls of abstract language. According to O’Hayre, this is what the followers of the US statesman Benjamin Franklin believed about voting, which some of his opponents were proposing to make dependent on ownership of property. As an experiment, see if you can follow the argument!

“It cannot be adhered to with any reasonable degree of intellectual or moral certainty that the inalienable right man possesses to exercise his political preferences by employing his vote in referendums is rooted in anything other than man’s own nature, and is, therefore, called a natural right. To hold, for instance, that this natural right can be limited externally by making its exercise dependent on a prior condition of ownership of property, is to wrongly suppose that man’s natural right to vote is somehow more inherent in and more dependent on the property of man than it is on the nature of man.”

Did you get it, or was it gobbledygook? O’Hayre notes that Franklin himself knew that no one would wade through that word-swamp and come out alive, and so he put it thus: “To require property of voters leads us to this dilemma: I own an ass; I can vote. The ass dies; I cannot vote. Therefore, the vote represents not me but the ass.”

This succinct summary makes his point with a concrete, down to earth example to which hearers or readers can easily relate — a donkey. The humorous example also mockingly reduces to absurdity the position which Franklin is attacking. These three elements together — concreteness, a familiar and funny image, and brevity — make the Franklinite policy clear, attractive and memorable. All communicators, including preachers, should take a leaf out of his book: keep it concrete.

Whether we are parents dealing with children, teachers educating students, civil servants informing the public, clergy preaching the Gospel, it’s our job to do the job with clarity and, as Sean Lovett of Vatican Radio once suggested, with creativity. This almost always involves the use of the concrete. A splendid Arab proverb on the power of concreteness in communication itself uses a concrete image: “The good orator turns the listener’s ears into eyes.”

The practical argument for concreteness, Protestant theologian Fred Craddock suggests, is that “we are seeking to communicate with people whose experiences are concrete. Everyone lives inductively, not deductively. No farmer deals with the problem of calfdom only with the calf.”

I’d like to suggest that for Christian communicators, concreteness is actually not an optional extra. Craddock argues that “images are not in fact to be regarded as illustrative but rather as essential [my italics] to the form and inseparable from the content of the entire sermon”.

It seems to me that we have to agree with Craddock for two reasons. Firstly, because of the concrete style which Jesus himself used when communicating the Good News, especially in the parables. If concreteness was good enough for the Lord, then it should be good enough for those of us who also try to communicate his message.

Secondly, and more theologically, the incarnation itself is a divine endorsement of the concrete. Abstraction has its place in communication, but it comes in clear second place as far as God is concerned. In our Judeo-Christian tradition, God speaks through the real events and people of history and, in the fullness of time, through his Son the Word made flesh. “The method is the message,” Craddock pithily puts it.

The incarnate Word, who is a concrete expression of God’s love for us, comes speaking in the concreteness of parables, about fig trees and lost sheep, new wine and the weather. Since these things were created through him, and have been embraced and sanctified by him in his preaching and in his very being, they are not only useful, but are also sanctified and placed at our disposal for the purpose of our preaching ministry.

But despite all this, communicators are always tempted into abstractions. Craddock maintains that “a fear of concreteness runs through the history of the Church to the present day”. The fact is that preachers are trained to express themselves in the abstract. For Catholic clergy, this begins in philosophy studies, where we delight in talking about things like “metaphysics”, “ontology”, and so on.

Here are some philosophical theses for the final exams of a Catholic university (which shall remain nameless). “The categorical syllogism and the hypothetical syllogism”; “The hylomorphic composition of the universal essence of sensible substantial beings.” You can’t make this stuff up!

These things are all very well for the necessary mental gymnastics that help a student limber up for the study of theology. However, the young student should be told, at the outset and frequently thereafter, that such abstract concepts are technical language and are completely incomprehensible to most listeners. And even someone who understands “hylomorphism” or “mundanity” might not necessarily want to hear about them in a homily.

Why do we use jargon?

This is not to say that ministers of the word are the only culprits here. We have all been baffled by computer techies who cannot express themselves except in their own abstract jargon. We all do it. Every speciality generates its own jargon, no matter how humble. An Italian professor tells the story of how he was having his hair cut one day when an item came up on the TV in the barber’s shop. The police spokesperson was telling the reporter that some thieves were caught with the help of “canine auxiliaries”.

“Professore,” the barber asks, “what are these canine auxiliaries?” The prof replies: “Dogs.” At which point the barber looks at his mangy hound on the floor and remarks how amazing it is that he has had a “canine auxiliary” all his life and was never aware of it!

Why do we do use jargon? Well, for one thing it makes us sound more important and learned and profound. Or perhaps we’re afraid of sounding too folksy and corny if we’re down to earth (and folksiness and corn can make people cringe if overdone).

Another reason is that to be concrete is harder work than to be abstract. To seek out the right image to do the communicative job requires thought, research and imagination. It’s much easier to waffle away with abstractions learned in philosophy and theology than to nail the point down with an appropriate image or story.

The following is a parody, but it does make the point about the difference between Jesus’ concrete and parable-filled way of expressing himself, and that of some learned preachers. The quote is sometimes attributed to Paul Tillich, but I have been unable to track down the source:

And Jesus said unto them: “Who do you say that I am?” And they replied: “You are the eschatological manifestation of the ground of our being, the kerygma of which we find the ultimate meaning in our interpersonal relationships.” And Jesus said: “What?”

Read part one of Fr Chris Chatteris’ series on preaching