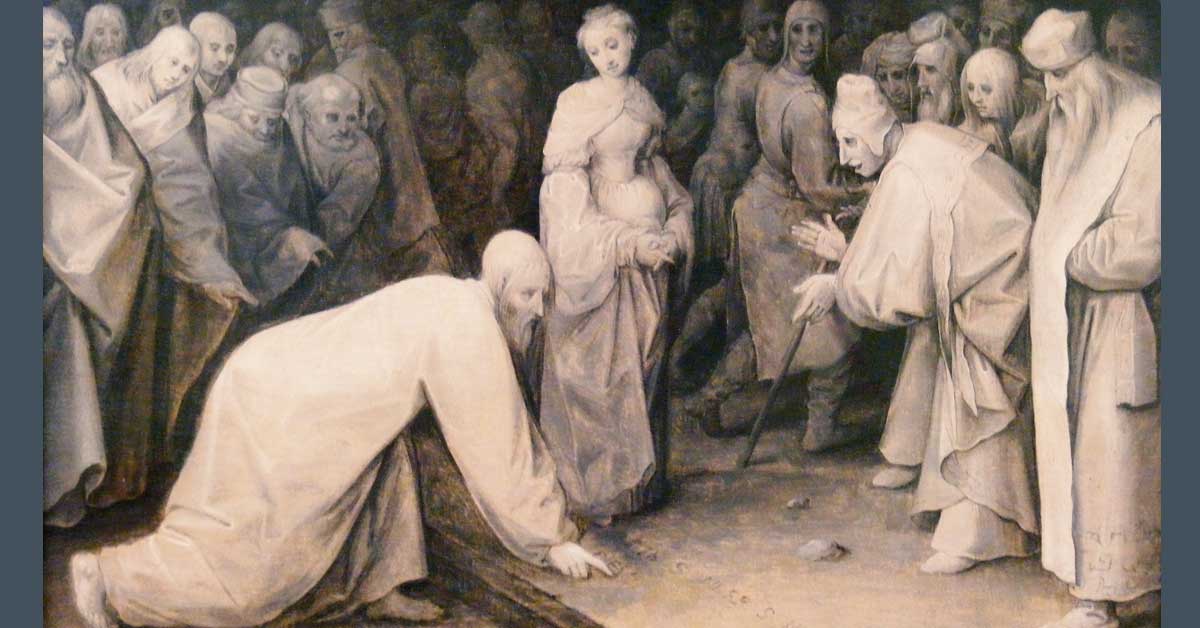 (Painted by Jan Brueghel the elder)

The bible tells us that a woman guilty of adultery was to be stoned to death. Yet adultery involves two people. I’ve yet to hear what happens to the man in this case. Can you explain, please?

You are probably referring to John 8:3-11 where the scribes and Pharisees showed Jesus a woman caught in adultery, reminding him that the Law of Moses commanded that such a woman must be stoned to death.

Rabbinic tradition understood Moses prohibition of adultery as applying only to a married woman and not to a married man. This was because the man had authority and rights over his wife. In the act of committing adultery she challenged that authority and violated his rights and, as Moses prescribed, was to be punished.

If he had sex with another woman, there was nothing she could do because she lacked the legal status to do so, unless her husband had sex with a married woman, in which case both guilty parties would be deserving of the harsh punishment (Deuteronomy 22 and Leviticus 20:10). The woman presented to Jesus must have been lawfully married. Whether her adultery was recent or not, there is no mention of her husband being among her accusers.

The Old Testament does not record any instance of a woman being put to death for adultery. The Talmud required the evidence of at least two witnesses and a formal investigation, which must have made adultery difficult to prove. So, perhaps the scribes and Pharisees did not really expect to stone this woman to death but they used her just to taunt Jesus in the hope of making him contradict the Law.

In daring the men to throw the first stone, Jesus affirmed the woman’s dignity as equal to that of men. She was not to be seen as a mere thing but as a person who had sinned, exactly as they were persons who had sinned.

Jesus taught that husband and wife have equal rights (Matthew 19:3-9) and St Paul made no bones about this when he wrote: The wife has no rights over her own body; it is the husband who has them. In the same way, the husband has no rights over his body; the wife has them (1 Corinthians 7:4). Paul also taught that husbands should love their wives as Christ loved the Church (Ephesians 5:24). That is dying for them.

Husbands could get away with infidelity under the old Law, but certainly not since Christ gave us his unmistakable teaching.