Pope: Church needs to hear God speaking through those who are hurting 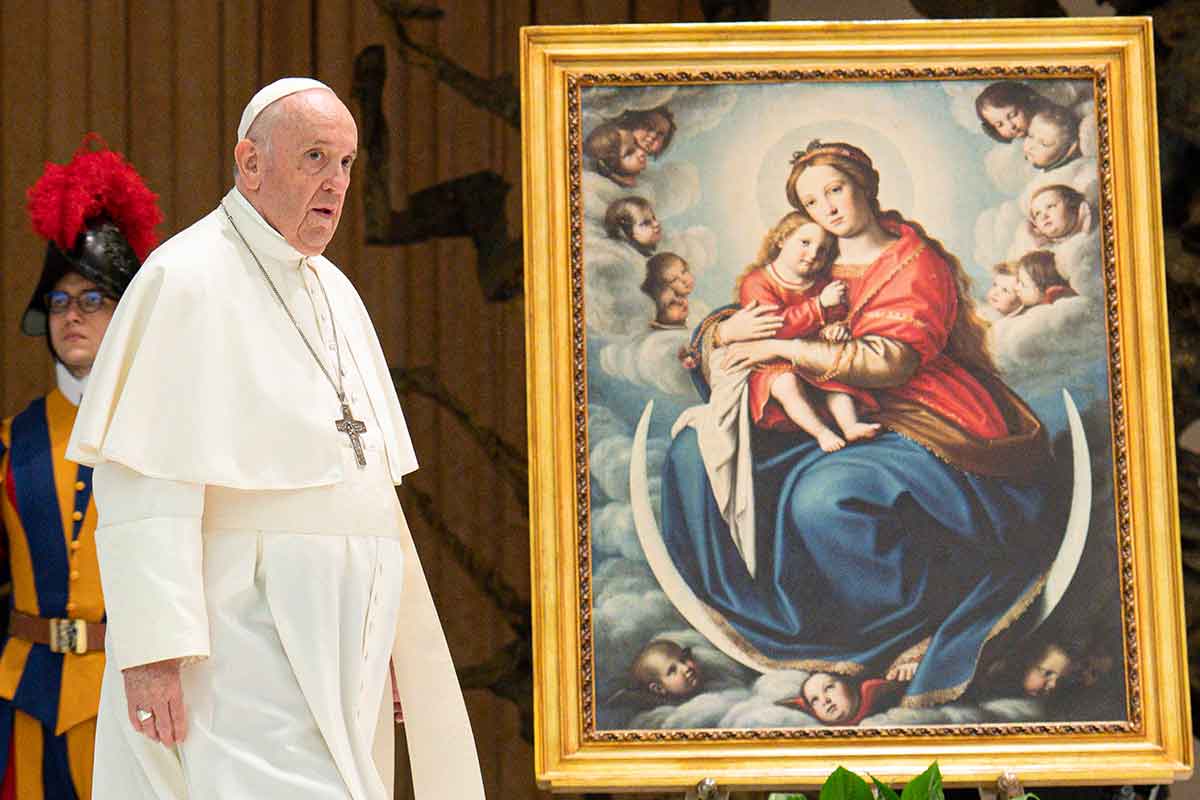 Pope Francis walks past a Marian image during an audience with the faithful from the Diocese of Rome at the Vatican on Sept. 18, 2021. (CNS photo/Vatican Media)

By Carol Glatz – To listen to the Holy Spirit, members of the church must listen to each other and especially to those who are marginalised, Pope Francis said, explaining how dioceses are to help the church prepare for the Synod of Bishops.

This means that, for example, “the poor, the homeless, young people addicted to drugs, everyone that society rejects are part of the synod” because God says they are part of the church, he said.

“So often the ‘rejects’ become the ‘cornerstones’ and those who are ‘far off’ become ‘near.’ The marginalised, the poor, those without hope were elected to the sacrament of Christ. This is the way the church is,” he said.

The pope spoke to members of his diocese, the Diocese of Rome, in the Paul VI audience hall on Sept. 18 as the global church gets set to begin a “synodal journey” toward the 2023 assembly of the Synod of Bishops, discussing the theme, “For a synodal church: communion, participation and mission.”

Pope Francis is scheduled to formally open the synod process at the Vatican Oct. 9-10, and the bishop of every diocese should open the process in his diocese Oct. 17. The diocesan phase, which runs until April, will focus on listening to and consulting the people of God.

The pope apologised for speaking at great length, but he said that as the bishop it was important that he explain how the synodal process should work and why.

Essentially, he said, it will be a period of mutual listening in which everyone – cardinals, bishops, priests, religious and laypeople – plays a leading role and “nobody can be considered a plain bit player.”

The purpose is not to collect everyone’s individual opinions, he said, but rather to hear what the Holy Spirit is quietly – and perhaps surprisingly – saying through them.

This will require everyone to dialogue in a way that is “familial,” where everyone recognises their common humanity, reconciles differences and reaches out in order to encounter and engage with others, he said.

“One of the evils of the church, rather, a perversion, is this clericalism that separates the priest, the bishop from the people. A bishop and priest disconnected from the people is an administrator, not a shepherd,” the pope said.

The synodal journey will require discussing viewpoints and expectations that are different and seeking out people who have been alienated “to hear not what they say but what they feel, even the insults,” he said.

“The Holy Spirit in his freedom knows no boundaries, nor does he allow himself to be limited by affiliations,” he said; if the parish is not to be “an exclusive club, then I suggest you leave doors and windows open” so everyone can be welcomed.

No one should be afraid, impatient or “rigid” in interpreting whatever difficulties emerge, he added, as long as people remain open and docile to the Spirit.

“God is not in a hurry,” and he can see beyond present circumstances and contrasts, he said. People need to “acknowledge the freedom of God’s action and (make sure) that there are no obstacles that could keep him from reaching people’s hearts.”

After Christ’s death and resurrection, God did not leave behind a “vacuum” that has to be filled by people insisting on taking his place or demanding the church be modelled on their cultural or historical beliefs – leading the church to become like a country with “armed borders, guilt-mongering customs houses” with “a spirituality that blasphemes the gratuity of God’s engaging action,” Pope Francis said.

Instead, Jesus sent the Holy Spirit, who provides the “drive,” strength and ability to be witnesses in words and deeds of God’s unconditional love and his immense hospitality that knows no bounds or borders, the pope said.

This is the church’s path and a synodal church moves in the world knowing the Holy Spirit “will be with us,” he said.

“There will always be debates, thanks be to God,” he said, “but the solutions must be sought by giving the floor to God and to the voices of those among us: praying and opening our eyes to everything around us; living a life faithful to the Gospel, and examining Revelation according to a hermeneutic of pilgrimage” that began in the “Acts of the Apostles” and continues today.

Reading through Acts can “help us, showing us that communion does not suppress differences. It is the surprise of Pentecost when different languages are not an obstacle,” he said.

It will be thanks to the Holy Spirit that people will be able to “feel at home, different, but supportive along the journey,” he said.

Rather than “erecting hierarchical monuments,” he said, the church must make certain every feels “part of one great people, recipients of divine promises, open to a future where everyone can take part in a feast prepared by God.”

During this pandemic, the pope said, the Lord is encouraging the church’s mission to be a “sacrament of care. The world has lifted up its cry, shown its vulnerability – the world needs care.”