The All Saints Election 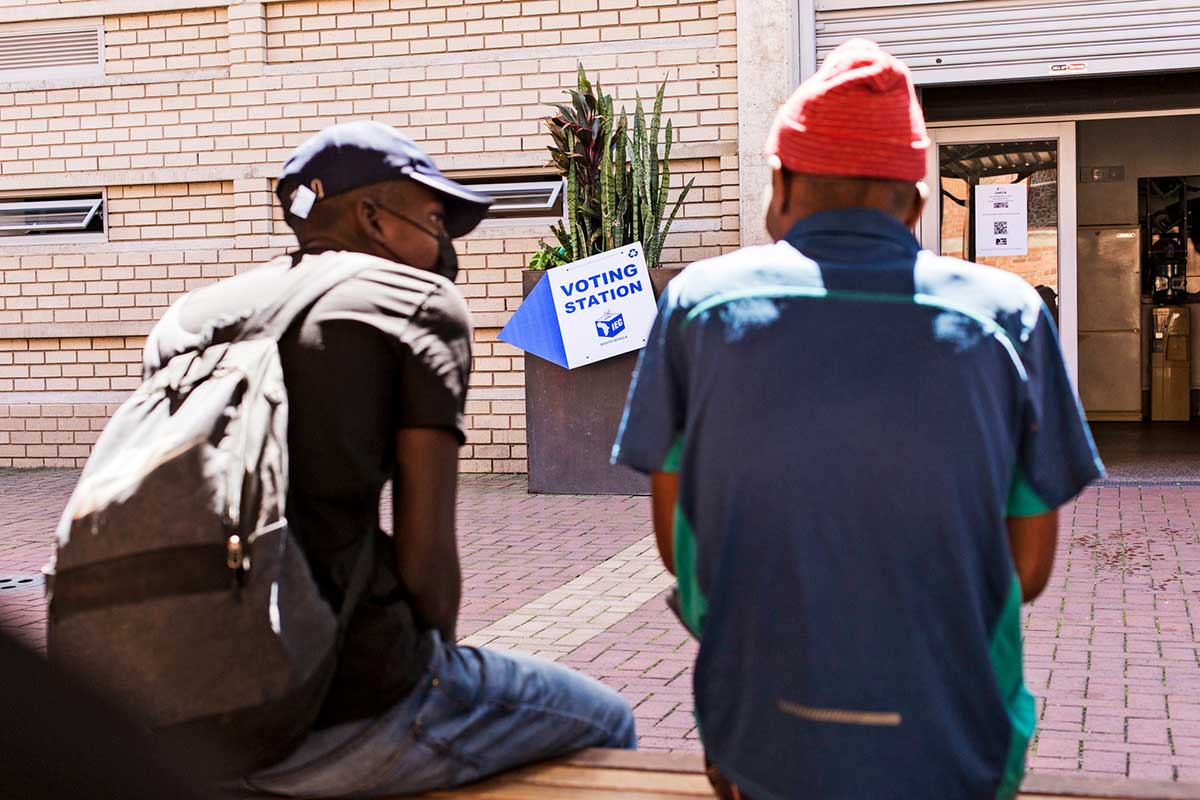 Two men at the Denis Hurley Centre in Durban who were among many homeless people registered as part of the IEC voter-registration drive working with the National Homeless Network. (Photo: Samora Chapman)

South Africa’s nationwide exercise in genuine democracy — the 12th since that world-changing moment in 1994 is today on All Saints Day. And I pray that it is peaceful, transparent, fair and truly participatory.

It is an interesting coincidence that these elections were delayed to November 1 — which is All Saints Day. Have we elected a group of saints to lead our cities and towns? Or have we mandated a group of demons whom we should have driven out on Halloween? I suspect a mix of the two!

At the Denis Hurley Centre in Durban, which I serve, we have taken a keen interest in these municipal elections because local government has more day-to-day impact on the lives of the homeless than either of the other levels, provincial or national. It is the actions and the inactions of local municipalities that can mitigate or exacerbate the conditions for people living on the streets. And it is also their policies that can make it easier or harder for people to find pathways out of homelessness.

This became abundantly clear during the hard lockdown at the beginning of the Covid crisis 18 months ago. The varying responses of the municipalities in assisting the homeless showed how much difference it makes who is in City Hall. Sometimes the response was speedy; more often it was delayed. Some politicians and local government officials took advice from the NGOs who understood the field, some did not, and some just ignored the advice they asked for. Some spent excessively without any sense of the value of how they were using our money; some were more judicious and worked with organisations which could deliver in a cost-effective manner.

The National Homeless Network, which brings together the main NGOs in the homeless sector from across the major cities, saw these municipal elections as a chance to consolidate this experience: to build on the good things that were achieved, and to learn from the mistakes that were made. Our National Homeless Manifesto focused on the five areas where municipalities can make the most impact on the lives of homeless people: Shelter, Sanitation, Healthcare, Security and Work.

These are the demands

But, as they say, the devil is in the detail. So the demands of this manifesto were not broad, national petitions which are easy for politicians to sign up for since they know they are too vague to tie them down. Instead, they were specific local demands, in these five areas, for each city.

Thus, under the heading of “Shelter”, the demand to eThekwini was to continue and upgrade the “Safe Open Sleeping Spaces”; under the heading of “Healthcare”, the demand to the City of Tshwane was to implement the agreed strategy of creating a street medicine unit to provide early intervention primary healthcare. There were similarly specific demands for each of the major metro areas. The local manifesto was presented to the parties and candidates competing for our votes to ask if they were willing to commit to these demands — and if not, why not.

The demands were not only specific and local: they are affordable, manageable and direct. In some cases, there is a cost involved, but it is much less than the cost of not doing something. As we have seen with Covid, keeping people well is cheaper than trying to rescue them when they are sick. In other cases, there is a cost-saving because municipalities often spend money on expensive law enforcement practices that actually do not solve the real problem. Just how much has the City of Cape Town achieved by fining homeless people, and what has it cost them in policing and legal fees?

We hoped that some politicians would sign up to this manifesto because they actually care for the poor, but pragmatically we also knew that some would sign up because they care about what ordinary voters think — and we would make sure that they knew that many voters (like you) do care for the poor. We are grateful for the way that parishes and individuals across the country have shown their support for this campaign by praying with the National Homeless Network for a good outcome in the elections and by informing their local candidates that issues that affect the homeless are also issues that affect them.

Some who supported the manifesto will be among those elected, and so this is “where the rubber hits the road”. Making promises is all well and good, but the test of politicians is in their ability to implement what they have promised.

Our duty to vote extends to an obligation to hold our elected politicians accountable. I would suggest that this is even more true of committed Catholic citizens. We have a clear overarching principle in politics — that decisions should be taken for the common good, that is for the benefit of all, not just an elite minority or even a tyrannical majority. Thus, helping the homeless find work is not just for their benefit, it is for the common good: it leads to a society in which people are able to look after themselves, are less likely to resort to crime, and in which all are contributing through taxes.

But the common good will not be achieved through a one-off action of voting. Rather it requires us to spend time understanding the issues in front of us, to make a prayerful and considered judgment about how to vote, and then to work with our elected rulers, by supporting them as well as by challenging them. Participatory democracy does not end at 19:00 on election day.

Speaking in 2013, Pope Francis reminded us: “We need to participate for the common good. Sometimes we hear: A good Catholic is not interested in politics. This is not true. Good Catholics immerse themselves in politics by offering the best of themselves so that the leader can govern.”

If this last part sounds difficult, let me suggest that local government is the best place to start. It is the only part of the democratic system in South Africa where we have a specific person — a ward councillor — whom we can actually meet and speak to face-to-face. If the only voices he or she hears are from people who care only about themselves, they will likely conclude that this is what all residents want. If they hear from caring Catholics who are devoted to the common good, they are more likely to believe that this is the popular thing to do (and also be reminded that it is the right thing to do).

Those elected on November 1 have a huge opportunity to do good: we invest immense power and a large share of our resources in local government. Pope Francis gives elected politicians two simple questions to ask themselves: “Do I love my people, so that I may better serve them? And am I humble enough to hear the opinions of others so as to choose the best way of governing?”

These are not easy questions to face up to: so on the assumption that most of those elected on All Saints Day are not (yet) saints, let us also commit to pray for our local leaders that they will govern us well.