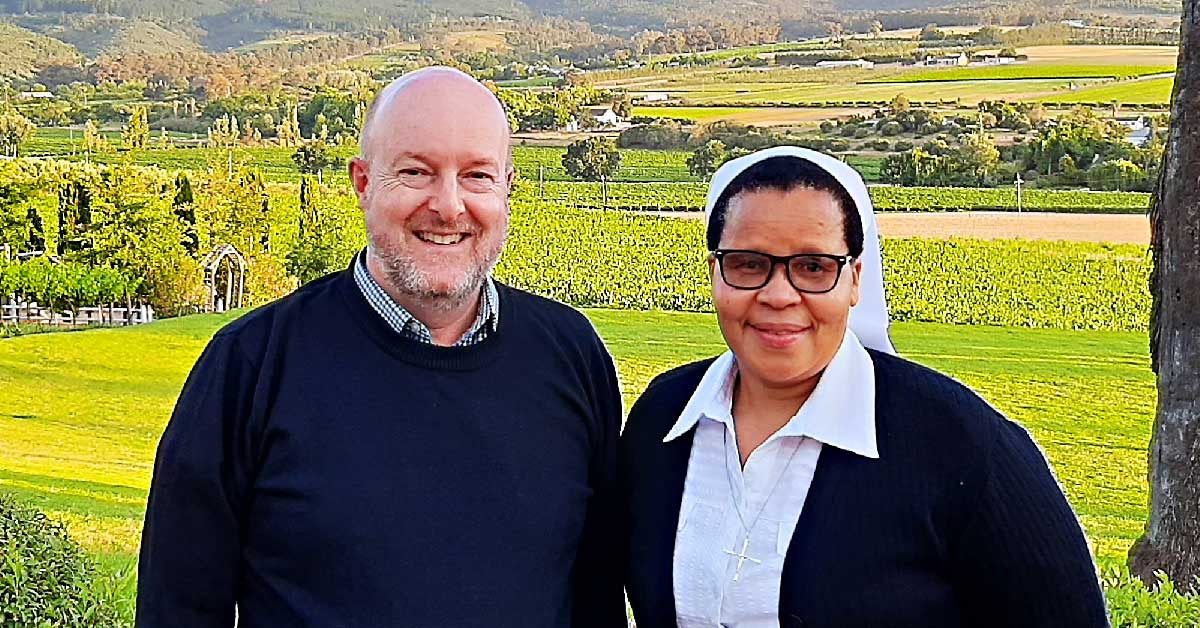 Fr Hugh O’Connor and Sr Phuthunywa Siyali, who run the secretariat of the SACBC.

Fr Hugh O’Connor and Sr Phuthunywa Siyali HC are in charge of running the daily affairs of the Southern African Catholic Bishops’ Conference. Daluxolo Moloantoa spoke to them.

The recipe is simple: “The ratio of We’s to I’s is the best indicator of the development of a winning team.” Motivational speaker Lewis B Ergen’s statement rings true for the duo that runs the secretariat of the Southern African Catholic Bishops’ Conference (SACBC).

The first year in office of the new team has been characterised by challenges and victories — and a number of important lessons along the way. Importantly, says Fr O’Connor, he and Sr Siyali have travelled that journey side by side. “Working as a team has been a wonderful experience,” he says. “I think that we make a good team as we both bring different gifts to the SACBC secretariat, and there is room for different views and visions. I could not have wished for a nicer associate, and consider myself very blessed.”

For Fr O’Connor, who will celebrate 25 years of priesthood on July 4, coming to Khanya House, the SACBC’s headquarters in the Pretoria suburb of Waterkloof, has been a leap. His previous appointments have been in his home archdiocese of Cape Town. One of these, however, concerned the Church throughout the SACBC region. Between 2006 and 2019, Fr O’Connor was a formator and lecturer at the national orientation seminary, St Francis Xavier in the Cape Town suburb of Crawford. In Pretoria, his office is adjacent to the national seminary, St John Vianney.

For Sr Siyali, the journey in the SACBC secretariat has been something of a mixed bag. “This position is overwhelming and yet in many ways a mystery to be unravelled. I realised that I would need to tap into the already prevalent culture of teamwork, and also open myself to new learnings. It was clear to me that I’d have to do a lot of compromising and letting go, and also to submit myself to the new and unknown road ahead. That was both stimulating and exciting for me.”

The SACBC was not a new experience. She had already served the bishops’ conference for eight years. From 2013 she was the coordinating secretary for culture in the Department for Christian Formation, Liturgy and Culture. This role included writing policy documents and training clergy and laity in matters of healing and inculturation. From 2016-19 she served as the liturgy coordinator in the same department. Her role involved liaison with the Holy See in making sure that liturgical documents were duly submitted for approval, recognition received, and so on. “All this work was done in collaboration with the executive committees of the various SACBC commissions. We received advice as to what is going on in the dioceses, so that we’d journey together with them,” she explains.

Previous to her SACBC work, she had worked in various posts in the diocese of Aliwal North, such as a diocesan catechetical coordinator, animator, and HIV/Aids coordinator. The honours graduate in theology is also a spiritual director and retreat director through the Jesuit Institute.

Women in the Church

Both SACBC leaders agree that women have played a major role in the Church, especially those who nurtured and provided education in the mission schools and congregation-run hospitals. “I think that the Church is taking a right direction in as far as women’s development is concerned. Women in the Church have always played a vital role, especially religious women in schools and hospitals. They might not have been recognised as such, but the decline of the religious congregations over the years has proven how crucial their role was in the past,” Sr Siyali says. “The impact they made is enormous and remarkable. They showed that women are capable of leadership in the Church, especially to lead in positions which were previously reserved for men.”

She notes that she is not the first woman in the SACBC to hold her position. In the 1980s, during the height of apartheid, Sr Brigid Flanagan HF served in that position, with Fr Smangaliso Mkhatshwa as secretary-general. In 2005 Sr Makoro became associate secretary-general, working with Fr Vincent Brennan, and later Sr Tshifhiwa Munzhedzi OP was appointed to that position. “This encouraged me to accept the appointment with the hope and knowledge that I will be supported by the leadership of the Church and the secretary-general,” Sr Siyali says.

The past year has brought many highlights for both of the current SACBC leaders. One that is still fresh in their minds is the October 2021 solidarity and pastoral visit to Eswatini, one of the three countries that make up the SACBC region, along with South Africa and Botswana. The visit came at the height of the government’s crackdown on protests and claims of human rights abuses.

“The truth is, whatever happens in Eswatini affects South Africa, and vice-versa. The pastoral visit was necessary for us since the diocese of Manzini, Eswatini’s only Catholic diocese, belongs to the SACBC,” Sr Siyali says. “We went to Eswatini to listen to all that they are going through, as well as to offer support to our Catholic faithful and the people of the country, as well as to Bishop José Luis Ponce de León. The mainstream media always gives us conflicting messages, and being in Eswatini gave us a closer look at the reality on the ground and what was truly going on.”

She believes that dialogue is needed in the kingdom. “Some neutral body needs to step in and help both the government and monarchy to engage in a serious and meaningful dialogue for all in the country. Prayers are not enough — something concrete needs to happen,” Sr Siyali emphasises. 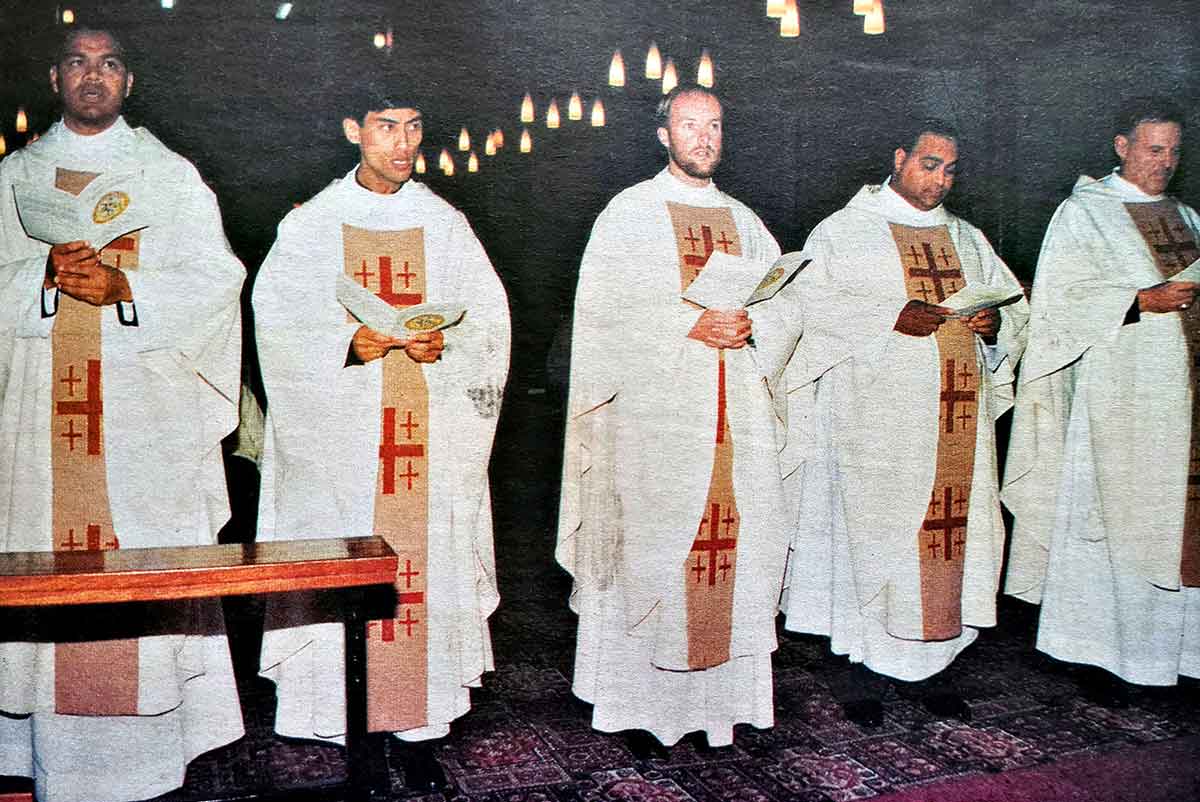 Sr Siyali and Fr O’Connor are roughly the same age. Fr O’Connor, whose father Patrick was a long-serving director on the board of The Southern Cross, is turning 54 on January 2. The priest has a natural sense of curiosity. At one point he qualified as an estate agent, simply out of interest. He has not practised that profession at all. So meeting new and interesting people, learning new skills, and being part of some thought-provoking discussions have been among the fulfilling aspects of his and Sr Siyali’s work.

Both say that they are motivated by being part of the processes that aim to make a difference in the life of the Church in Southern Africa. “The Church’s historical and universal role is to give guidance and support to the local Church, which are the dioceses,” Sr Siyali notes. The SACBC, as a coordinating body in the service of all dioceses, is part of that process.

At the moment the pastoral plan of the bishops’ conference — launched in January 2020 with the title “Evangelising Community Serving God, Humanity and All Creation” —  is a point of priority through the SACBC’s six departments. Another focal point is the process leading up to the 2023 Synod on Synodality. In the current diocesan stage there is a special priority on being a listening Church, with “Communion, Participation and Mission”, which is crucial in the work of evangelisation.

The SACBC is also concerned with the various challenges presented by the Covid-19 pandemic. “We are there to support dioceses and people who need healing and restoration,” Sr Siyali says. The SACBC is also working with the South African Council of Churches “to encourage our congregations to vaccinate and preserve life and protect one another”.

Fr O’Connor, who has a strong background in education in the Church, says the pandemic has posed a number of challenges which have required an appropriate response by the SACBC secretariat. He lists them as follows:

The Youth: What is going to happen with the youth in a post-pandemic Church?

The Elderly: The process for the re-establishment of ministry in the home, through extraordinary ministers of the Eucharist taking Communion to the sick at home.

Mass attendance: Will people come back to Church and what will worship look like?

The Synod: The Synod on Synodality is not being held for the sake of just holding a synod. Rather, the synodal process serves as an invitation to envision the Church in new ways — more listening, more dialogue, more respect, more discernment, more wisdom, more context, and more evangelisation.