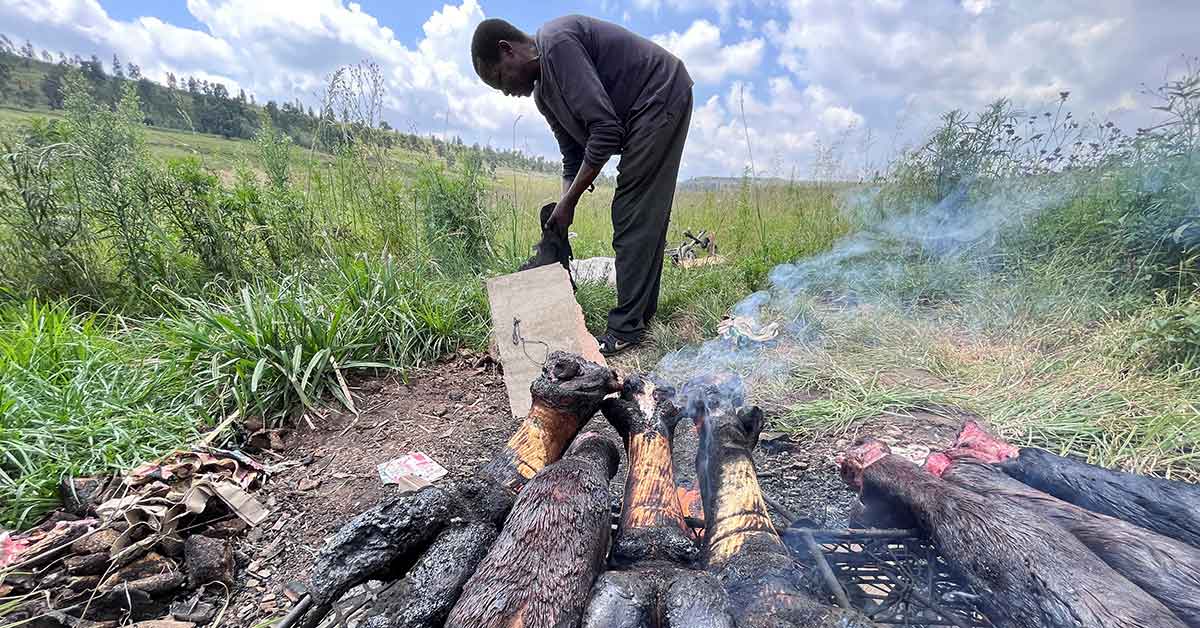 Sunnyboy Moseboa, 53, prepares cow feet before selling them to customers in Diepkloof, South Africa, Feb. 27, 2022. African bishops called on global financial institutions meeting in Washington to “help shape an economy that better protects the dignity and basic human rights of our sisters and brothers all around the world.” (CNS photo/Siyabonga Sishi, Reuters)

By Dennis Sadowski – African bishops called on global financial institutions meeting in Washington to “help shape an economy that better protects the dignity and basic human rights of our sisters and brothers all around the world.”

The April 20 meeting of finance ministers from leading rich and developing nations and the spring meetings of the International Monetary Fund and World Bank April 22-23 provide an opportunity for financial leaders to adopt measures that end isolation of poor and vulnerable people, said Bishop Sithembele Sipuka of Umtata, South Africa, first vice president of the Symposium of Episcopal Conferences of Africa and Madagascar.

“We are hopeful that delegates at the meetings are not meeting to merely discuss the global economy in terms of what it produces, but also … how it touches and promotes life, protects the dignity of the human person and protects the integrity of creation,” Bishop Sipuka, who chair’s SECAM’s Justice, Peace and Development Commission, said in an April 20 statement.

The spring meetings of the Group of 20 finance ministers and the IMF and World Bank come as the world continues to recover from the global pandemic, faces high inflation and responds to a war in Ukraine that has generated a worldwide response through wide-ranging economic sanctions of Russia.

The bishops’ statement expressed concern that while the pandemic has affected the entire planet, it revealed “how divided and unequal our world is,” because relief has been distributed unevenly.

“We are concerned that our region remains the least-vaccinated in the world, exposing our people to new coronavirus surges and economic disruptions and prolonging the crisis,” it said.

Eric LeCompte, executive director of Jubilee USA, an alliance of faith-based development and debt relief advocacy organizations working with SECAM, said the bishops feel it is time for the large global financial system to address the needs of Africa more fully.

“It became clear during the pandemic that Africa would see some of the most severe job losses and the most significant increases in extreme poverty and yet be left out of a lot of the response,” LeCompte told Catholic News Service.

“This was a significant concern of the bishops in Africa,” he added. “We wanted to work together more closely in global advocacy that looked at all the changes that are needed and all of the solutions that are needed to address this kind of problem. And also really lift the voice of those affected in Africa.”

The bishops’ statement reiterated calls by Pope Francis on the need for an economy that “gives life rather than one that kills.”

The negative effect that debt burdens have on African nations also concerns the bishops. The statement pointed to the size of the debt as a proportion of the size of the African economy rose from 60% to 70% as requirements on spending surged and revenues plummeted since the pandemic began.

In 2021, the IMF made available $650 billion in a financial tool known as Special Drawing Rights, or SDRs. The funds can be used to recover from economic downturns.

Africa came up short in the effort, the bishops said, as wealthy countries received $400 billion of the allocation while African nations received $33 billion.

“While the G-20 commitment to rechanneling $100 billion is a good start, we believe they can do more,” they said, suggesting that a new process for Special Drawing Rights allocations be established “at a level sufficient to at least triple the resources Africa receive last time.”

“World leaders should also review the method for distributing SDRs so their allocation is more aligned with recipients’ needs,” they added.

The bishops also called on the finance ministers and other leaders to implement viable wide-ranging plans to help Africa emerge from its economic crisis as well as to resume progress toward meeting the current list of the U.N.’s Sustainable Development Goals, the Paris climate agreement, and the African Agenda 2063 plan for economic and human development.