Priest takes on the inequality of women in African tradition

A WOMAN LIKE MUM: How Customs and Popular Sayings Contribute to the Discrimination and Violence Against Women, by Evans K Chama. Montford Media, 2011. 96 pp.

Zambian-born Fr Evans Chama’s book, A Woman Like Mum: How Customs and Popular Sayings Contribute to the Discrimination and Violence Against Women, is apt for our country and times. 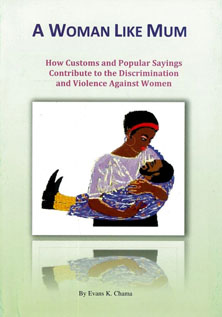 What is tradition anyway? Fr Chama is of the view that it is just “modalities of expression of concepts or truths”, meaning that we are not bound by it if it does not make sense to the development of our knowledge. We are obliged to keep tradition as a guide only “if it expresses the message not contrary to what we know as true”. But when it becomes a tool of oppression, it deserves to be ditched.

Who can argue that polygamy is not oppressive to women? Why don’t polygamists accept polyandry if it is such a good thing?

The book uses mostly data collected in sub-Saharan Africa. It starts by defining gender as a social construct before tracing the history of global gender struggle. It demonstrates how men have, throughout the years and still today, used gender discrimination as a means to dominate women. In almost all cultures of the world, Fr Chama argues, one’s sex determines one’s position in society in one way or another.

Fr Chama, an occasional contributor to The Southern Cross and currently a missionary in the Democratic Republic of Congo, offers many examples to argue his point persuasively. He also cautions against a parody of women’s rights that confuses an exchange of roles between male and female with gender equality; he instead advocates proper respect and dignity for the natural (biological) roles of both male and female.

So long as the stereotype of the role of women as serving to benefit men in marriage has currency, gender equality will remain an elusive wish. Marriage has to be a union of equals, but it cannot be like that if traditional practices such as paying lobola, bride dowry and so on persists. These practices objectify women as ornaments or merchandise to satisfy men’s whims.

Fr Chama disapprovingly quotes a Chinese’s proverb: “A wife married is like a pony bought, I’ll ride her and whip her as I like to send its point home.” Unfortunately such an attitude is still very prevalent in most African societies. Fr Chama puts the practice of paying lobola at the heart of this. Men who pay lobala regard their wives as property, exchanged and paid for in monetary values.

Fr Chama is not impressed with all the traditional explanations behind paying lobola: as a compensation for the upbringing of the girl (and who pays for the man’s upbringing?); for her virginity (when no value is attached to the man’s virginity); for the children she bears for the man (surely the children belong to both parents); as compensation since she is taken away from her family (is not the man taken away from his family too?); and so on.

Fr Chama concludes that the bride price is no longer a fibre of marriage but a tool of oppression. And it encourages women’s dependency on men. He finds even the idea of treating women as objects of beauty is demeaning to their dignity and stature since it defines and controls them through social expectation.

The book cautions against seeking “refuge in traditions whose structures have collapsed”. It admonishes against the deception of political correctness and tokenism of “special favours, like enacted laws”.

Fr Chama arms us for the battle ahead that demands transformation of both men and women towards a thinking society rooted in the human dignity of all, female and male.