Do we need to change the Mass to keep young Catholics in the Church? MICHELLE EVERT, herself a young Catholic, argues that doing so would be a disservice to the youth.

Scarcely minutes after Pope Francis had accepted the great weight of the Petrine ministry, the world’s media began touting predictions of the Church reforms they expected would transpire during his pontificate. One of the suggested reforms, proposed by the media and even some Catholics, was to change the way in which the Holy Mass is celebrated.

Increasingly, the Mass is being derided by some as a “relic of the past”, consisting of boring and antiquated rituals which, some argue, are driving the youth out of Catholicism and straight into the seductive arms of the evangelical and pentecostal mega-churches. 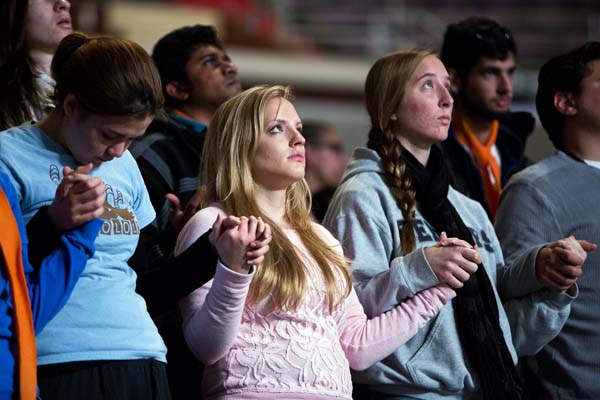 Young Catholics at Mass. In her article, Michelle Evert argues that the temptation to introduce new elements into the liturgy to appease young people would be misguided. (Photo: Rebecca E Drobis, CNS)

Is the current form of the Mass, and the way in which it is celebrated, relevant to youth today? Are young Catholics seeking something else in their quest for spiritual nourishment? Should the liturgy be altered to broaden its appeal to young people?

In attempting to respond to these questions, I would like to draw a distinction between the concepts of “relevance” and “reverence”.

Relevance concerns the degree to which something is useful or applicable at the moment.

Reverence refers to a profoundly deep feeling of adoration or respect, a state of true wonderment.

Many of the Protestant worship services—especially those of the evangelicals—appear to successfully use a form of relevance in appealing to the youth. They incorporate elements of modern pop culture, and their services try to convey God through what is “hip” or “cool” in our current milieu. This creates a socially lax rock-concert vibe. The dynamic pastor exudes boundless loud enthusiasm. Many promote consumerist faith products and some of these churches even have an indoor café, just in case you really needed a cup of mocha to guzzle down the Gospels with.

One can understand how, taken at face value, these kinds of superficial elements may appeal to the typical youth who wants absolutely everything instantly, and in the most exciting, entertaining and accessible manner possible. But in pandering to these perceived needs the youth might be done a disservice, for we are not a homogeneous group who can all be tarred with the same brush of frivolity.

There doubtless are youths who take a very shallow approach to matters of faith, but I would argue there are just as many (if not more) who are sincerely seeking an intimate relationship with God.

This is where the Mass comes in, because it goes beyond relevance, and appeals to reverence. Nigerian Cardinal Francis Arinze, the former prefect of the Vatican’s Congregation for Divine Worship, once said in an interview: “People don’t come to Mass in order to be entertained. They come to Mass to adore God, to thank him, to ask pardon for sins, and to ask for other things that they need. When they want entertainment, they know where to go.” He suggested the theatre, for a start.

The Mass is the only vehicle through which youth can have a truly personal encounter with our Lord, who is really present in the very sacrament which he instituted almost 2000 years ago at the Last Supper: the Eucharist.

The Mass has a majesty, beauty and serenity bar none. There is an otherworldliness to it. It is a transcendental experience and the closest thing we have to heaven on earth. It is this reverent form of worship that youth want, because we, perhaps more astutely than older generations, realise the problem with relevance is that modern pop culture changes so fast that it is nearly impossible to keep up with.

What is “in” this week, might just as quickly fall out of favour the next. A church which seeks to imitate the fads of our youth culture can only remain popular as long as those fads are popular.

So, while most evangelical churches have to frequently re-mould their identity and services to cater to the whims of modernity and remain relevant, the Catholic Church happily marches forward with a liturgy that is timeless, enduring and reverent.

Ironically, the Church and the Mass could actually be seen as counter-cultural—Christ’s words in the gospel of John remind us that we are in the world, but not of it—in a way that is actually conducive to appealing to youth who are looking to get away from the novelties of the mainstream.

Entertaining things at some point tend to cease being entertaining. Relevance is only relevant for so long. What Catholic youth need to be spiritually nourished with is full-on, unadulterated Catholicism, complete with its rich history, traditions and rituals. 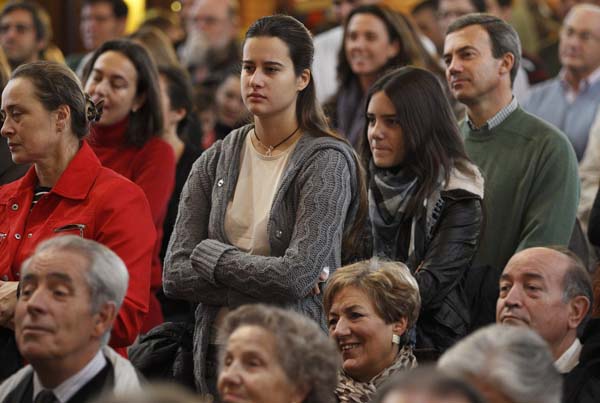 “If you never knew the true meaning of the Mass to begin with, how could you know that you are essentially turning your back on Jesus, and walking away from his real presence in the Blessed Sacrament?”

Cultivating a healthy reverence for the Mass is not a responsibility which rests solely on the shoulders of the youth, however. It is clear from the Catechism of the Catholic Church (1666) that it is expected of parents or other guardians to be accountable for the faith formation—and thus, an understanding of the Mass—of their children.

The “domestic church” is the first source by which young people imbibe Catholicism. If it is inadequate in any way, then the Mass becomes problematic because young Catholics are confronted with a stupendously brilliant and symbolic liturgy which they haven’t been equipped to understand. It is like going into an exam room without ever having opened a textbook to study.

This can lead to a false sense of “boredom” with the Mass, simply by not properly understanding it. If you never knew the true meaning of the Mass to begin with, how could you know that you are essentially turning your back on Jesus, and walking away from his real presence in the Blessed Sacrament?

Thus, despite what some may think, the Church will not retain young people via liturgical reform. Young people are kept in the Church by giving them a proper understanding of the Mass.

The salvation of young souls will not come through altering the Mass. That would be defeatist because our challenge is not to change the Mass to appeal to everyone (again, relevance), but to challenge them to change themselves and their understanding of it.

Cardinal Joseph Ratzinger, who went on to become Pope Benedict XVI, applied a useful analogy in his book The Spirit of the Liturgy. He relates how, in Exodus 32, the people lose their patience with Moses and start to worship God in their own way, because they feel God is “inaccessible”.

He uses this as a wise refutation to those who wish to reform the liturgy, whether it is to appeal to youth or for any other reason: “The narrative of the golden calf is a warning about any kind of self-initiated and self-seeking worship.” He added that liturgy “cannot spring from imagination, our own creativity—then it would remain just a cry in the dark or mere self-affirmation”.

Surely it is the Holy Mass which the youth desire, and not the Golden Calf in the forms of evangelical worship services or a revamped, “relevant” Mass.

Do we need to adapt the liturgy for the sake of the youth? You decide.