As you read this you will be about to celebrate New Year: January 1, 2014. Depending on your temperament, this might be marked by great jollying, intense introspection or a whatever shrug of the shoulders.

But the first time that you have to write the new date, you will be reminded that Old Father Time has run his course and that a new calendar has begun.

We are so accustomed to dates and calendars and new years that we forget how artificial the system is. By that I mean that it is an artifice  something human-made  rather than something naturally occurring.

Of course, the rotation of the earth around the sun does have a natural duration (a little longer than our 365-day year) and with it 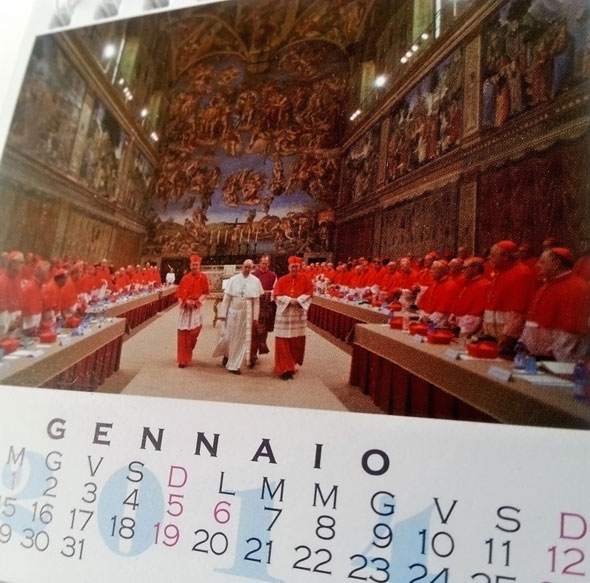 “…the Catholic Churchs year does not start on January 1, nor even on the first day of a month usually, but started a few weeks ago on the first Sunday of Advent (and has done so for 300 years)”

at least in some parts of the world  the moving through a cycle of meteorological and astronomical seasons. But it is clearly artificial that there is one day that marks the start of that cycle and that that day is the one we designate January 1.

It being a cycle, there is no particular reason to start a year at one time or another. So other cultures mark it at different times: for many peoples, spring is the reason to celebrate a new year though for the Chinese this is usually in February and for Tamils in mid-April.

On the other hand, some Nigerians have a new year in mid-June, the Jews celebrate Rosh Hashanah (the Head of the Year) in September, and the Gujaratis in October (just after Divali).

The French Revolutionary Calendar  that super-rationalist attempt to tie years and months to a regular natural progression  fixed the new year to the Autumnal Equinox around September 22.

Muslims have a new year festival at the beginning of the month of Muharram but  like all Muslim festivals  the date of this shifts with respect to the 365-day solar year since it is based on a 12-month/ 354-day lunar calendar. Thus, the Muslim new year happened on November 4 in 2013 but will fall earlier in 2014, on October 25.

Given the presence of so many cultures within South African culture  with perhaps the exception of French revolutionaries  it looks like we could arrange to have new year all year round and with it the subsequent hangovers!

But, I hear you protest, those are all other cultures and this is a Christian culture with a clear fix on what counts as the new year.

Well, not quite. After all the Catholic Churchs year does not start on January 1, nor even on the first day of a month usually, but started a few weeks ago on the first Sunday of Advent (and has done so for 300 years). The Orthodox Church celebrates New Year on what was January 1 in the Julian Calendar but is now January 14.

Not illogically, Christian countries have at various times marked the new year at Christmas (in Germany until the 13th century and Spain until the 16th century) and at Good Friday (in France through the Middle Ages, though this was especially tricky since the date of Easter moves every year!).

Many other parts of Europe (again with some logic) regarded the year as beginning on March 25, the feast of the Annunciation, since that was the beginning of the life of Jesus on earth. (In fact, this curiosity explains why the British tax year still begins on April 6 since this is what March 25 on the Julian calendar would now be under the Gregorian calendar).

The adoption of January 1 by Christian countries  and its later de facto adoption by the rest of the world  was very drawn out.

The date was in fact instituted by Julius Caesar in 45 BC; prior to that, rather confusingly, years re-started whenever a new consul was appointed.

Its Roman origins meant that January 1 was held in great suspicion by Christians and when it was finally adopted, it had to be Christianised as the celebration of the eighth day (count them) from the birth of Jesus. The eighth day was significant since it was, in Jewish culture, the day that Jesus was circumcised (though January 1 has subsequently been made more palatable to us: the feast of the Circumcision became the feast of the Name of Jesus and is now the feast of Mary Mother of God).

Thus, the first Christian countries to adopt January 1 as New Year, such as Ukraine, did so only in 1362; Catholic Europe waited until the Gregorian calendar reform in the late 1500s; and the British Empire (and so in effect South Africa) not until 1752.

The difference in calendars meant that if you travelled between France and Britain, you could leave Calais on March 20, 1600 and arrive in Dover later that same day on March 9, 1599  and this madness went on for 200 years.

This is all to say that the significance of January 1, 2014 is really quite random and that does not even begin to deal with the fact that it is probably 2018 years after the birth of Jesus and not 2014. But even though the electronic revolution means that writing dates on cheques or turning pages on calendars is a lot less common, we do feel the sense that a year has passed and want to mark it in some way.

The passing of time does matter, however we count it or name it. I was recently involved in BizSchool, a programme trying to equip 18-year-old South Africans with the skills they need to enter the world of study or work.

Time management proved to be one of the hardest skills to impart. It is too easy for us, especially when younger, to see time as an infinite and therefore expendable resource  maana or hakuna matata or jus chill.

Perhaps calendars can remind us that each year that God has given us is precious we do not know how many more we will have. And that each day within that year is an invitation to enter into Gods work; and that each minute within that day a chance to do something beautiful for God.

I wish you all that God wants for you for every randomly numbered moment of 2014.