What happened to Lazarus after his resurrection?

The reading from John’s gospel on fifth Sunday in Lent tells the story of the resurrection of Lazarus by Jesus. But what happened to Lazarus after that? 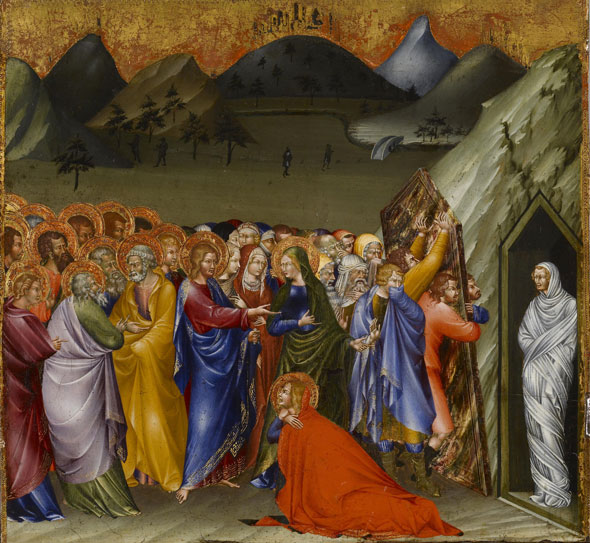 The resurrection of Lazarus by Giovanni di Paolo

Reports of Jesus raising Lazarus from the dead reached the high priest Caiaphas who took the story in bad part and no doubt contributed significantly to his decision that Jesus was upsetting the status quo and had to be dealt with.

John 12 recounts that the chief priests had plans to kill Lazarus as well since many Jews had been converted by the resurrection incident and were following Jesus. The Bible is silent on whether he avoided this fate or not and early Christian tradition offers a two versions on what became of the rest of Lazarus’ life.

The Eastern Orthodox churches teach that Lazarus and his sisters Mary and Martha left Judea and travelled to Cyprus where Lazarus became the first bishop of Kition and died of natural causes in 63 AD – 30 years after he was resurrected (according to St. Epiphanios of Cyprus). The tomb of Lazarus can be found in the city of modern-day Larnaca. The remains of Lazarus were moved to Constantinople at the behest of the Byzantine emperor Leo VI but were lost to history after the crusaders sacked Constantinople.
As the story goes, the Franks brought the remains back to Marseilles. However, a twist in the tale arose when restorers of the church in Larnaca found a sarcophagus with bones beneath the pillar of the Holy Altar in 1972. The word ‘friend’ was found inscribed of the sarcophagus. The findings confirm the tradition that a portion of the relic was left in the tomb in Cyprus after all.

The Western Church has Lazarus and sisters coming to Marseilles to preach the gospel and where Lazarus became a bishop. According to The Golden Legend – a medieval compilation of the lives of the saints by Jacobus de Voragine, Lazarus was captured and beheaded during the Christian persecution by the emperor Domitian. His body was supposedly taken to Autun in eastern France and buried under a cathedral there while his head remained in Marseilles as a venerated relic.

Thanks to John Sanidopoulos of Mystagogy and The Straight Dope for information.