To say that Pope Francis is shaking the Church’s establishment tree is to state the obvious—the birds have started flurrying and rotten fruit is falling. 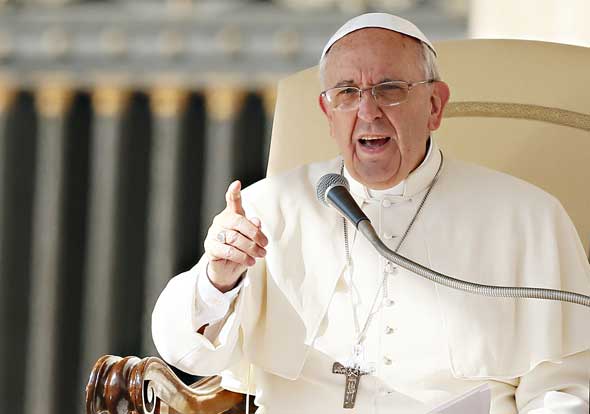 It is easy to measure the progress Pope Francis is making by judging the kind of enemies he is attracting: reactionary conservatives, red-claw free marketeers, fossil fuel companies and so on. I shall limit myself to talking today about the first of these.

By reactionary conservatism I don’t refer to good people who respect tradition and think it crucial for the sake of stability and continuity, which is the majority of Catholics. I mean those who are aggressively anti-modern and seek to return to a supposed “golden past” of how things were.

The reactionary conservatives in the African Church, for instance, are rallying against what they see as the pope’s more relaxed attitude towards homosexuality, with its real and perceived implications on same-sex marriage.

I do understand the concern towards an “imposing of certain values” on people who don’t agree with them, as Cardinal John Njue of Nairobi put it last month.

It is true that the majority of Africans do not accept homosexual relationships as a naturally occurring phenomenon. The question, for me, is whether, for the good of the society, it is correct to compel them into legal neutrality on the matter, even if you don’t ask them to change their moral judgment.

Take the example of capital punishment. I personally don’t believe in it, yet I know that were a referendum to be held in our country, those in favour of it would win by a big margin. Is it correct then for our Constitution to impose these values on the majority who don’t share them? This, I believe, is the question that requires our critical reflection.

The Kenyan bishops, through the chairman of their conference, Bishop Philip Anyolo, obviously disagree with the issue of imposing liberal values on Africans who are not liberal, and are aggressively campaigning to table the matter in the coming Synod of Bishops on the Family.

It would be interesting, incidentally, to have a summary of the answers to the synod questionnaire in the Southern African pastoral region after the parish discussion reports have been collated. This would help to complement the recent survey conducted by the Jesuit Institute.

On his visit to Kenya in July, US President Barack Obama tried to throw the cat among the pigeons on the homosexual issue by calling it a civil rights issue. Kenya’s President Uhuru Kenyatta begged to differ and relegated the matter to the periphery.

As such, homosexual activity remains a criminal act in Kenya, punishable by a maximum sentence of 15 years. I do not understand why other people’s sexual preferences should be criminalised if they are not harming another party.

There is, of course, a hypocrisy in African patriarchal culture. African patriarchy is ever so ready to treat with compassionate understanding the failures of married men to uphold the values of monogamy towards their spouse(s). Adultery is referred to, with a wink, as “one of those things”—“he’s a man, what did you expect?”.

The same applies in the Church’s patriarchy. A priest’s betrayal/failure of his promise of chastity often is treated with compassion and understanding. But the Church is harsh on those who break their marital vows, or remarried divorcees. Its tone is especially harsh on LGBT people.

This is the sort of thing Pope Francis is changing by applying the quality of mercy to the Church’s moral teachings.

Pope Francis is also flushing out the rust of reactionary conservatism that is clogging the arteries of the Church. The moral and social teachings of the Church should easily evangelise the world, without necessarily becoming of the world, when she changes her tone.

Pope Francis is the gift from the Holy Spirit to the Church. His tone is renewing not only the face of the Church, but that of the world also.

As it has been said: only 10% of conflict is due to difference of opinion — the rest is due to the tone of voice.